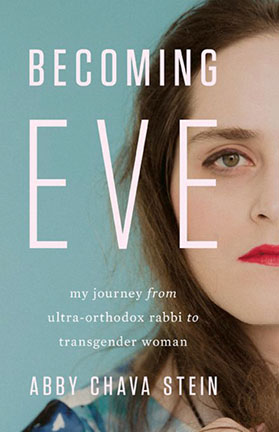 There are many possibilities. You can answer with ethnicity, gender, social stratum, or surname, mention your species, family origins, religion, or hobbies. So many things and yet, as in the new book Becoming Eve, by Abby Chava Stein, only one answer really matters.

Yisroel Avrom Ben Menachem Mendel was born on the 24th of Tishrei in the year 5752—or, for those who are not Ultra-Orthodox Jews, the first of October, 1991. The sixth child and firstborn son, Yisroel’s birth was the cause of great jubilation: one main forebearer was Baal Shem Tov, a holy leader and the founder of Hasidism. In their Brooklyn community, that made Yisroel a member of royalty.

Almost from the moment of birth, the future was set: Yisroel would follow the same path laid out for the males of the family, starting with ritual circumcision and religious observances, then yeshiva to study the Torah and Jewish law, marriage at age 18, and hope for sons to continue the line. There was no alternative. The entire family lived like this, like “eighteenth-century Eastern Europeans,” and had done so for centuries.

The exception came when then-four-year-old Yisroel insisted on having always been a girl.

Later, though other childish things were forgotten, those thoughts never were. They were constant, remembered, boxed up, ignored, or excused. Even when theological questions roared, when religious texts seemed to confirm Yisroel’s suspicions of girlhood, when sex—a subject no Ultra-Orthodox Jew was supposed to know about until days before marriage—made an all-boy yeshiva more bearable, questions of gender were suppressed. At 18, “matched” with and married to a woman who was nearly a stranger, Yisroel burned with envy that wearing a bridal gown would forever be denied. Naming their firstborn son was devastating.

“Oh, and gender?” says author Abby Chava Stein today. “It started punching me in the face.”

Set in a community that is meant only for adherents, author Stein’s story is told in rich detail that lets readers imagine everyday life with restrictions that most of us would chafe under, and without the internet, blue jeans, fast food, or English. These day-to-day details are relayed in a matter-of-fact tone that makes the severity of the “laws” seem even more astounding because of the seeming scarcity of emotion associated in their telling.

Stein’s lifelong question of gender almost seems secondary to those astonishments, but as the tale progresses, her demand for answers grows quietly in a way you almost won’t notice until it pounces on you. Whoosh, it’s a relief you never knew you were waiting for.

And yet, relief is fleeting: Stein leaves readers hanging by not including an up-to-date which could be frustrating in any other story, but this unusual book’s end still feels just right. For that, Becoming Eve is a most satisfyingly unsatisfying book, and you’ll love it no matter who you are. ▼