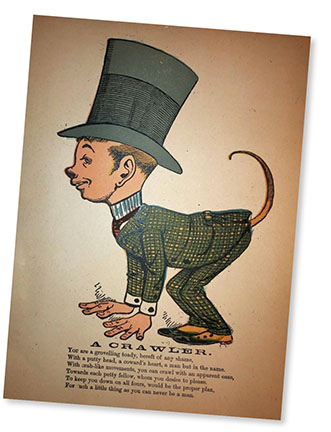 My first crush was on Skip Smith, a cute dark-haired boy with a big toothy smile. He was an extraordinarily accomplished skier, the best among our pack of mountain boys who hit the slopes every weekend in the winter months. In his tight jeans and mirrored Vuarnet sunglasses, Skip Smith was the epitome of cool—a Mick Jagger type on skis.

I remember holding my breath when it was his turn to pass out valentines in our seventh grade classroom. I grew up, you see, in the South and did not attend the most progressive middle school. There was no policy requiring you to give everyone in the classroom a valentine card. No way baby. It was the law of the jungle. The free market. One’s social standing and self worth were measured by how many cards were received from your classmates on February 14.

Luckily, I always received one from Skip. Don’t you know I would’ve been devastated had I been passed over. Other kids weren’t so lucky. You could see the shame and bitterness on the faces of those who received only one or two. Who ever decided this barbaric practice of exchanging Valentine’s Day cards in the classroom was a good idea?

It could have been worse. Have you ever heard of vinegar valentines?

By Victorian times in both England and the US it was becoming customary to send valentines to people you cared about. New manufacturing and printing processes were making it easier to produce them and entrepreneurs like Esther Howland in Worcester, Massachusetts, were launching companies dedicated solely to producing valentine cards.

Known as the “Mother of the American Valentine,” Esther grew very rich creating lacy valentines with images of cherubs and embellished with silk, ribbons, and paper flowers. She favored inside pockets to hold secret love messages and used flaps, folds, and springs to create the first “pop up” cards. Her valentines were lovely works of art and perfect to send to one’s beloved. Interestingly, Esther never married.

Just as popular as Esther’s creations were valentines designed to send to someone you didn’t like. These “vinegar valentines” weren’t fancy. They were primarily postcards with insulting poems and illustrations and meant to be sent anonymously. And get this—the practice of the day required the recipient to pay the postage upon delivery. Ouch.

The artwork on these vinegar valentines ranged from mildly amusing to downright cruel and often mocked some characteristic of the recipient: gluttons, drinkers, hen-pecked husbands, spinsters, bachelors, braggarts, cowards, lazy people, vain people, stupid people, ugly people, people who treated you badly, liars, cheapskates, spendthrifts, snoops, busybodies, dandies, and tarts.
As you might imagine, they were most prevalent in urban areas. New York publisher John McLoughlin was the leading purveyor of vinegar valentines in the US. His firm also sold paper dolls, children’s book, blocks, and board games. Cartoonist Charles Howard was the illustrator. So many vinegar valentines were sent one year in Chicago that the postmaster held back 25,000 of them as being unfit to send.

Politics often brought out the sour sentiments too. For example, the women’s suffrage movement inspired valentines targeting women who fought for the right to vote, challenging their femininity and motherhood. Not to be outdone, the suffragists sent their own cards to anti-suffrage men and politicians.

Vinegar valentines faded out with the advent of WWII and today there’s not much of a market for these cards. Any irreverent tastes tended toward funny humor and the sexually provocative cards we see today.

Not many vinegar valentines survived. Think about it. Would you save a valentine criticizing your growing waistline or receding hairline? Personally, I find them fascinating. I even own a few from the 1890s that are attributed to Charles Howland. My favorite is entitled “A Crawler,” which is a term for a person who uses excessive flattery to please another in order to gain a personal advantage. Ass-kissers. Sycophants. Politicians. In fact, I kind of think “A Crawler” bears an uncanny resemblance to GOP Senator Lindsay Graham, one of the worst brownnosers in the US Senate today.

I haven’t sent a Valentine’s Day card since the 7th grade and I’ve never sent a vinegar valentine. But, you know, given the way things are going in Washington it’s never too late.… ▼