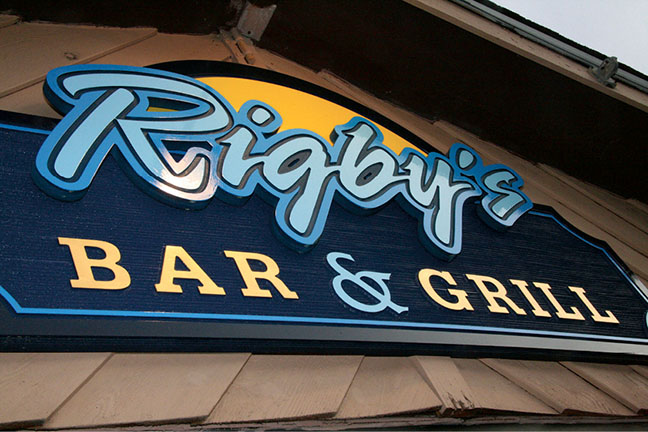 A fixture of Rehoboth Beach’s nightlife for the past 11 years, Rigby’s Bar & Grill is probably best known for its bar. The bar itself, although small, is the setting for big fun almost every night of the week. If you are in the mood to drink and sing, you can enjoy a moment in the spotlight during the karaoke parties held at Rigby’s each Wednesday, Thursday, Friday, and Saturday evening. On the other hand, if you would rather leave the singing to the professionals, there is live entertainment there on Sunday and Monday nights.

You would be doing yourself a disservice, however, if you always walk past the door to the dining room on your way to the bar. Rigby’s also is a contemporary American neighborhood bistro, which serves up simple home cooking at its best. Glance through the doorway and you will discover a charming space that seats about 50. The crisp white and azure blue walls are decorated with several pieces of artwork that add pops of vivid color to the room without overpowering it. The décor beckons you to come inside and pull up a chair.

My dinner companion and I stopped by Rigby’s on a recent Sunday evening. We were greeted promptly by our handsome server, Ricky, who guided us through the menu and offered us thoughtful suggestions about some of Rigby’s most popular dishes. His deep melodious voice made everything sound delicious! We were not surprised to hear that Ricky also serves as Rigby’s singing bartender on Wednesday evenings, and he has plans to audition for the television competition show, The Voice, next month. On this night, we were content to listen to Ricky singing softly to himself as he bustled around the dining room.

As we noshed on dinner rolls still warm from the oven, we studied the menu and made our strategic choices. My dinner companion decided to focus on seafood dishes, while I would concentrate on choices for landlubbers. We started our meal with a couple of appetizers. Kenny chose the shrimp cocktail. He got five large shrimp that quickly disappeared from their serving dish. I ordered the chicken quesadilla, which was served up quartered and artfully arranged on a small platter with sides of sour cream and salsa. The outsides of the quesadillas were a lovely golden brown, and the insides were filled with enough goodies to be tasty without becoming messy to eat. Delicious! The size of the quesadilla was large enough that it could stand alone as a small plate for someone with a smaller appetite.

No one would say that Kenny and I have small appetites, so we were ready to move to the entrées. Kenny ordered the wild salmon, which was pan-seared and flavored with house seasonings. It was tender and flaky. Kenny was just as impressed with the grilled asparagus that accompanied the fish. Like a culinary Goldilocks, he declared the asparagus to be “not over-cooked, not under-cooked, but just right!” My dinner selection was the flat-iron steak. It was grilled to perfection, drizzled with a blue cheese butter, and topped with fried onion straws. I intended to take a photo of the dish to accompany this review, but when it was placed before me, I totally forgot. I grabbed my fork and started enjoying! The meat was so tender, I could cut it using only my fork, and the blue cheese butter was a surprising but pleasing addition to the entrée. The rest of my plate was filled with fried smashed red potatoes and all in all, it made for a hearty meal on a cold winter’s evening.

It just so happened that it was “Chicken and Dumplings Night” the evening we visited Rigby’s. As a native of Maryland’s Eastern Shore, I grew up eating chicken and dumplings. I know what they are supposed to taste like, and I know that the chicken and dumplings served up in restaurants can often be bland and boring. My curiosity got the better of me. I convinced our server Ricky to bring me a small cup of the chicken and dumplings, just so I could sample it. I tasted it. And I was very pleasantly surprised. The chicken was shredded, the dumplings were appropriately slippery, and it all was deliciously seasoned. I learned that the dish incorporated rosemary, parsley, and thyme freshly harvested from Rigby’s own herb garden. Fresh makes all the difference.

We had a moment to talk with Rigby’s owner, John Black, before we left the restaurant that night. I told him that eating in a resort restaurant in the off-season can be risky for restaurant-goers. Sometimes when the kitchen and wait staff are not “busy and in the groove,” quality can suffer. That certainly was NOT the case with Rigby’s, which even on a quiet Sunday evening provided us with an exceptional dining experience. Rigby’s provides high quality food, made using local ingredients, available at a good price point, and served by friendly staff. We will definitely be back, and soon! ▼

Glen Pruitt has worked in Delaware’s HIV/AIDS field for the past 25 years. He serves as Secretary on the Board of Directors for CAMP Rehoboth, and he was delighted to write a restaurant review (instead of another set of meeting minutes) for CAMP Rehoboth this month.