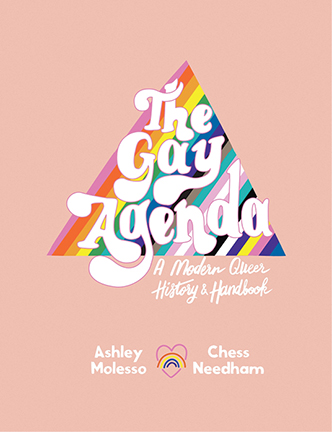 It’s been a minute since you came out.

And it was something of a process. You knew you were gay but announcing it (even quietly) was kind of scary, kind of exciting. Finally, you did it and you’re glad you did. Now read The Gay Agendaby Ashley Molesso and Chess Needham and learn about the people, places, and events that helped make that possible.

A couple of years ago, when their agent contacted them via Instagram, Molesso and Needham were given an opportunity to write about anything they desired. Anything, so they chose LGBTQ history and were embarrassed to learn “so little about those who paved the way for us to live out and proud....”

Though “gay stuff” has been going on forever, Molesso and Needham focus more on the last 120 years. Even so, they have short paragraphs about Sappho, the Warren Cup, and other important things in ancient LGBTQ history.

That history started to roll in earnest in the years prior to World War II, when sexologist Magnus Hirschfeld founded The Institute for Sex Research, attracting Europeans to Germany to “learn about their sexuality.” America’s first lesbian publication also printed before World War II, and “drag balls” were the rage for 1930s hetero dancers and queer folk alike.

The 1950s were a time for great upheaval. In 1952, homosexuality was described by medical professionals as a “mental disorder.” At that same time, gay men and women were openly discriminated against in most places, and the law widely allowed it.

Attitudes began to shift in the 1960s, which ended with the riots at Stonewall and showed LGBTQ people that they could stand up for their rights. In 1973, Lambda Legal helped them do that; also by 1973, being gay was no longer considered a mental illness.

The 1980s ushered in an alphabet of acronyms: PFLAG and GLAAD, but also AIDS. Brandon Teena and Matthew Shepard died in the 1990s and changed the world, and the new century? It brought hours-worth of LGBTQ people to our living rooms on TV.

Sometimes, you want to read but aren’t in the mood for anything deep. So, here’s your book: The Gay Agenda is light, serious fun.

There’s no big commitment when you’ve got this book in front of you. You can read a page or three; scan the colorful artwork for its own sake; skip around or read backwards; it doesn’t matter and that’s part of its appeal. Authors Molesso and Needham admit in their introduction that they’re aware of possible omissions within these brief thumbnails. But what’s here is a good start, serving to encourage readers to search for more themselves. You’ll feel as though you’ve been invited to dip in at the first page or the last, like jumping into a little kids’ ball pit and rolling around in facts.

While it’s likely meant for an under-25 audience, The Gay Agenda can surely be enjoyed by anyone with more mileage. Look for it—it’s out now.▼

Terri Schlichenmeyer has been reading since she was three years old and never goes anywhere without a book.Always Overbooked, she lives on a hill in Wisconsin with two dogs and 15,000 books.