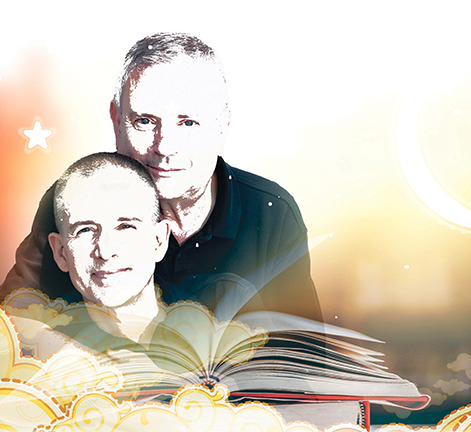 For the first time in 33 years we will not Sundance together at the end of the summer season. A small blip on the big screen of this not-at-all-normal year. A looming financial worry for CAMP Rehoboth.

I am still optimistic Sundance will successfully raise the money needed to provide financial support for the organization in the coming year.

I’m optimistic because I know from three decades of Sundance experience the generosity of our Hosts, Supporters, and Sponsors.

That will not stop me from saying right now, please, please become a 2020 Sundance Host, Supporter, or Sponsor. We need you.

Yes, I believe we will make it through this most trying of years, but I will miss the magic of Sundance. I will miss our time to dance together as a community. Now I’ve got a story to tell.

Life is a story. Its chapters filled with the comings and goings of ordinary days and nights. Ordinary, I say, only in our quite often too late understanding of how very remarkable it is to simply be alive.

From earliest age, we love fairytales, legends, and stories of adventure, bravery, and romance.

Yet we believe those stories exist outside of us—not in us. We are the story. In any given age of our lives, we climb high mountains, pull ourselves from deep valleys, and cross vast deserts. We are at once the hero and the fool, the captain and the servant, the criminal and the priest.

Children understand this instinctively. Alas, we forget it as we grow up.

The mountain becomes a pile of dirty dishes in the sink. The hero’s quest lies forgotten in a stack of unpaid bills. The superhero is stuck in a three-hour commute to the suburbs. The vision grows dim; the body weakens.

No matter how much we grow up, how much life piles up around us, there are pivotal moments where the magic still dwells.

I’ve told the story of Sundance and CAMP Rehoboth for decades. In the context of my own life both are intwined with the deep love that Steve and I shared—still share, though he no longer walks the earth at my side.

Fairytale? Myth? A touch of fate? A mystery greater than ourselves? We sense the legend, the story, that lives within each of us.

THE LEGEND OF SUNDANCE

Once upon a time two gay boys met in a big white house, fell in love, and set out on a romantic adventure. Along the way, they met kings (well, a president, at least), and an inordinate number of queens. They loved and laughed and danced and threw parties and spent idyllic summers by the sea.

Time passed, but all was not well, for a dark cloud of plague shadowed the land in sickness and death. The two boys escaped the shadow. Alas, many beloved comrades did not.

Desperate to end the scourge of the plague, the two boys gathered a remnant of their devastated tribe and joined the rising rebellion springing up across the land.

A cry was heard from coast to coast, “We will not be silent.” And the names of the fallen were stitched on bright pieces of rainbow fabric and laid out on the grass in reverent remembrance.

To fight the plague and celebrate their love, the two boys—who truthfully were no longer boys at all—sent forth an invitation to attend A Sun Dance.

Bewitched by the glittering mirror ball and flashing lights and cradled in the hypnotic arms of disco music, they did not yet understand the sun was rising on a new age. Nor did they understand the enchantment binding their hearts and minds to the dance—to the Sundance—and to the people and place where it was born.

Finding the enchantment too hard to break, the two boys—now men—built a camp nearby and set about making it a safe and welcoming home for all.

In time, the light shining forth on the front porch of the camp house became a beacon for all the world to see. The work was difficult, the hours long, and the years flew by as they so often do when life is busy and springs from the heart.

Over the years they fought for freedom, wrote endless letters, and eventually married as the new law of the land permitted.

Always they danced the Sundance.

But alas, there came a day when a great sickness descended upon one of the men. Never giving up, the two fought back time after time. Until no time remained, and the one watched the other take his last breath.

Under the weight of immense grief, the surviving man struggled on for a time, drawing strength and courage from the healing love of trusted companions and family, and the kindness of nearby villagers.

In the name of love, the people still gathered and still danced the Sundance.

Slowly the man recovered his balance. Understanding, at last, the undying nature of love.

Again, the grim face of plague arose to shadow the earth in sickness and dying. An acrid wind filled with malice and the foul stench of hatred spread across the land, manipulating fear and sowing malignant seeds of lies and divisions.

But even in dark despair, hope remained. Heroes rose to fight the plague, though many did not live to tell of their valiant deeds.

Separation and isolation became the way of the world. The man knew they would not dance the Sundance until healing came to the land and the people.

We will be united in love if not in person he reasoned.

And though he had no “happily ever after” ending to his tale, the man resolved to still Sundance. In solitude yes, but never alone.

Steve always joked he was a legend in his own mind. Aren’t we all?