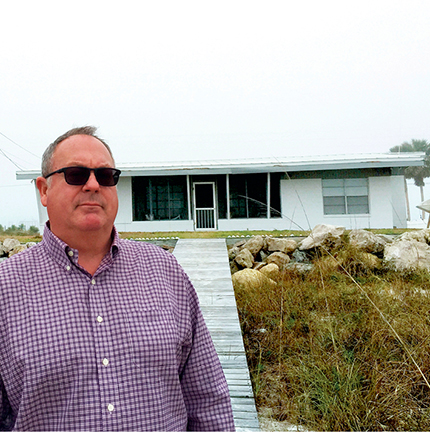 Time for a Change

One quiet morning in March, I quickly crammed 35 years’ worth of belongings into a big moving van and hightailed it out of my Georgetown DC apartment and across the Bay Bridge to Rehoboth as fast as I could. Shortly thereafter, the world shut down and my retirement and new full-time life at the beach officially began.

As of this writing, I’ve mostly integrated all the fancy furnishings into my little cottage on Columbia Avenue, and I have to admit it looks pretty damn good, if a tad on the formal side with all the mahogany furniture, Oriental lamps, and gold framed art. My basement, however, resembles some sort of crazy hardware store/junk shop emporium. The historic hoarders, the Collyer Brothers, would be pleased.

I’ve acclimated too to the new be-masked, socially distanced reality of life under COVID. And it’s had me thinking a lot about change. Anyone with half a brain knows we desperately need it in the White House. On a personal level, it felt like the right time to try some new things with my writing. You might not be aware, but this summer marks the 15th year I’ve been writing for Letters. That’s 225 columns, approximately 180,000 words, and about 140 days of work.

As I strolled around a mostly empty Rehoboth this spring, I found myself looking at houses that caught my eye and wondering who owned them and what were their stories? While trespassing and peeking into windows, an idea for a new column emerged. I should write about houses. After all, this entire town is obsessed with them—their location, size, style, décor, etc. Just look at all the “for sale” and “for rent” signs. I quickly landed on the name “CAMP Houses” for the column, both a nod to the naming protocol of the magazine and to the original houses built during Rehoboth Beach’s founding as a Methodist camp meeting in the late 1870s. I determined it would be good-humored in tone and not too serious. It would focus on both the home and its owner(s).

I’ve always been interested in houses. As a boy, I had the good fortune to reside in a wood and glass A-frame chalet surrounded by huge rhododendrons and overlooking a ski slope in the mountains of western North Carolina. I also spent most holidays with my maternal grandparents in Miami and I begged them every visit to take me to Viscaya, the grand Gilded Age mansion on Biscayne Bay built by the very wealthy and closeted gay socialite, John Deering, whose family owned International Harvester. I remember his bedroom had a door to a secret hallway that led to a special guest room.

Visiting my paternal grandparents during the summer was a completely different experience. My grandfather had built by hand a small cinderblock cottage on a narrow spit of sand called Alligator Point right on the Gulf of Mex-ico, southwest of Tallahassee, Florida. It was cracker rustic, but quite magical. My brother and I spent every day on the beach digging for colorful coquina clams, picking up sand dollars with our toes, and bodysurfing. In the evening, we took our showers outside, and slept on a screened porch serenaded by the night breeze and the lapping Gulf waves. The house has survived eight hurricanes and is still standing today.

During my teenage years, my family moved to a rambling Spanish style stucco house in Virginia’s New River Valley where my mother grew imperfect tomatoes and magnificent pink peonies full of ants—she detested pesticides. I had a room with a balcony. After I got my license, I’d often drive the country back roads and look at farmhouses that had fallen into disrepair and imagine fixing them up.

These eclectic houses fueled my young imagination and it wasn’t unusual for me to stay up into the wee hours of the morning drawing house plans. I even applied and was accepted into Virginia Tech’s architecture school. But I didn’t go. I feared the tough mathematics requirements, and Thomas Jefferson’s University of Virginia proved a more romantic pull and an ideal place to study history, drink bourbon, and explore old homes and gardens.

Flash forward to Washington, DC, an architectural smorgasbord of Fed-eral houses, Beaux Arts mansions, and Italianate town homes. It’s where I met my partner Michael, and together we renovated an early twentieth century brick row house in the Dupont Circle neighborhood. Through that DIY project, we learned a lot, including how to install a toilet while hung-over, and how to charm a surly ghost. We sold that house, moved into a pre-war apartment, and bought a modest seaside cottage in Rehoboth, where we now currently reside, surrounded by boxwoods, hydrangeas, obnoxious holly trees, and a coterie of colorful friends and neighbors. We can’t see the ocean, but we can hear it, feel it, and smell it.

So why in the hell has it taken me this long to write about houses? I can’t explain that, but I can say I’m going to make up for lost time. I hope you’ll like the result. ▼