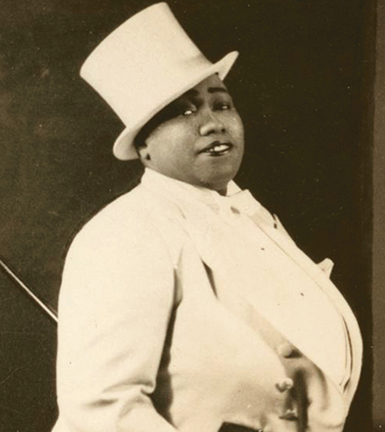 Entertainers, those masters and mistresses of artifice, are often purveyors of more truth than any historian, journalist, or society’s official record keepers. For millennia, the sharp lyric, the sad song, the profound play, the comic buffoon, have expressed the deepest truths of what it means to be alive and to be human.

Queer culture has expressed these truths with gusto. In the heyday of LGBTQ bars and clubs, our entertainers sashayed across stages large and small to sing us into laughter and tears. These days, queer entertainers are no longer confined to the fast disappearing bars and clubs. But it was not always so. Gay and lesbian entertainers, drag performers, queer writ-ers and dramatists, could ply their trade almost exclusively at our underground venues.

Once in a while, though, a queer entertainer broke through into the larger world. In the 1920s, blues singer Gladys Bentley thrilled and titillated audiences with her powerful voice, ribald lyrics, dynamic presence, and her white tie, top hat, and tails. Bentley brought lesbian drag into the big time.

Born in Philadelphia in 1907, Bentley endured brutal taunts and bullying for her gender non-conformity. By age 16, she’d had enough, and in 1923 she escaped to the one place where an African American lesbian could hope to find acceptance: New York City’s Harlem. It was the heyday of the Harlem Renaissance, when Black artists, writers, musicians, and performers were creating exciting works of music, theater, literature, and visual art. The music and literature, in particular, would go on to influence the larger American culture. Black poets Langston Hughes and Zora Neale Hurston would become part of the American literary canon. Har-lem’s music scene brought the brilliance of Duke Ellington, Billy Strayhorn, Count Basie, Fletcher Henderson, Ethel Waters, Billie Holiday, Chick Webb, and countless others into the American songbook.

The Harlem Renaissance’s cultural acceptance of more fluid definitions of lifestyle and sexuality was a natural fit for the young Gladys Bentley. The community offered her freedom, but she had something to offer in return: a glorious voice, rich in tone and expression, and a masterful command of blues music. And she had something else: style.

Her talent soon landed her singing gigs at various Harlem nightspots. As her reputation grew, and her record sales soared, Bentley became a head-liner at some of the classiest venues of the day. Billed as The Brown Bomber of Sophisticated Song, Bentley spiced her performances with ribald lyrics of sexual encounters with women and men, though in life she preferred women. According to Trudy Ring’s 2017 article in the Advocate, Bentley, decked out in her signature tuxedo and top hat, flirted with women in the audience while singing ribald lyrics. Moreover, she openly called herself a “bulldagger,” a term for a butch lesbian.

With the Depression of the 1930s, and many of Harlem’s nightspots in decline as a result of the financial collapse of the American economy, Bentley moved to California, where she appeared in the gay clubs in Los Angeles and San Francisco. LGBTQ culture was once again confined to our traditional venues.

A further blow to Bentley’s career came in the 1940s. Wartime America restricted its embrace only to traditional definitions of family: a man, a woman, maybe a couple of kids. For a self-identified bulldagger like Gladys Bentley, America’s rejection of all forms of non-conformity was a straitjacket (or, more to the point, a straightjacket).

By the 1950s, with rock-ribbed conservatism on the rise, and post-war conformity entrenched, the straitjacket tightened. But it was a straitjacket Bentley tried to endure in order to save her career, which was further imperiled by the investigations of the House Un-American Activities Committee. Bentley attracted the committee’s attention not because of her politics, but because of her open lesbianism.

In order to avoid further harassment by the committee, Bentley entered into a traditional marriage. She even tried female hormone treatments in pursuit of becoming heterosexual. Both the marriage and the hormones failed. The bulldagger proved stronger.

Though Bentley’s Christian faith intensified, it did not stop her same sex relationships. In an interview she granted to the Chicago Defenderin 1957, Bentley pointed to a photograph in her apartment of a man and woman. She identified the man as her husband, and the woman as “my wife.”

Gladys Bentley died in Los Angeles in 1960 from pneumonia resulting from flu. She was only 52 years old. Not a long life, but a full one, a brave one. A truthful one. ▼