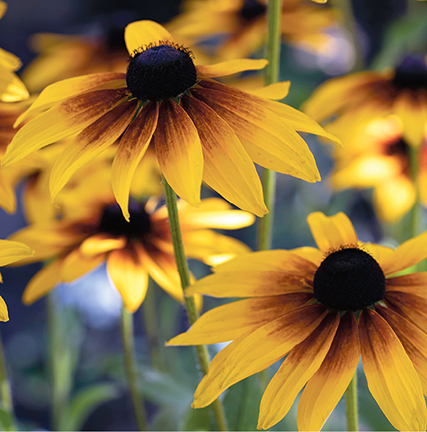 How Does Your Garden Grow?

I have two books due to editors. Over-due, actually. When we first started to quarantine, I figured this would be a great time to get them written. And yet, four months later, they remain unfin-ished or, to be honest, barely begun.

Really, the only thing I’ve accomplished is putting in a new flower garden. As that doesn’t pay the bills, it’s not the most practical thing to focus on. Yet every day I put a couple of hours in, before the heat gets oppressive and I have to give up. And every day when I’m showering off the dirt and sweat, I tell myself that I should have spent the time working on something more productive.

This isn’t entirely unplanned. We bought this house in part because of the multiple existing flowerbeds and potential for putting in more of them. This first year was supposed to be a “see what’s already growing here” one, after which we would decide what to do next year.

But shortly after the virus started to change our lives, I found myself tearing out the huge bank of juniper bushes in front of the house. Then I took down the sloppily-laid stone retaining wall along the west side of the house and began waging war against the army of wisteria and dwarf Alberta spruce trees planted there.

It felt good to do this work. Every time another recalcitrant stump finally came free from the mostly-clay soil we have here, I felt as if I’d taken a step forward. Towards what, I didn’t know. But it seemed like progress. Digging away at roots until sweat stung my eyes and I collapsed, exhausted, on the grass beside a gigantic hole helped burn off a lot of frustration about what’s going on right now.

When I finally started putting things in instead of just taking them out, I felt even better. I decided to create spaces for the local wildlife, so I focused on finding plants that pollinators love. I got a lot of echinacea and Black-Eyed Susans. I planted several hydrangeas and butterfly bushes. When, one afternoon a few days later, I went out and discovered bees happily buzzing around them, my heart lifted in a way it hadn’t in months.

I’ve since discovered that I’m not alone in this. Friends all over the world have also been planting gardens. Some are doing this for the very practical purpose of growing food, but more often it seems to be done for the sheer joy of creating bright spots of color and life in the midst of a world that feels gray and hopeless.

We can’t do very much about the coronavirus, the selfishness of our fellow citizens who refuse to take precautions for everyone’s safety, or the unforgivable stupidity of the people who should be leading instead of lying. But we can put flowers in the ground and do our best to help them grow into something beautiful.

This week, the county we live in went from having one of the lowest rates of infection in the state to being the leader in new infections and labelled the “hot spot” of COVID-19 activity. Almost overnight, months of work trying to contain the spread was wiped out, largely due to the irresponsible behavior of a small group of people.

Hearing the news, I felt defeated. So much time wasted. So many people who will now get sick, some who will die. And still the people who are largely responsible for this pandemic dragging on and on and on are the same ones screaming about not wanting to do the things we all need to do to try and get it under control.

After learning that our county had soared past Red Alert Level 3 for a public health emergency and was racing headlong towards Level 4, I went into the backyard to water the plants. Everything felt so useless—the months of isolation, the worrying about staying safe, the determination to not give in to despair. Why do any of it if other people were going to undo everything anyway? And why bother tending to a bunch of flowers?

As I was standing there, a hummingbird flew up to one of the butterfly bushes. It hovered there, inspecting the dark-purple flowers. Then I noticed that the hydrangea next to it had its first bloom, a delicate pink spray rising above the leaves. Amidst all of the bad news, here was something good, something promising, something that suggested things might get better if I just keep going.

I finished watering and went inside. Sitting down, I opened the file for one of the books I’ve been neglecting and wrote a few words. They didn’t come easily, but they came. We’ll see what they grow into. ▼