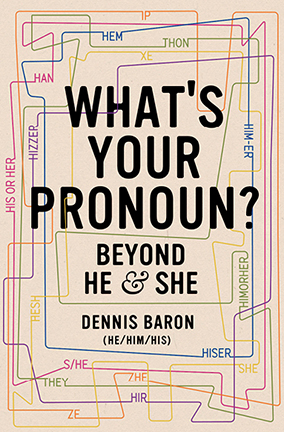 Words can never hurt you.

Even as a child, that last half of the retort to playground taunts never made sense to you. Of course, sticks and stones broke bones but even then, you knew that there’s no sharper weapon than a word said in anger or misunderstanding. In the new book What’s Your Pronoun?, by Dennis Baron, you’ll see that some of those weapons go way back.

Language is a funny thing. Words hurt, they sooth, and in today’s world, a “pronoun without sex is...sexy.” We ask ourselves, and others, which ones to use as “an invitation to declare, to honor, or to reject, not just a pronoun, but a gender identity.”

Generally, though, and until relatively recently, “he” was the default pronoun used by many to indicate both masculine and undeclared gender. As far back as 1792, neutral “he” was thought to be confusing, however; one writer even suggested that “one” might work better than “he” to indicate gender neutral.

“They” was brought up for consideration in 1794.

A century later, and with mostly men controlling law and business, “he” was firmly the pronoun of choice, and it had become politicized; when women protested that “he” clearly didn’t include them, lawmakers stated that “he” also implied “she.” Women countered that if “he” could hold office, then it was implied that “she” could, too, and, well, you can imagine the arguments—not to mention the injustice of three masculine pronouns (he, his, him) but just two for the feminine (she, her)! Oh, the scandal of it all!

Through the decades, other words have been suggested (zie, hir, thon) to indicate gender neutral or unknown but none have seemed to stick. Many felt that there simply was no good way to signify neither male or female, or a separation of gender-neutral and non-binary, and some bemoaned the lack of a “missing word” that was easily understandable. Says Baron, though, in sifting through the possibilities, we’ve had the word all along….

Sometimes, as author Dennis Baron points out in his introduction, people today offer their preferred pronoun without being asked, so ubiquitous is the question. Still, we sometimes struggle with the right word. In What’s Your Pronoun? he offers a solution—though readers may be skeptical.

First, though, it’s true that this etymological history is a good read, especially for word nerds. It’s not college-lecture level; Baron writes with a lighter hand and doesn’t preach, and the occasional threads that spring from the stories here are explored appropriately and in an inviting way that requires no drudgery. It’s like sitting down at a workshop you’ve eagerly anticipated, and being more delighted than you hoped you’d be.

And yet, there is such a thing as information overload, and the obvious solution isn’t so obvious. Proof is at the end of the book, in which we see more than two centuries of verbal wrangling.

So: em, thon, zier, they? We haven’t heard the end of it, but maybe we’re close; certainly, reading What’s Your Pronoun? couldn’t hurt. ▼