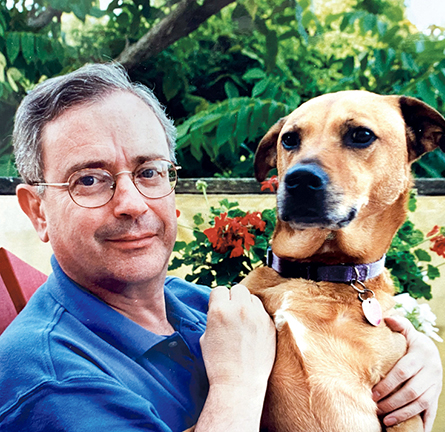 I’m not talking about politics, though I wouldn’t at all mind seeing that headline on the morning after the 2020 presidential election.

No, I’m talking about my 16-year-old Bichon Frise, Pete. Pete’s full name (combined with the year he was born) is 04 Pete’s Sake—an expression I grew up hearing from my dad. He was a passionate, loving man but often exasperated by the antics of his four equally passionate children. He had a catalog of expressions we heard on a regular basis. Oh for crying out loud! Bless Patty! What in the Sam Hill? To name a few.

The last one, by the way, provided inspiration for the name of the dog that preceded Pete.  Sam Hill was a much-loved member of our family, and Steve never tired of telling the story that inspired his name. “What in the Sam Hill did we need with a dog this big!” 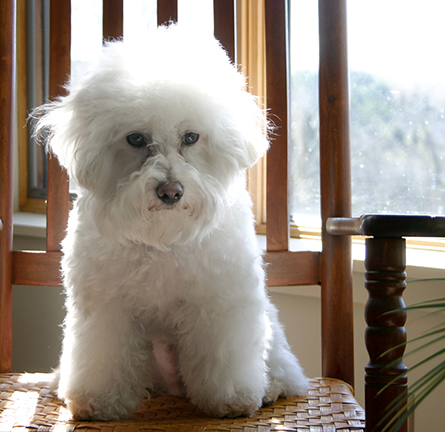 We were told when we got Pete that his name was Sailor Boy. Pete, fortunately, didn’t seem to know his name was Sailor Boy, and we changed it on his first day with us. Steve was adamant. “I will not walk up and down Baltimore Avenue saying, ‘come on Sailor Boy.’” He always told that story with a slightly naughty, come-hither tone in his voice, and most definitely, an impish sparkle in his eyes—a sure sign that he was joking, and the one enjoying his good humor most of all.

Back to Pete winning. I’m talking about number of photographs.

One of my tasks over the next year is to archive my CAMP Rehoboth photo files for the organization to have on hand for future use. As part of the process, I’m methodically revisiting all of my digital files, year by year.

More pressing even than the year-long search, I was asked to pull several hundred photos for possible selection in a CAMP Rehoboth 30th Anniversary Retrospective Photo Exhibit scheduled for the spring of this year.

And that is how I discovered that Pete wins. He is the most photographed being in all of my files—human or otherwise. Steve is right up there, as well, and though I haven’t done an actual count—and never will, I’m sure, for I have better things to do with my time—I’m confident that Pete is the clear winner.

For all of the 16 years of his life, Pete went to work with Steve and me. He was the unofficial CAMP Rehoboth office mascot. By the time Steve passed away, Pete was already an “old man” dog, and spent much of his day happily snoozing under one of the desks in the office the two of us shared.

In the months after Steve’s death, Sondra Arkin took on the role of transition manager for me, and spent countless hours reorganizing the Letters from CAMP Rehoboth production process, conducting a staff analysis, and generally saving me and the organization in ways that will, I’m guessing, never be fully understood or appreciated.

“CAMP Rehoboth is powered by Pete’s sleep,” she was fond of saying during the many long hours we spent working together in my office.

Aside from inclusion in a select number of historical photos, most of Pete’s photographs will not become a part of the CAMP Rehoboth archive. There are hundreds more that will.

As I worked my way through the first round of photo selection, I was surprised to discover how much I remembered about the time and circumstances surrounding each one.

Like many of us at a certain stage in life, I joke about “senior moments,” even though, frankly, I don’t see myself as a senior citizen. I admit, there are times when pulling out a name or a memory takes longer than others. I don’t worry about that too much. It seems normal to me.

Our minds work like our computers, I used to say to Steve—sometimes we have to dig down in our brains in order to find the folder containing the necessary information.

“A picture is worth a thousand words,” the popular saying goes. Apparently, as I’ve discovered in my photo file exploration, it is also the trigger for a thousand memories.

From the beginning of my search I’ve been aware of a voice in the back of my mind commenting on circumstances, people, events, feelings, and emotions associated with each image. Most of all, building layers of commentary to go along with each one—and creating a timeline of what was happening in other areas of our lives at the same time.

A photograph is a moment frozen in time, but the story it tells goes far beyond the actual image recorded in it.

A good photograph requires the viewer to peer beyond the edges of the image. Ordinary snapshots and personal photos connect us to family and friends, to the places we’ve traveled, and the sights and people we experienced along the way. It magnifies and shares our memory.

A great photograph speaks beyond our own personal experiences and elicits from the viewer an emotional and universal response.

I don’t claim the vast majority of photos in my files as art, though I have created some photo art along the way. Most of them are recordings of what was taking place in our lives and in the community we were building around us.

And that, my friends, is precisely why reviewing my library of photographs has moved me in unexpected ways.

As I reached photos from mid-summer in 2017, I noted, “This was the month when Steve first noticed the headaches.” And by Labor Day weekend, “This was the Sundance when Steve felt so bad. We were at the mall that year because the convention center was under construction. I put a sofa in an office in an empty store at the mall so he could take breaks and rest during the nights of the auction and dance.”

Two days after Sundance Steve was hospitalized. His lymphoma was back—in his head this time—and more aggressive than ever before. His illness and death shaped the architecture of my inner timeline for the next year, not because of the photographs I took, but because of the photos I did not take.

The story of CAMP Rehoboth recorded in my photo files is not about death—at least not any more than life is about death. Year after year, that photographic memory reveals the deep commitment and passion all of us felt for the organization and for the work we were doing in the community.

As a community, we sometimes wept together over the loss of family and friends, or struggled to deal with difficult issues or decisions, but we also celebrated life as best we could. We danced together. We laughed together. And together we built a safe and welcoming home for all of us. ▼

Murray Archibald is an artist and CAMP Rehoboth co-founder.