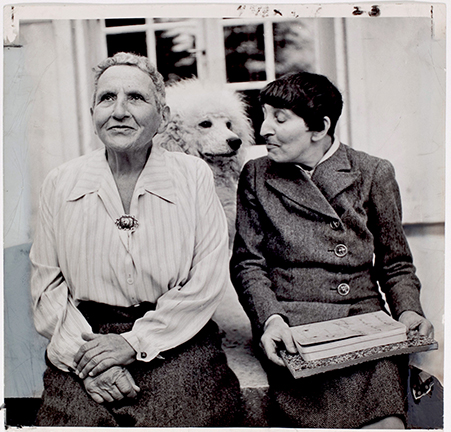 So the stereotype appears to be true: lesbians own lots of cats, or so say a zillion articles all over the place, in respected publications and populist sites. According to various sociological inquiries, cats have been an iconic feature of longstanding in lesbian culture.

Well, I’m a lesbian, and I like dogs. And I’m not alone. Some of our most beloved idols have chosen dogs over cats to grace their households. To wit: writer Vita Sackville-West; designer Elsie de Wolfe and her companion, New York theatre manager and literary agent Elisabeth Marbury; Eleanor Roosevelt; artist Frida Kahlo; Margaret Wise Brown, author of Goodnight Moon; and painter Rosa Bonheur, among others.

But the award for Canine Obsessed Lesbians must go to Gertrude Stein and Alice B. Toklas, those Lesbian Toasts of Gay and Avant Garde Paree.

Though many dog loving lesbians, like dog lovers of every persuasion, have been photographed or painted with their cherished Fidos and Fifis, Gertrude and Alice’s succession of dogs was painted, sculpted, and photographed by some of the most electrifying artists of early twentieth-century Paris. Who else could boast of having their precious poodle immortalized by none other than Pablo Picasso?

The first in the couple’s succession of dogs came into their life in 1915 while they were on vacation in Spain. The pup was a Majorcan hound they named Polybe, the French name for the ancient Greek historian Polybius. He was a big dog and evidently a handful, with a habit of eating flowers. Bouquets didn’t last long in the Stein-Toklas parlor vases.

In the 1920s, when the Paris gay and art scenes revived in glory after the First World War, Alice hankered after a white poodle—and voila!—a white standard (the big boy size) poodle became the next adored member of the Stein-Toklas household. The beloved’s name was Basket, and it was he who was immortalized by Pablo Picasso with a shadowbox sculpture he titled “Hommage à Basket.” Basket found additional artistic fame in the camera of Man Ray with a surprisingly staid and regal portrait by the usually avant garde photographer.

Big boy Basket gained a little—a very little—brother with the arrival of a Mexican Chihuahua improbably named Byron. Once again, a Stein-Toklas dog could boast of impeccable artistic pedigree: little Byron was a gift from artist Francis Picabia. Poor Byron wasn’t long for this world, though, dying of typhus while still a youth. Picabia soothed the heartbroken Gertrude and Alice by presenting them with another Chihuahua, this time named Pepe.

Basket met his demise in 1937, but another standard white poodle soon took up residence in the Stein-Toklas household. And what did they name him? Basket II. Basket II’s purebred pedigree may have saved his life—and contributed to the wartime survival of the Jewish Gertrude and Alice—during the German Occupation of France. The Nazis, obsessive about genetic purity, allowed the couple extra rations for the wellbeing of their highborn dog, entrusting Gertrude and Alice to properly feed and care for him. Thus, Basket II was able to ride out the war years, but little Pepe did not survive the harsh conditions of the Nazi Occupation. He succumbed to the winter cold and meagre rations.

Basket II, like his earlier namesake, was also immortalized in art with a portrait by Marie Laurencin. But the visual arts were not the only creative venues celebrating the Stein-Toklas kennel. Not surprisingly, Gertrude referenced her love for her pups in her writings, notably in Identity A Poem, a short theater piece, in 1936. In her inimitable Cubist style, Gertrude wrote, “I am I because my little dog knows me even if the little dog is a big one.” She further writes, “The person and the dog are there and the dog is there and the person is there and where oh where is their identity, is the identity there anywhere. I say two dogs but say a dog and a dog.” Readers have been chewing on Gertrude Stein’s sentences for a century now.

In 1946, 10 years after the performance of Identity A Poem, Gertrude died. Alice looked after Basket II until the beloved poodle crossed the Rainbow Bridge in 1952. Alice lived on until 1967.

The Stein-Toklas relationship is legendary. Their apartment in Paris hosted the unsurpassed literary and artistic lights of the time: Picasso, Hemmingway, Fitzgerald, Matisse, Laurencin, et al, everyone giving Polybe, Basket, Byron, Pepe, and Basket II a scratch behind the ears and a lick of champagne.
A dog’s life, indeed. ▼