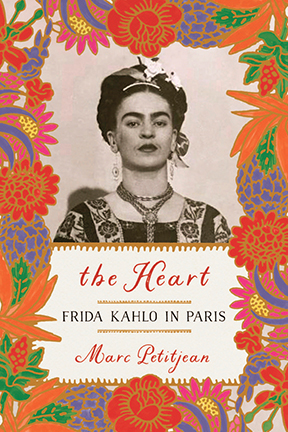 The Heart: Frida Kahlo in Paris

Every brush stroke must have had meaning.

Every color, every shading, every wipe and fingerprint and trowel mark left by the artist became a portrait of metaphor and mystery: what was the artist trying to say? Was it just a painting or, as in The Heart, by Marc Petitjean, was there a story behind it for observers to unravel?

Because his father had led a colorful life, Marc Petitjean was surrounded by artwork and objets d'art for most of his childhood. One of those works was a painting that Petitjean understood was important to his father. Later, long after the elder man died, Petitjean learned how important the painting was when a stranger inquired about his father, and the affair he had with Frida Kahlo.

Michel Petitjean was just 29 when he met Kahlo; she was 33, and was staying in France at the time, having gone there because André Breton, who'd founded the surrealist movement, had decided on his own that Kahlo was a surrealist painter. Breton told her that he wanted to do an exhibit of her work but when Kahlo arrived in France, she was angered that Breton was unprepared for both her arrival and her show.

She'd met Breton when he and his wife, Jacqueline, came to Mexico to talk with Leon Trotsky, who was living temporarily with Kahlo and her husband, Diego Rivera. The Bretons stayed the Riveras for several months—long enough for Kahlo to have a brief but playful sexual affair with Jacqueline before the Bretons returned to France.

Petitjean says that there is no way to know exactly how his father met Kahlo, but the first time they slept together "was the day Barcelona fell." They didn't speak the same language but he comforted her as best he could, and she grew to mean a lot to him. Later, he helped her pack up her paintings to return them to Mexico, and she gave him the option of choosing any painting he wanted.

He chose The Heart.

In a surprisingly charming mixture of fact and fiction, author Marc Petitjean spins a dreamy tale of an artist and a painting that is in itself a mystery. That, the multiple hypotheses, and a lingering unknown make The Heart a captivating tale.

Petitjean depicts Paris in the pre-war years in a way that lets readers feel the devil-may-care extravagance of the city's residents living in the shadow of Nazism and looming trouble, giving this book a dark sense of foreboding. He then imagines Kahlo's political leanings and adds to her mystique, giving her a certain cheeky flamboyance and, with passages that seem as if they're viewed through sheer white curtains, he shows us a Kahlo that falls easily in lust and love, but with a blithe sense of detachment.

Petitjean hints that his father was more upset about that than was Kahlo, but again—we'll never know for sure. Still, readers that love art, biographies, historical mysteries, and Kahlo in particular will find The Heart to be a stroke of enjoyment.##

Terri Schlichenmeyer has been reading since she was three years old and never goes anywhere without a book. Always Overbooked, she lives on a hill in Wisconsin and has two dogs and 15,000 books.