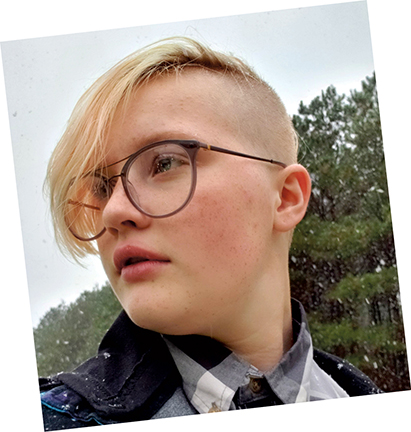 As a transgender male (Female to Male ) I struggle to feel like I am recognized as the man I am. Within my school, I am only out to few. I feel like I have the right to be out, however, I am afraid of the potential bullying. I don't think it will get physical but the blatant homophobia and transphobia I have heard make me uncomfortable to be out fully. I also struggle to feel accepted within certain communities, knowing some girls and men would not date me only because "I'm not a real man."

So far, I have gotten positive feedback and support from people that I know, making me feel happy and loved. However, I know that it will be difficult to come out to the whole school. I have heard some homophobic and transphobic comments in the halls and I have heard stories from other people of the words they heard.

This past summer I was doing a program where it was okay for me to be out. This was mainly due to the fact that the program was at an art school, but I felt included and validated. I was given the option to dorm with other men and was asked about my pronouns outright. Even so, I remember one instance where I was in class and the teacher misgendered me and did not correct the person even though I had been out since the beginning of the program.

I am currently debating on changing my name before I graduate. This is mainly so that I will have my actual name on my certificate and not my current legal name. I have been debating on doing this for a while, not wanting to have to out myself. I know that changing my name legally will definitely have my teachers question why a male name is given to someone who is "female," however, I feel like I am prepared to show them who I am. I have to be safe, but even then, I do not want to be misgendered. I have been using gender neutral nicknames for a while, finding that it helps a little. At least I know that most of the teachers I have or will possibly have are inclusive.

I sometimes think about the inclusivity of the LGBTQ community, too. I worry that some people will not accept me knowing that I am trans. Thinking ahead to the future, I also wonder how I would be seen in clubs and such. I pass only about 30 percent of the time (I know that will probably change after surgeries and testosterone), but I constantly wonder if a gay man or straight man would date me even though I'm trans.

Since I've come out, I have only really dated people who were bisexual asking questions about how they felt about trans people.

The current world is more inclusive than it used to be, however, I feel like we live in a new world with an older mindset. The mindset of most people has not changed too much. Of course, there are outliers, but I just want to be treated like any other young man.