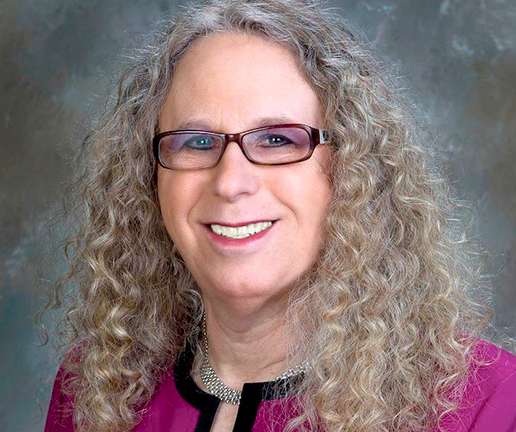 Voice of Calm Amid the Storm

This doctor grew up outside Boston, received her undergraduate degree at Harvard, followed by her medical degree from Tulane University. At Mt. Sinai Hospital in New York City, she served her residency in pediatrics and fellowship in adolescent medicine. Upon moving to Central Pennsylvania, she was hired at Penn State Hershey Medical Center, where she focused on eating disorders and pediatric medicine. Nominated in 2015 to become the Pennsylvania Surgeon General, she subsequently became Secretary of Health in 2017. She is married/divorced with two children.

This information serves as a superficial introduction to Dr. Rachel Levine, but there is so much more to her life and career than her bio suggests. I met Dr. Levine in 2011, shortly after her gender transition. I sat across the room from her at meetings of TransCentral PA, a Harrisburg, Pennsylvania support group for transgender persons. This group, its members and its mission, helped me understand and accept the transition my own daughter would soon undergo.

When Dr. Levine became Surgeon General of Pennsylvania, she attained the highest state government position that any transgender person had achieved. Now, as State Secretary of Health, she administers this role with grace and bold vision. She stands at a podium, waiting for Governor Tom Wolf to make his remarks, then steps to the microphone to give the citizens of Pennsylvania the latest update on the spread of the coronavirus.

No newcomer to life and death duties in Pennsylvania, Dr. Levine has led the battle against opioid abuse, instituting a standing order giving EMS personnel the ability to leave doses of naxolone with patients. Naxolone is a powerful overdose reversal drug.

Over the last few months, Dr. Levine has become the face of the battle against COVID-19. Her role, and the manner in which she performs it, has brought Dr. Levine both transphobic hatred and glowing accolades. She has handled both with the same professionalism that frustrates her detractors and amazes her ardent supporters.

The transphobes have come out of the woodwork, giving themselves permission to hurl online insults at Dr. Levine. One particular restaurant owner in Braddock, outside of Pittsburgh, bullied her on his Facebook page. Once criticism at him began, he merely told folks to “chill out.” Eventually he deleted all the posts and offered a half-hearted apology. His words seemed to carry no credibility.

Other people have intentionally misgendered Dr. Levine, referring to her using male pronouns. And, of course, there are those claiming to represent Christianity to speak on behalf of God. They invoke divine judgment upon Dr. Levine. These are mild sentiments that barely ruffle any feathers, but quoting the more hate-filled comments would serve no purpose here.

As Dr. Levine faces the daily onslaught of transphobia, she typically ignores it. However, at a recent press conference, she was asked a question by a radio newsperson that was as direct as one can get. “I’m from WKOK. Transphobic people have been making comments about your appearance throughout the pandemic. Do you have a message to those people?"

Dr. Levine didn't skip a beat, replying, “Well, my message is that, as Secretary of Health, I am working with the Governor's office, advising the Governor, as well as working with other agencies, to the best I can, in terms of helping Pennsylvania through this unprecedented global pandemic. I realize at times like this it's very stressful, people sometimes say things that they wouldn't otherwise say or mean. But really, what I am going to do is stay laser-focused on helping Pennsylvania through this global pandemic and assisting the Governor and the Governor's office.”

Past President of TransCentral PA, now Executive Director of Trans Advocacy Pennsylvania, Joanne Carroll has known Dr. Levine for 12 years. She writes, “In addition to being good friends, I have been privileged to work directly with her on the Governor’s LGBT Workgroup. Soon after this group began its work, a Transgender Workgroup was formed as a sub-committee. Rachel and I were designated Co-Chairs and we have worked side by side for the past several years identifying even more areas of concern for the main workgroup. My admiration and respect for her professionalism has only grown with the passage of time and our friendship has grown with it. In summation, my friend Dr Rachel Levine is a consummate professional, whose acumen and gravitas will result in saving thousands of lives in the Commonwealth of Pennsylvania.”

#Respect4Rachel has been trending on Twitter. Dr. Levine certainly has her critics, but it is her supporters who give her the courage to be the continued voice of calm at the podium during this pandemic storm.

David Garrett is a straight advocate for equality and inclusion. He is also the proud father of an adult transdaughter. Email David Garrrett at dlgarrett4rb@gmail.com