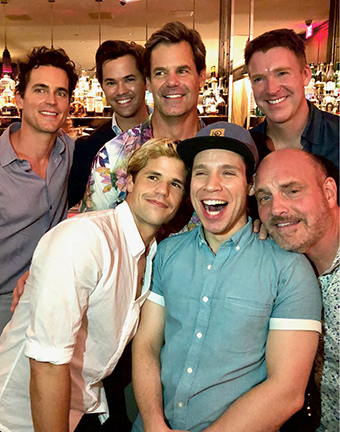 When the Lights Went Out on Broadway

He’s stage managed many big Broadway shows, was the production stage manager for the recent revival of The Boys in the Band, and was in rehearsals for another show when the theater industry went dark last March.

James (“Fitz”) Fitzsimmons, like thousands of people in the theater and its related industries, is out of work and wondering when the curtains will go up again.

He and his partner Brian, a couple for 25 years, are together in their house by the ferry terminal, ensconced in a new normal, learning what it’s like spending months at a time together. It’s been 16 years since they have been under the same roof full-time.

Fitz has an apartment New Jersey, right outside the city, for his show biz gigs, and Brian’s business career has had him working in Bermuda. Their Lewes home was a frequent site of togetherness on lots of Sunday nights through Tuesday mornings, vacations and stints between shows, but not ever for such an extended stretch. Over cocktails, in conversation with the two of them, it’s clear that it’s working out great.

But with Broadway shut down, Fitz says, “I felt unmoored. Like my identity was gone. But I’m very grateful and lucky to have been able to be here during the pandemic instead of in New York City last spring—especially since it really hit so close to home. In the final two weeks of March I lost my mother, who was in a senior facility, and three dear work friends to COVID, including the playwright Terrence McNally.”

So for Fitz, hunkering down in Lewes has been a salvation. “Even yesterday someone said to me that this pandemic feels like ‘something happening elsewhere,’ and I had to let him know how lucky he is and that I've known too many who have had it and too many who lost that fight.”

For Fitz, theatre is a passion. He says he was just about to go into tech week for a revival of Paula Vogel’s haunting play How I Learned to Drive, starring Mary Louise Parker, when everything came to a halt. Thinking the shut down would be short, the company continued rehearsals by Zoom for a while, but eventually gave that up. They plan to go back into rehearsal, possibly next March, a full year later, if it’s safe again.

Sometime last Spring, Fitz traveled from Lewes to New York, back to the rehearsal hall, to gather up some personal items people had left there. He says, “It was like time had just stopped. Walking through the city streets was eerie, nobody was around, the bars and restaurants closed.”

He went back to New York more recently, and though restaurants were open it was still very strange. “You could walk around the streets with alcohol, but you couldn’t stop and talk with people; no one was congregating.”

Meanwhile, Fitz got to tell me a lot about his experience with The Boys in the Band. There’s a film version of the show, with the powerhouse cast Fitz worked with, now available for streaming on Netflix.

Playwright Mart Crowley, who wrote the show, just passed away. Fitz calls him “an absolutely great guy” and when the show was rehearsing in 2018, he was there to work with director Joe Mantello.

“They made a lot of cuts from the original 1960s version, which Mart agreed with,” Fitz says, “and cut out the intermission, which tightens up the show.”

The original play, known for its biting and some say disturbing view of self-loathing homosexuals, has always been controversial. Fitz says that Jim Parsons, who played the lead role in the revival and on film, “does self-loathing, but somehow the viewers don’t take it on themselves.” He also credits Mantello’s laser-like direction for making the show work so well.

So, what else is Fitz doing to keep his hand in show biz? He got his certification to be a COVID compliance officer for TV and film, so as productions get back to work, he’ll have another skill. He’s also done some online teaching of an overview of theatre to high school students from all over the world—something he loves doing. And he worked on a Zoom reading of a play called Dear Liar for the Bucks County Playhouse. “It felt great to be in rehearsal again,” he says, “even on line.”

In the meantime, now that the tomatoes are preserved (“There were so many of them!”), and the pandemic continues, Fitz is channeling Martha Stewart and moving on to pickles.