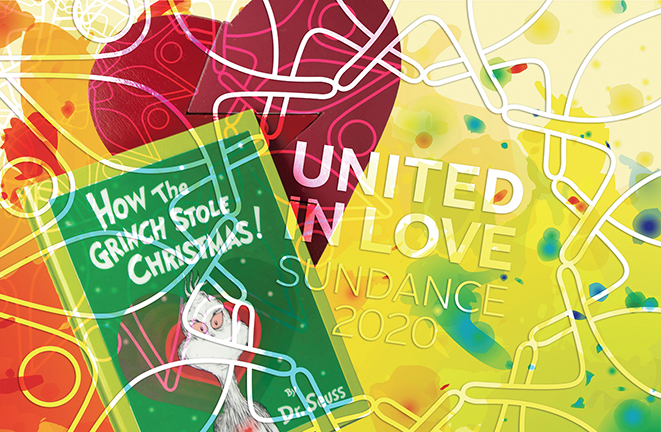 How the Pandemic Stole [or Tried to Steal] Sundance

The Dr. Seuss classic How the Grinch Stole Christmas was published in 1957. I was three.

My recollection of 1957 is understandably sketchy, and though I don’t have a clear memory of the first time Mother read the Grinch aloud to me and my sister, Mary Beth—and later my brothers, Mark and John—it quickly became a traditional part of the Archibald family Christmas.

The Archibalds love their Christmas traditions. Once established, we never look back.

When we unpacked the Christmas decorations every December, out came the Grinch. Along with The Littlest Angel, the Grinch always occupied a prominent place on the living room coffee table. Mother read it aloud every Christmas Eve while we waited to open our OCE* pajamas (so we would all look properly coordinated for Daddy’s Christmas morning photographs).

Over time the reading of the Grinch became a symbol of growing maturity, and the task passed down to each of us children, and then grandchildren, and eventually anyone we could convince to take the job.

Much like a midnight showing of the Rocky Horror Picture Show, our latter-day readings were accompanied by boisterous group responses, well placed sound effects, and occasional costumes. There was always a dog assigned to play the unfortunate Max.

There were always dogs at an Archibald family Christmas.

So he called his dog, Max. Then he took some red thread

And he tied a big horn on the top of his head.”

For those not so thoroughly indoctrinated with Grinch lore, the gist of the story is simple. The Grinch hates Christmas. Most of all he hates the singing and celebration and “NOISE! NOISE! NOISE! NOISE!” of Christmas morning in Whoville.

So, he gets an idea.

“An awful idea! THE GRINCH GOT A WONDERFUL, AWFUL IDEA!”

Dressed as Santa, he creeps into every home in Whoville and steals decorations, trees, stockings, presents, and even the food for the feast.

Back at home on Mt. Crumpit he eagerly awaits the gigantic BOO-HOO he expects to hear rising from the disappointed Whos down in Whoville.

Instead he hears singing and celebration and realizes he hasn’t stopped Christmas from coming at all.

That the Grinch’s small heart

And the minute his heart didn’t feel quite so tight,

He whizzed with his load through the bright morning light

And he brought back the toys! And the food for the feast!

The Grinch carved the roast beast!

Back in the spring of this year, as lockdown tightened around us, and event after event was cancelled, our Sundance team began exploring the idea of what a virtual Sundance could possibly look like in the time of pandemic.

For those of us who have worked for years to produce events, it felt like COVID had stolen the essence of who we were as a community. What, we asked ourselves, does a community center do when there is no community?

What do we do, we wondered, when there is no dance in Sundance?

Ultimately, our conclusion was to simply put our trust in the hands of our faithful Sponsors, Supporters, and Hosts.

We were not disappointed.

As Labor Day weekend came to a close, we were thrilled to discover that the virtual Sundance 2020 would net over $140,000 to support the work of CAMP Rehoboth.

I couldn’t help but think about the Grinch’s Christmas morning revelation. And our own.

The pandemic could not stop Sundance from coming. “It came! Somehow or other, it came just the same!”

It came in a time when we needed good news. Needed to be reminded of the generosity and goodness that exists in the world. Needed to be United in Love even if we could not be united on the dance floor.

Have we become victims of our own freedom? Are we so wrapped up in our own individual right to expression, we’ve forgotten that our strength comes from our diversity of people, and ideas, and opinions?

One of the hardest concepts Steve and I wrestled with when we created CAMP Rehoboth was the understanding that loving and welcoming the people of our community does not mean we have to agree with them—or even like them, for that matter.

In our work for full acceptance of queer people within the structure of the United Methodist Church, we grew further to understand that it is impossible to open a door part way. A door is open or closed. We cannot choose to open it for some and close it for others and still claim to be welcoming of all.

To truly be united in love with our families, our communities, our country, and our world demands that we make the difficult choice to respect people who are different from ourselves.

From the beginning of CAMP Rehoboth, we reminded our community that Rehoboth means “room for all.” Certainly, we had success along the way, but failures remain. And much work continues to be needed to completely embrace the radical welcome inherent to this philosophy. Much like Black Lives Matter, it requires each of us to reexamine our deepest beliefs and prejudices.

To truly be United in Love with people who are different from ourselves means we are willing to do the hard work it takes to grow our hearts three sizes—and like the Grinch, give it all back to the community around us.