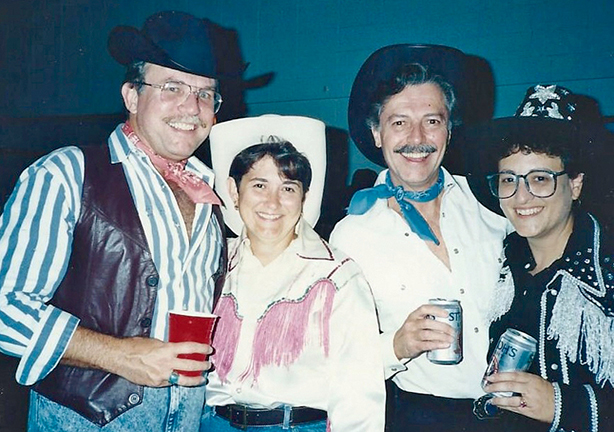 A Renaissance Man Has Left the Building

A few weeks ago, we lost community member Lee Wayne Mills. You may have known Lee as a friend or family member, or for his glorious collage works at Gallery 50, Sundance, the RB Art League, on the walls at friend’s homes, and in many more places, locally or regionally. He was a prolific artist and always up for donating his work for a good cause.

He was family to me. Like a brother. We met in 1973 at a Maryland theatre, where I was directing a musical revue. Lee’s late husband Don Gardiner was assigned to drape bright red cloth upstage on the set.

I saw Lee standing in the lobby, we exchanged introductions, and I asked him “what’s your connection to this production?” He hesitated, then said softly, “I’m associated with Don Gardiner.”

It was just four years past Stonewall and at age 25 Lee bravely outed himself as a gay man to a presumed-straight woman.

Well, at the time, I was married to a male accordion player (please judge) and while the musician played his night and weekend gigs, I began hanging out with Don and Lee, going to cast parties, shows, and as an ally to glitzy DC gay bars.

Lee was a sometime actor. He played an adorable Pawnee Bill in a 1976 production of Annie Get Your Gun, and he helped hang that same bright red material onstage for the big dance number. He sang—well—in a production of Little Mary Sunshine, played the handsome, hunky leading man in The Paisley Convertible, and brought Voodoo alive in Bell, Book and Candle.

In 1979, Lee took on his favorite acting role, playing opposite Don in a production of the groundbreaking play The Boys in the Band. They were stunning on stage together, with Lee performing from his enormous heart. And you may have heard him utter his favorite line from that show, “It’s like the pot calling the kettle beige.” He said it all the time.

By the end of the 70s I was divorced and Lee helped me figure out why (besides the accordion) I left my marriage. He had wise, witty, and often hilariously snarky words for me, and empathy that eased my struggle.

That empathy was his hallmark as he spent years tenderly taking care of his disabled brother.

When I met my spouse Bonnie, our quartet became inseparable: We shared boating on Chesapeake Bay, New York galleries, Provincetown vacations, and marching in the 1987, 1993, and 2000 Marches on Washington for gay rights. Thankfully, the bond between Don and Lee protected them from AIDS as the epidemic raged. We walked miles at AIDS Walk after AIDS Walk, with Lee’s sense of humor dragging us along, and we stayed fueled by Lee’s famous box lunches.

Lee loved costume parties. He was deadly with a hot glue gun, pasting feathers on masks or dressing as the Unsinkable Molly Brown. We watched the Oscars together, a date unbroken for over 40 years, with costumes, Don’s quizzes, and Lee’s amazing culinary gifts. And he was a food savant who could remember pretty much every gourmet meal he’d ever had, literally from soup to nuts.

Lee Wayne may have been the smartest man I’ve ever known, with a remarkable knowledge of literature, art, history, science, geography, and of course entertainment. He was always first pick for the Trivial Pursuit team. But if a sports question came up, unless it was ice-skating, there was nobody home.

Lee adored his Samoyed, Seba, and paid numerous non-profits to save whales and wolves.

Lee’s college buddy Paul was VP at the famed Forest Lawn Cemetery in L.A. When Paul gave us a tour of the fantastic sculpture and stained glass at the huge facility, he told us how, whenever a celebrity died, he would quickly ask staff, “Did we get ‘em?” For the next 20 years, when a celebrity passed away, Lee would ask “Did we get ‘em?” It might have been one of the last laughs we shared.

Others can talk about Lee’s wonderful years here in Rehoboth, and his Art League connection. But just know that in our shows there in the early 2000s, that faithful red fabric often made a guest appearance. And in 2014 it reappeared, accenting the white table cloths at Don’s memorial service.

A few years ago, as we cleaned out Lee’s house, readying it for sale, Lee and I looked at the threadbare, ratty, not-so-bright-red bolt of cloth, shook our heads, said “Bye Bye Birdie” and launched it into the dumpster.

Now I wish I had saved a bit of it to treasure. Rest in peace, Lee Wayne, we love you.