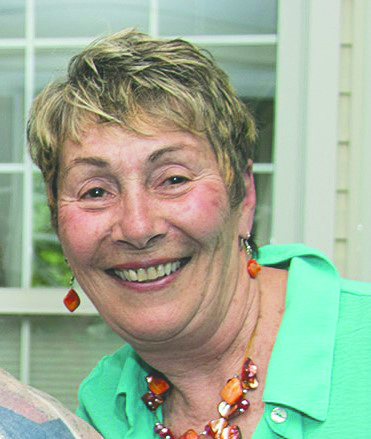 Editor’s note: Hundreds of people retire to the Rehoboth area and we know them socially, through CAMP Rehoboth or in their “second” careers. But what did they do before moving here? Hence, we are reviving Letters’ popular Before the Beach column.

Dottie is well-known as one of the Women’s FEST volunteer co-chairs, who worked tirelessly to produce the event between 2010 and 2020.

Born and raised in Philadelphia, by high school Dottie “joined every club I could, to keep from going home” because, like many of us, she was struggling to find her identity and future path. She was Student Council president, yearbook co-editor, co-captain of the field hockey and basketball teams, in the Glee Club, and more.

She had no idea what to do next, with her parents “aghast at my desire to become a ‘bride of Christ’ at the convent.” They insisted she apply to college. “My father accused me of wanting to run away, which in retrospect was probably correct, but I wasn’t in touch with the feelings fueling my urge to withdraw.”

She wound up in Buffalo, New York, graduating college with a degree in psychology and special education—and she was starting to explore her feelings “of running away.” After graduation she returned to Philadelphia to work at the state hospital. “It was a true snake pit.”

But it was there she met her first partner, a nurse. They moved to Richmond, Virginia, far from Philly, as she was still very closeted and didn’t want her family to know she was gay.

“During my internship at the Virginia Commonwealth Counseling Center, I came out and invited Rita Mae Brown, who had just published Rubyfruit Jungle, to be keynote speaker at a university event. Brown’s visit and address helped several of us establish the school’s first gay student group, which still exists to this day.”

One move and one relationship later, she was in Washington, DC, working as a substance abuse counselor. Over 30 years ago she and a colleague started a counseling group and spoke at medical schools and community organizations about “what it meant to be gay.”

Since then, she’s marched for civil rights, come out to family, and participated in many LGBTQ and human rights events.

Dottie was administrator for several inpatient units caring for AIDS and cancer patients. “Early on, I saw friends admitted to the AIDS units and die. I saw scientists struggling around the clock to come up with a treatment.  NIH was a refuge for those who had run out of options and I feel fortunate to have worked there.”

In those early years, Dottie worked and became friends with Maggie Edson who won the Pulitzer prize for her acclaimed play, WIT.

For Dottie’s last decade at NIH she directed the Clinical Center’s Patient Recruitment office, responsible for the recruitment and preliminary screening of potential research participants for about a thousand clinical trials.

During the late 80s, Dottie met her wife, Myrna, and in the 90s, friends introduced them to Rehoboth. They fell in love with the town and purchased a weekend home here 20 years ago. “We loved the look of the town, the unique cottages, the green space, the proximity of the ocean, and of course, the fact that it was so gay-friendly.”

Dottie and Myrna enjoyed Rehoboth weekends, but didn’t become involved with CAMP Rehoboth until they both retired, and moved here full-time. Joining the Women’s Weekend Committee in 2010, Dottie, along with a committee of energetic women, saw the weekend expand to become Women’s FEST, bringing in a stream of well-known speakers and continuing the tradition of hosting nationally known entertainers. Dottie was also involved early on with the CAMP Rehoboth Chorus and still sings with the group.

Over two decades Dottie watched CAMP Rehoboth founders, Steve Elkins and Murray Archibald, build the organization to become, what Dottie says, is “an integral part of the larger community, educating people about LGBTQ issues. Oh, and brings the gay community together with the most wonderful events and programs.”

Now, she says, “I don’t take acceptance for granted and think that organizations like CAMP Rehoboth are necessary to make progress and meet our needs. And I love living here!”

Fay Jacobs is the author five published books of humor and LGBTQ advocacy essays. Her new book, Big Girls Don’t Fry, will be published next winter.