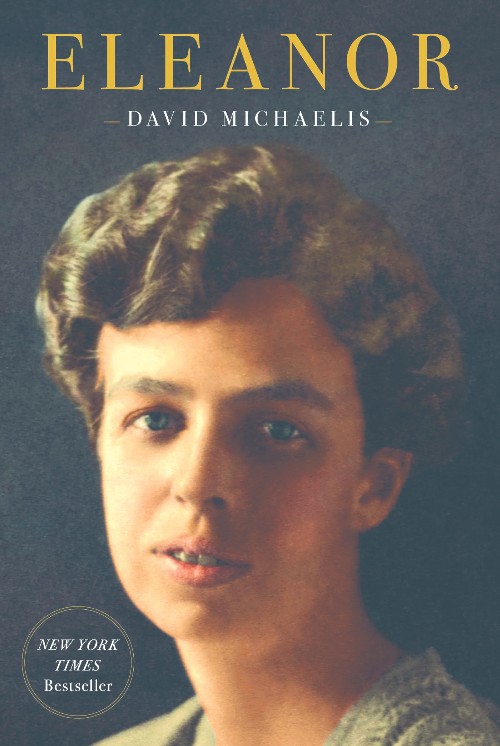 Life, as they say, is an open book.

When you're born, someone else starts writing it for you, but it doesn't take long for you to be your own author. Through the years, you'll scribble ideas, compose thoughtfully, add chapters, and crumple pages. Your life's book might be a series of quick notes, long essays, one-liners or, as in Eleanor by David Michaelis, you could build an epic story.

In today's world, we might call Eleanor Roosevelt's mother abusive: Anna Hall Roosevelt never had a kind word to say to her daughter, often mockingly calling little Eleanor "Granny." It's true that Eleanor wasn't lithe and beautiful like her mother; she was awkward and stern, a Daddy's girl for an often-absent, alcoholic father.

Orphaned by the time she was 12, Eleanor had long been told that she was homely and plain, but school chums knew her as a caring girl with a sharp mind. That intelligence later caught the eye of the dashing Franklin Roosevelt, a somewhat-distant cousin who courted her with the nose-holding approval of his mother.

It was a good match, but only for a short while: too quickly, it was apparent that Eleanor and Franklin were colossally mismatched. She needed him to need her, but he couldn't—not in the way she wanted, so she found love in the arms of another man and a woman. Her compassion for others, a rather acquired sense, helped buoy his ambition; his ambition gave her a reason to dig in and reach out to their fellow Americans in need. Despite that it invited controversy from Washington insiders, Roosevelt changed the office of the First Lady by ignoring what past First Ladies had done, once they reached the White House and beyond.

Readers who are not deep historians are in for many layers of surprise inside Eleanor, the first being Roosevelt's early life, and the racism she exhibited as a young woman. Famously, she was a champion of African Americans during the years of her husband's time as president and beyond, and she strove for equality, but author David Michaelis shows a sort of axis of attitude that the former first lady experienced.

His portrayal is balanced with compassion: Michaelis lets us see a transformation in the pages of this book and it's fascinating to watch. Rather than romanticize Roosevelt, Michaelis paints her as someone with flaws that she may not have overtly acknowledged but that she learned to work around.

This becomes abundantly clear in tales of the warmth Roosevelt craved but was denied by her husband and the relationships she enjoyed in open secret, including a passionate love she shared with reporter Lorena Hickock and a much-debated, possible affair with State Trooper Earl Miller. Such tales are told matter-of-factly and without salaciousness, though you may feel a whoop of delight at a supposedly staid Depression-era White House that really was a den of dalliance.

Don't let its heft frighten you away: Eleanor may be wide but so is its story. Indeed, you'll be carried away when you open this book.##