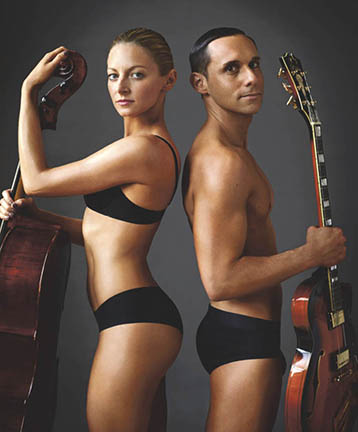 Nothing Is Off Limits

Back again after a hugely popular 2018 performance, The Skivvies will be entertaining Rehoboth Beach on Friday, September 3. New York-based Lauren Molina and Nick Cearley are singers/actors/musicians who have performed to sold out audiences, performing stripped down arrangements of eclectic covers and eccentric originals. Not only is the music stripped down—cello, ukulele, glockenspiel, melodica—but The Skivvies literally strip down to their underwear to perform. How cool is that!

People Magazine named The Skivvies “The Most Playful Performers” in the Most Talked about Bodies of 2014 issue, and Sports Illustrated named them “Favorite New Band.” The New York Times calls them “a hot musical comedy duo specializing in unexpected arrangements, incongruous mashups, and of course, highly -toned displays of skin.” The Skivvies was nominated for “Show of The Year” for the 2015 MAC Awards, with Out Magazine saying, “The Skivvies have managed to carve out a niche that we never knew needed to exist: part Weird Al-parody and part sexy burlesque…an unusual explosion of satire and sultry.”

The Skivvies have taken the stage at New York’s 54 Below, Joe’s Pub, Roseland Ballroom, The Smith Center in Las Vegas, and Philadelphia’s Kimmel Center. The Skivvies have raised the temperature in Key West, New Hope (PA), and many other places, including a special appearance in Broadway Bares. I had the pleasure of speaking with The Skivvies about dream guests, pre-show rituals, and their upcoming Rehoboth Beach show.

Robert Dominic: During the COVID lockdown, were The Skivvies able to perform?

Lauren: We performed in a bunch of different ways. Not only did we perform concerts, but also we adapted the plays The Importance of Being Earnest and It’s a Wonderful Life into live radio play formats. We also recorded our debut album: The Rocky Horror Skivvies Show.

RD: Do either of you have any pre-show rituals?

Lauren: Before a show, I like to do a vocal warm-up. I sing all different styles from belty pop to high soprano, and vocal warmups are like stretching before a workout to not pull a muscle. Depending on the show and who we have as special guests, sometimes we run guest songs right before to review and get pumped.

Nick: I shower, sing and scream in the shower, tune the instruments I play, and put on lotion.

RD: Who is at the top of your wish list to collaborate/perform with?

Lauren: In the world of musical theatre, I’d love to have Audra McDonald. Her husband Will Swenson has performed with us several times, so we’ve been trying to get her, too. I’d also be geeked to have Cynthia Erivo. I’d also be thrilled to have Bowen Yang or Maya Rudolph.

Nick: For years I’ve died to collaborate with Jake Shears. And of course, Bernadette Peters.

RD: Is there a song/cover that you perform that has a special meaning personally for either of you?

Lauren: I love our version of “Toxic.” It feels very authentic to who we are and what we do with mashing up songs into fun new arrangements.

Nick: For me, we never do it, but the first song that we did as Skivvies on YouTube that went viral and gave us the launching point was “We Found Love,” by Rihanna. We always talk about the origin of Skivvies in a show and the song that did it all, but we never do it and I would LOVE to do it again.

RD: Any songs that are “untouchable” because of how well known they are?

Lauren: Nothing is off limits.

Nick: No. We always put a fresh spin on things in my opinion so I don’t think there are any songs I would ever say no to. I’m a pretty “yes and…” person creatively speaking, so I don’t like to say anything that is off limits. Unless we try something and it’s awful. Ha-ha.

RD: What can the audience here in Rehoboth expect to see during your show?

Lauren: Expect a wide variety of music from pop, rock, to musical theatre and R&B, all infused with a sense of playfulness. There will be comedic mashups and medleys, ukulele, electric cello, and killer voices including special guests Diana Huey (The Little Mermaid) and Randy Harrison (Queer as Folk). Expect surprises.

Nick: With the guests we have and the band we have for this show, it’s absolutely fresh, new for Rehoboth, and exciting because none of us have done this show together for years because of the pandemic. For me, I appreciate the connection and banter we share having been separated (as we all have been!) for so long. I love this crew SO MUCH. ▼

Don’t wait, get your tickets now for The Skivvies at camprehoboth.com.

Robert Dominic splits his time between Brooklyn and Rehoboth Beach. He writes for publications including Instinct Magazine and his own blog, “The Gays of Our Lives.” When he is not writing he is probably at Poodle Beach.