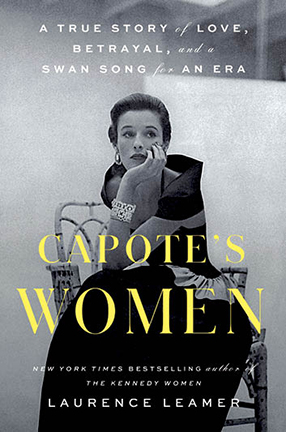 Her lips are locked tight.

Your best friend knows all your secrets, and she’s keeping them; you told her things you had to tell somebody, and she’s telling nobody. You always knew you could trust her; if you couldn’t, she wouldn’t be your BFF. But as in the new book Capote’s Women, by Laurence Leamer, what kind of a friend are you?

For months, Truman Capote had been promising a blockbuster.

Following his success with Breakfast at Tiffany’s and In Cold Blood, he was “one of the most famous authors in the world” but he needed a career-booster. The novel he was writing, he teased, would be about “his swans,” seven wealthy, fashionable women who quite personified “beauty, taste, and manners.”

His first swan was Barbara “Babe” Paley, whom he’d met on a trip with the David Selznicks to Jamaica. For Capote, “Babe was the epitome of class,” simply “perfect” in every way; it helped that the famously gay writer was no threat to Paley’s “madly jealous” husband.

Babe’s “dearest friend” was Nancy “Slim” Keith, who quickly learned that if a lady wanted her confidences kept, she didn’t tell Capote anything. She shouldn’t have trusted Babe, either: when Slim left for a European trip, Babe asked if Slim’s husband could accompany Babe’s friend, Pamela Hayward, to a play.

Slim was aware of Pamela’s predatory reputation, but what could she say?

Of course, Pamela, another of Truman’s swans, stole Slim’s man, a scandal that Capote loved.

Gloria Guinness was highly intelligent, possibly enough to be a spy in Nazi Germany. Lucy “C.Z.” Guest was an upper-crust “elitist” with a “magical aura.” Marella Agnelli “was born an Italian princess”; Lee Radziwill, of course, was Jacqueline Kennedy’s sister.

Through the late 1960s, Capote claimed to be writing his masterpiece, his tour de force based on his swans, but several deadlines passed for it. He was sure Answered Prayers “would turn him once again into the most talked-about author in America.”

Instead, when an excerpt from it was published, his swans’ feathers got very ruffled.

Every time you stand in line for groceries, the tabloids scream at you with so much drama that you either love it or hate it. Or, in the case of Capote’s Women, you cultivate it.
And that’s infinitely fun, as told by author Laurence Leamer.

Happily, though, Leamer doesn’t embellish or disrespect these women or Capote; he tells their tales in order, gently allowing readers’ heads to spin with the wild, globe-hopping goings-on but not to the point that it’s overdone. While most of this book is about these seven beautiful, wealthy, and serially married women—the Kardashians of their time, if you will—Capote is Leamer’s glue, and Truman gets his due, as well.

Readers who devour this book will be sure that the writer would’ve been very happy about that.

Capote’s Women should be like catnip to celeb-watchers of a Certain Age but even if you’re not, find it. If you’re a Hollywood fan, you’ll want to get a lock on it. ▼