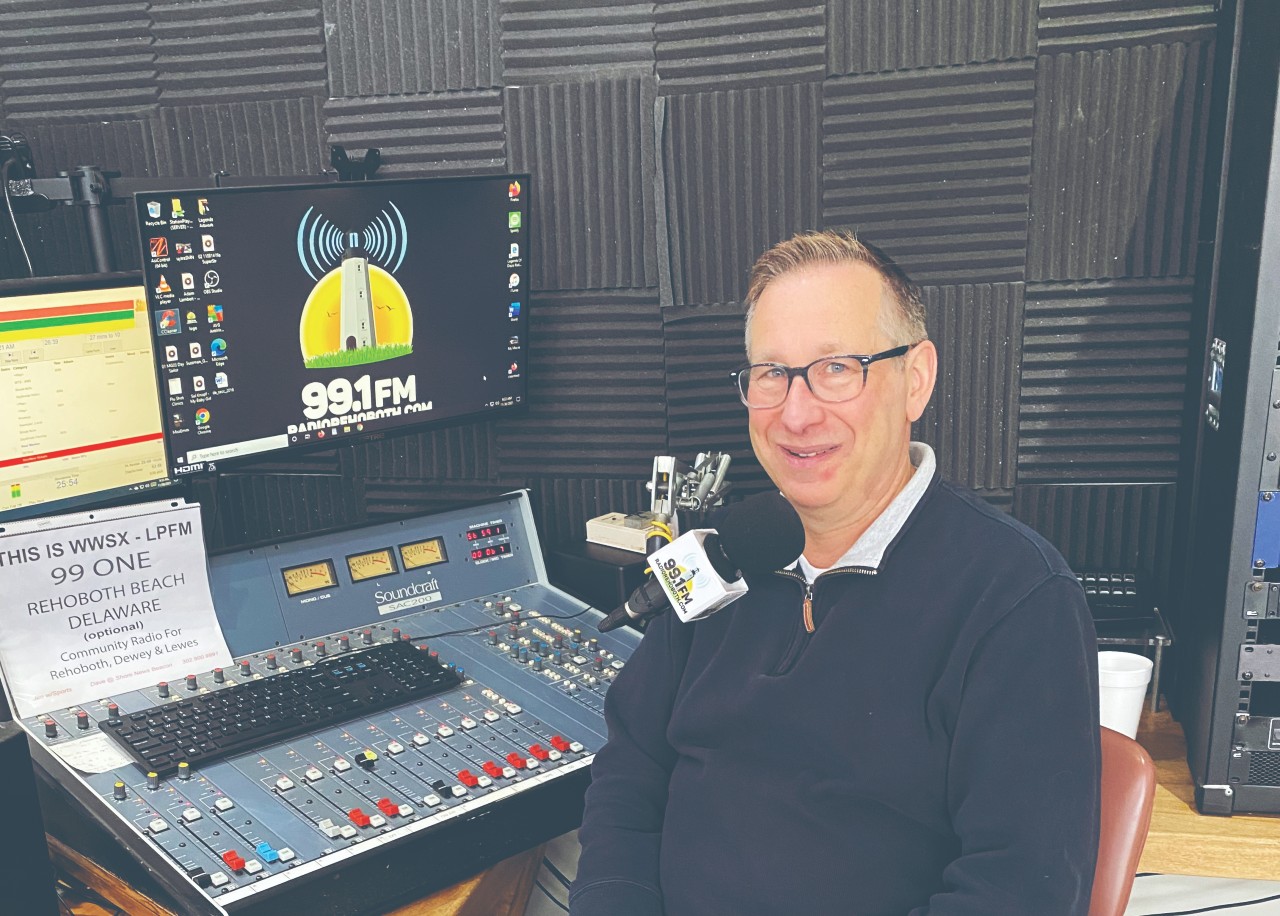 Rehoboth Beach has its own local radio station and lots of folks are tuning in. The station, at 99.1 FM, is RadioRehoboth, with a studio located downtown on 1st Street between Goolie’s Grill and Freddie’s Beach Bar.

Jeff, who’s been in Rehoboth since 2006, also happens to own the iconic Snyder’s Candy Store on Rehoboth Avenue. He comes to his RadioRehoboth post with lots of broadcast experience, a great radio voice, and a love for the medium. His radio career started in high school, continued in college, and progressed in addition to his day jobs in publishing and travel writing. He even did a short stint locally at WGMD.

“I love what I do,” Jeff says, and that’s a good thing since the station’s on-air personalities are all volunteers for this fledgling non-profit. Between leaning into the mic to report local news, then seamlessly pushing buttons to bring in a guest by phone or an intern reporting Cape Henlopen football scores, he’s right at home.

Jeff was on board at the beginning, when the station was launched in October 2017 by founder Tom Dooley. The kickoff show was hosted by Trey Kraus (owner of Carlton’s clothing store) and shortly thereafter, Jeff began his morning gig. Current program director is Keith Ingram who, Jeff says, “did an amazing job learning the software that makes the station run.”

Jeff comes in every weekday morning around 6:30 a.m. to gather his community news sources, including local weather, traffic, COVID statistics, amusing national stories, and more. He writes his script, which scrolls on his computer like a teleprompter when he goes on the air at 8:00 a.m.

Jeff discovered Rehoboth when he was an LGBTQ international travel writer, living in St. Louis and used to going to resorts all over the world. When in DC around 2001, he interviewed a lot of people who escaped to Rehoboth on weekends.

He visited here that Memorial Day weekend. “I loved all the rainbow flags, found all the merchants so welcoming, and loved the restaurants and same-sex couples holding hands in public.” He recalls venturing into the Purple Parrot, where owners Hugh and Troy told him all about the town. By the end of the three-day weekend he was hooked, vowing to move here full time if he could. He managed it by 2006 and bought Snyder’s Candy that same year.

Jeff reports that as a 100-watt station, 99.1 isn’t far-reaching, but it surely is crisp and clear in downtown Rehoboth and environs, plus being able to be enjoyed to Millville in the south, Oak Orchard to the west and Milton up north. On good days you can often pick it up in Cape May, New Jersey. The FCC is considering boosting all community radio to 250 watts, which would carry RadioRehoboth even further.

Other local names you might recognize on the station include artist and broadcaster Michael Sprouse, with his Monday night show Creative Coast, local author Bill Newcott’s movie reviews, and this reporter with a Thursday show recounting tales of Rehoboth’s LGBTQ history. If you’ve missed any of these reports, they are archived on RadioRehoboth.com.

Absolutely the only negative thing to report about RadioRehoboth might be its savings account balance. As a 501(c)(3) non-profit, receiving no money from the state, the station is always seeking donations to stay on the air. While the broadcasters are all volunteers, the station must pay for music licensing fees and syndicated programs like the weekday show Democracy Now.

You can listen locally at 99.1 FM or stream the shows live at RadioRehoboth.com. You can donate to this tax-deductible charity on the web site as well.

We hear you, RadioRehoboth. Enjoy all the music and fun this weekend and check in with Jeff Balk on Monday morning for the sound of the Nation’s Summer Capital. ▼