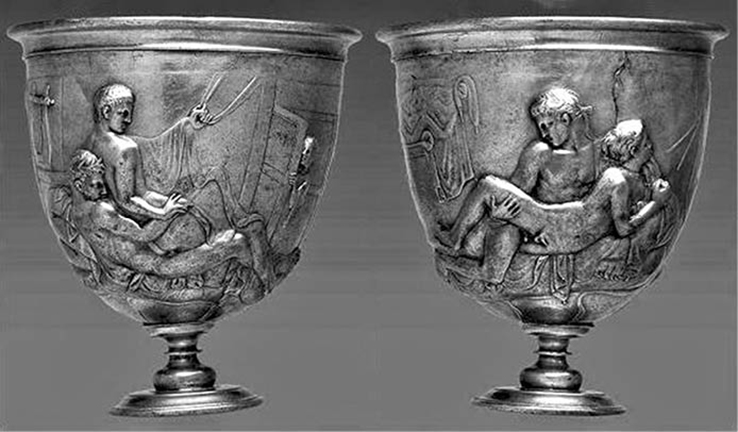 Whoa, there! The ancient Romans? Those pagan conquerors of the known world? What do they have to do with our holiday season?

Well, quite a bit. It turns out that around the time of the winter solstice, in the month corresponding to our December and the date more or less around our December 25th, those toga wearing, world conquering, idol worshipping Romans celebrated a holiday called Saturnalia.

Generally speaking, Saturnalia honored the god Saturn, who, the Romans believed, represented the bounty of a lost and ancient Golden Age, when the fruits of agriculture were spontaneous and abundant, requiring no human labor to produce. Humanity was thus free to simply enjoy being alive, free to partake of all of life’s pleasures: eating, drinking, and oh yeah, sex.

Rome’s Saturnalia festivities sought to recreate that carefree time with feasting, merrymaking, and general abandon. The merrymaking often involved role reversals, where masters served meals to slaves, men dressed as women, women as men, women bossed men around, and previously forbidden forms of pleasure, such as gambling, were permitted.

Along with feasting, gift giving was also a feature of the Saturnalia holiday. Among the aristocracy and other well-to-do Romans, the feasts were extravaganzas of multiple courses of exotic dishes. These grand banquets often went on all night. There was plenty of food, wine, and oh yeah, sex.

Which brings us to a little-known Roman emperor, Elagabalus, also known as Antoninus. The youthful Elagabalus reigned briefly from 218 to 222 CE. By the time he ascended the throne, Christianity had been around for over 200 years but was not yet the official religion of Rome and its empire; that would have to wait Emperor Constantine in the next century. Once Constantine declared Christianity mainstream, it absorbed a number of the older, prevailing customs, incorporating into Christmas the act of gift giving and a toned-down experience of feasting.

But until then, while Christianity was still an underground faith, forcing Rome’s Christians to secretly celebrate Christmas, and the empire’s Jews to discreetly light candles for Hanukkah, most Romans adhered to their pagan ways and celebrated Saturnalia. And Elagabalus really loved a good revel. Especially when it involved, yeah, sex. Especially gay sex. The photo of the first century Greco-Roman CE silver drinking cup accompanying this article (the Warren Cup, British Museum) gives us a pretty good idea of an aspect of Saturnalia’s sexual activities.

Elagabalus’s Saturnalia revels were legendary. As emperor, he had unlimited cash at his command to throw a helluva party. Dancers, musicians, jugglers, all elaborately costumed, provided entertainment. Flowers were brought in by the ton. In fact, there is anecdotal evidence that several guests at one of Elagabalus’s Saturnalia banquets suffocated under the massive quantity of violets which rained down from the ceiling.

Clearly, our holiday season is tame compared with Roman Saturnalia. But the remnants of that pagan holiday remain: gift giving, social gatherings, hearty dinners, and if not out-and-out reveling, there is the idea of good cheer.

And let’s not forget Elagabalus. Short lived though his imperial reign was (he was assassinated in 222), his life echoes down through the ages and into our LGBTQ community. He didn’t confine his cross-dressing to the days-long festivities of Saturnalia. According to statesman-historian Cassius Dio, a contemporary of the emperor, Elagabalus often wore a stola, the women’s dress of Rome. Though married multiple times—as emperors were wont to do—according to Dio and others, Elagabalus not only preferred sex with men, he referred to himself as the wife of his lover Hierocles.

Moreover, other writings of the time indicate that Elagabalus later “married” the athlete Zoticus. Among modern scholars, no less a respected authority than Eric Varner, writing for the American Academy in Rome and published by the University of Michigan Press, there is an argument to be made that Elagabalus may have actually been transgendered. There is evidence that he asked various doctors to surgically provide him with a vagina, a practice ancient medical science could not achieve.

So when you give your gifts this year, when you drink your eggnog and feast with friends and family at holiday dinners, when you party at the office and at your neighbor’s annual get-together, tip your party hat to the ancient Romans. Their Saturnalia revels reverberate through time and into our own December shenanigans.

And lift your glass to Elagabalus, who really knew how to party, and could really rock a stola. ▼