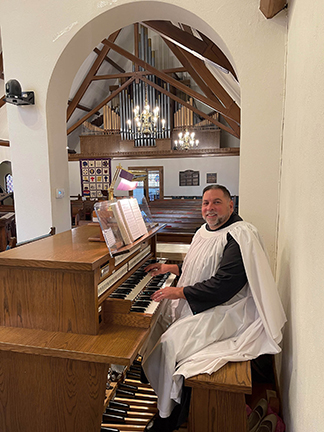 Striking a Joyful Chord at All Saints’ Episcopal

The words “Joyful, joyful, we adore thee...” are on the lips of worshipers at All Saints’ Episcopal Church, located on Olive Avenue, Rehoboth Beach. These days, though, you may be more likely to hear “Joy to the world.” In either case, joy is the recurring theme.

There is no one better suited to lead the congregation in joyful music ministry than Jon Rania. He will become the Director of Music Ministry at All Saints’ Church in February 2022. If you know Jon, you know that his life is full of joy. But it has not always been that way. For him to get to where he is today, it has been a long and winding road.

Jon describes himself as a “native son of Philadelphia.” Born into a large Italian Catholic family, and graduated from Immaculata University, he eventually found himself in the position of Director of Music for the Diocese of Camden (New Jersey). His many responsibilities there left him with a feeling of dissatisfaction. There were some pieces out of place, and he could not figure out what those pieces were, or how they needed to be rearranged.

The puzzle became much clearer when Jon claimed his sexual orientation. He chuckles as he labels himself a “late bloomer.” He admits, “Other people knew I was gay before I knew I was gay!” The Roman Catholic Church then was in the mindset that when one suspected another person was gay, they never spoke of it. Jon recalls that “people looked the other way.” This was especially true in church vocations.

Following eight years as Director of Music in the Camden Diocese, Jon reached the point of burnout. He looked for a similar position in a different venue, and relocated to Ocean City, Maryland. However, for various reasons, it did not work out. Just as Jon came to the conclusion that he was going to give up music ministry altogether, he got a call to become Assistant Director at All Saints’ Church in Rehoboth.

This was an eye-opening experience. Not having any understanding of the Episcopal Church, Jon witnessed the genuine faith of and felt accepted by Father Max and others there. “I felt very much at home,” Jon shares. This move coincided with a tremendous advance of equality in the national Episcopal Church. It had just elected its first openly gay Bishop, Gene Robinson. The winds of change were blowing through this church body, and in a positive way. This was Jon’s epiphany, being in a place within a faith community where he did not have to hide who he was, how he lived, and who he loved.

Not only is Jon Rania defined by being the incoming Director of Music at All Saints’ Church. He is also defined as a husband and father. Jon and his husband Rob have been married for 11 years, signifying an enduring and endearing relationship that spans 27 years total. It was Rob who introduced Jon to Rehoboth Beach over Memorial Day weekend, 1995. This former “Jersey Shore boy” quickly found there was room for all in Rehoboth.

Early in their time together, Rob made it clear to Jon that he wanted to have a family and raise kids. Obviously, this was a dramatic statement for a gay man to make in the mid-1990s. As Jon and Rob established permanent Delaware residency in the early 2000s, they looked into the state system for adoption. Their caseworkers were friendly, and they convinced Jon and Rob to become a test case for gay adoption in Sussex County. They went through the background checks, had endless interviews, and adoption was approved for them in 2005.

Almost two years later they received a phone call from an agency, asking them if they wanted to adopt a second child. Their response was an immediate yes, and the wheels were in motion. These wheels, however, turned much slower than in their first case. Coming through Kent County, the judge was less favorable to gay adoption than the judge in Sussex County. Once the approval finally came through, their second child found a place to call home. Now their home is filled with an abundance of joy.

Jon Rania has joyful plans as he takes the keyboard at All Saints’ Church. He wants everyone to know where it is and who it is. “We’re here and we’re sincere,” Jon states. “We really want to be a partner in the community.... All people have a seat at the table.” Now that is something that gives US joy! ▼