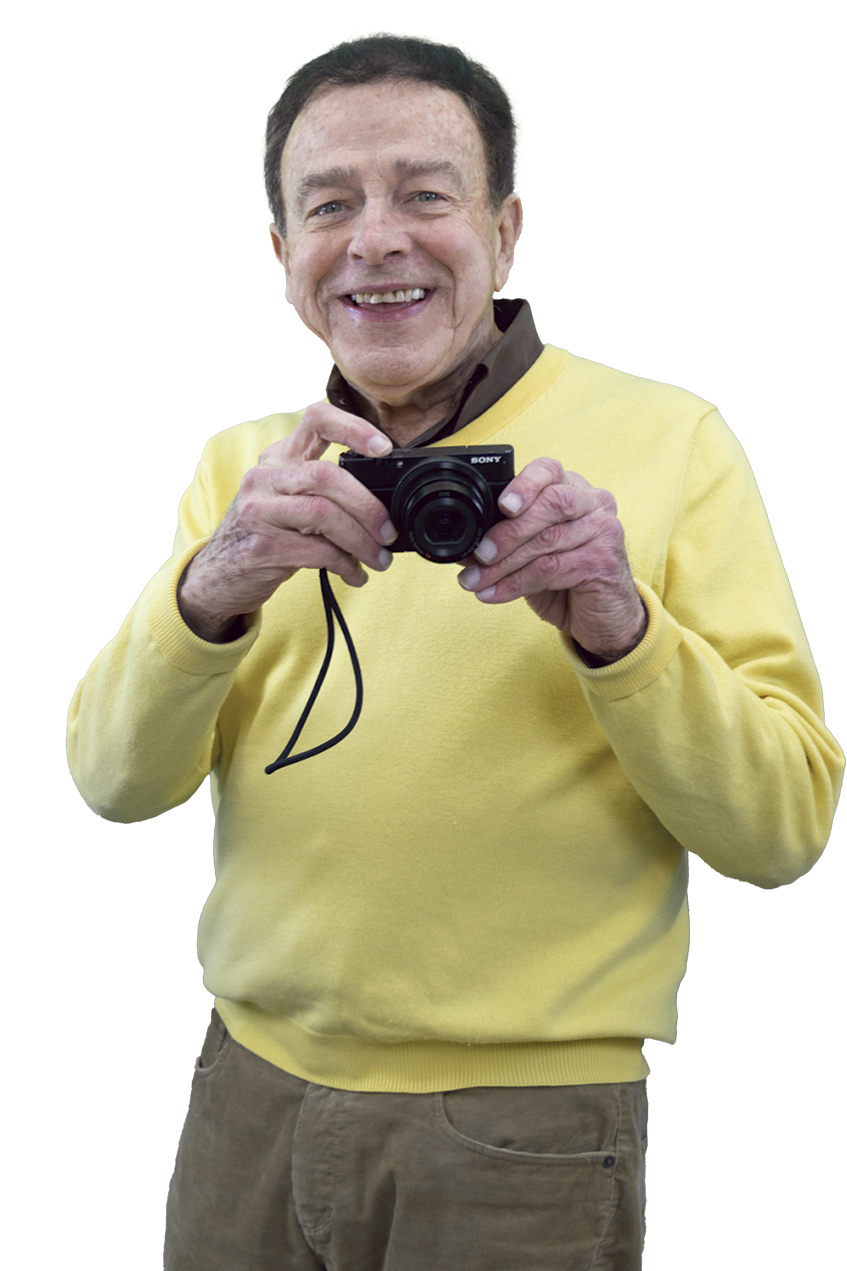 Tony Burns has been anitinerant photographer in Rehoboth Beachever since the 1970s. He began his volunteer photo work for CAMP Rehoboth at its beginning over 30 years ago and made the popular photo column CAMP Shots a must-see page (or pages) in Letters.

And now Tony’s retiring and taking with him the affection and respect of the wholecommunity for the job he did capturing CAMP Rehoboth people and events for decades.He is uncharacteristically on the other side of the lens on our Letterscover for this issue.

Many of his historic photos are in perfectly catalogued binders upstairs in thelibrary at the community center. Rehoboth regulars can close their eyes and picture Tony and his ever-present small shopping bag of photos to bestow upon the subjects when he runs into them downtown. He was even known to run into Rehoboth friends accidentally in Ft. Lauderdale and other vacation spots and say “Wait, wait! I have a photo for you!”

The majority of the thousands of the photos Tony took over the years were on film, having to be taken to a photo shop for developing and printing. He was reluctant to go digital, but when he did, not only was he just as comfortable with the new tech, but he still insisted on having the photos printed so he could give them to the people in them.

Tony may be retiring as the official volunteer paparazzi, but we bet he will still be seen at parties and on Poodle Beach taking his famous snapshots. Happy retirement, Tony. Say Cheese!

Will It Stay or Will It Go?

Now that Dolle’sboardwalk site at 1 Rehoboth Avenue has been sold to iconic Grotto Pizza, what happens to the equally (or perhaps even more iconic) Dolle’s rooftop sign? The business is moving a few doors up on Rehoboth Avenue to merge with Ibach’s Candy by the Sea, alsoowned by Dolle’s owner Tom Ibach. Will the sign move there? It’s up to owner Ibach and the City of Rehoboth Beach. This view of the sign and site in question is an original painting by Kathy Fitzgerald. 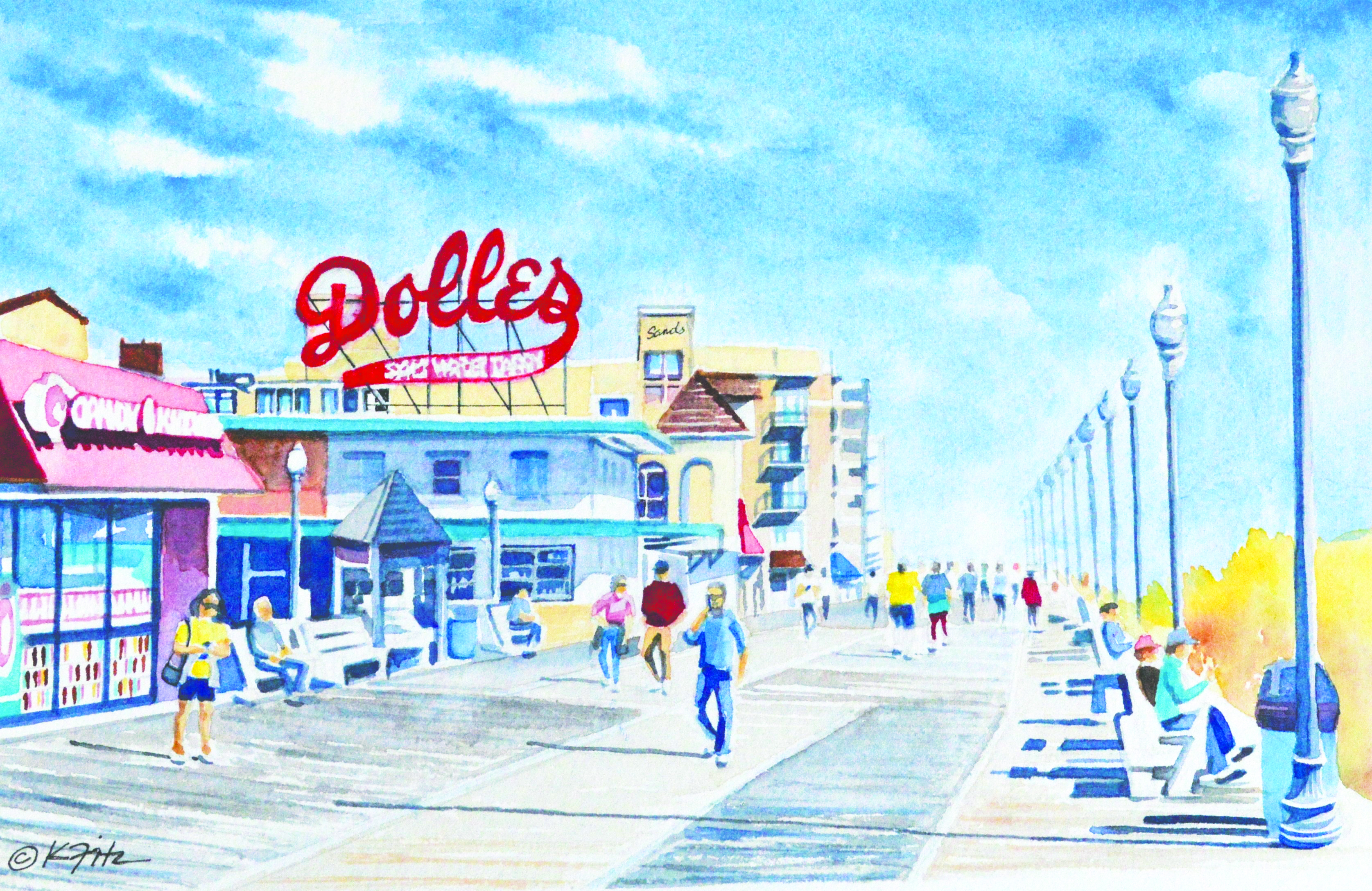 CAMP Rehoboth is now a registered non-profit on eBay. When you sell an item on eBay you can designate a percentage (or all) of the proceeds as a tax-deductible donation to CAMP Rehoboth. If you have an item of value but don't have time to list it, you can drop it off at CAMP Rehoboth and we'll list it for you! To see items currently on sale on eBay that benefit CAMP Rehoboth visit:tinyurl.com/CAMPebay.

Starting at 6:00p.m.on March 4, for only 24 hours, CAMP Rehoboth will participate in this year’s DoMore24 Statewide Giving Campaign in support of nonprofits who are doing critical work in the communities they serve.

CAMP Rehoboth is honored to have been asked to participate and we ask that you support the fun challenge and consider a one-time donation during the 24-hour period! There are both special prize drawings for those who donate and matching gift fund opportunities for CAMP Rehoboth to receive, based on the number who donate to us during those 24 hours. Check out: https://www.domore24delaware.org/fundraisers/camp-rehoboth-do-more-24-de... on March 4 and 5 to donate!

On August 2, 2021, it will be 26 years since Bill Clinton signed a1995executive order saying a person could not be denied a security clearance merely because of sexual orientation. And now, in 2021, the new Secretary of Transportation,Pete Buttigieg, is the first openly gay person to receive confirmation of his appointment by the US Senate.

The Senate vote was 86-13. After the vote, Buttigiegsaid he was "honored and humbled by today's vote in the Senate-and ready to get to work."

Losing My Mind: A Celebration of Stephen Sondheim

The Gay Men's Chorus of Washington will present Losing My Mind: A Celebration of Stephen Sondheim.The special event will be broadcast on February 19 at 7:00p.m. on the CAMP RehobothFacebook and YouTube pages. Over 20 soloists from the chorus take on song selections from themany Broadway musicals of Stephen Sondheim.Songs include: “LosingMy Mind,” “TheLadies Who Lunch,” “Marry Me a Little,” “Somewhere,” “Being Alive,” “More,” and “(Not) Getting Married Today.”

This event is free and open to the public.

On Monday, Feb. 22, at 5:30 p.m. there will be a CAMP Rehoboth Book Club presentation to discuss The Prophetsby Robert Jones, Jr. Winning raves from all the major newspapers, including the New York Times, this debut novel is about the forbidden love between two enslaved boys on a Mississippi plantation. Details at camprehoboth.com.

The second program will take place on Wednesday, February 24 at 6:30-8 p.m. The event, “Meet Me at the Intersection” will be a virtual discussion about supporting the Black LGBTQ community. Details at camprehoboth.com.