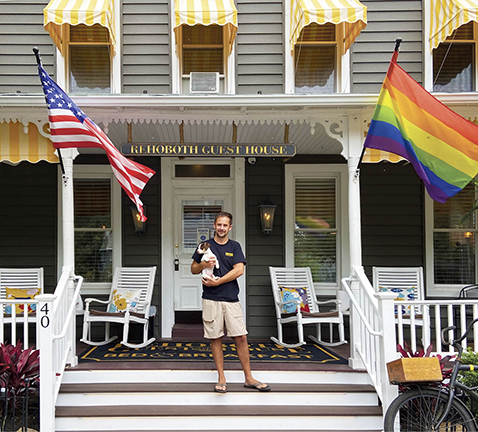 The guest house and its kissing cousin—the bed and breakfast—have long been lodging fixtures in Rehoboth. But did you know there is now only one official guest house still operating in town? And get this—it’s been a gay establishment since the late 1970s.

I had no idea until recently when I met Tom Kelch, the innkeeper and de facto historian of the Rehoboth Guest House at 40 Maryland Avenue. Tom, a trained baker before moving to Rehoboth eight years ago to manage the place, was so kind as to spend a couple of hours talking to me about the house he’s come to love. It’s an interesting story and a fitting one for this Pride edition of Letters.

The first record of the house Tom has been able to find is from 1887. It was owned by the Horsey family. “The irony here,” Tom tells me, “is that much of the land on this block of Maryland Avenue previously supported two horse liveries.” He shows me some early photos that suggest the original house was a two-story gable-roofed frame dwelling with an attic and a porch that spanned the front of the house and wrapped around one side. The porch featured (and still does) turned posts and decorative scroll-sawn brackets. It’s a unique version of a traditional Sussex County farmhouse that was built here in Rehoboth.

Following a major storm in 1914, a second house was moved away from the ocean block and physically attached to the back of the Horsey house. Ownership records are somewhat sketchy for the next 60 years, but Tom explains that at some point the property began operating as a guesthouse called The Swarthmorean. He has photos of old newspaper advertisements touting rooms by the sea. A Washington, DC school for children with disabilities purchased it as a summer vacation residence for a few years. According to a long-time Maryland Avenue resident, many neighbors gave the school a hard time because they disliked sharing the beach with the children.… 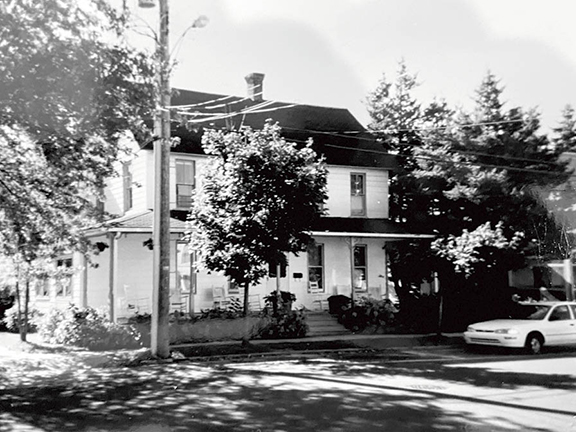 In late 1978 or early 1979, Herbert Koerber purchased it and with his partner, Abelardo Ortiz Benavides (known as Mummy), turned it into the Paradise Guest House catering exclusively to gay men. It was, Tom believes, the first openly gay business in Rehoboth. Of course, gays and lesbians had been coming to Rehoboth since the 1950s, but they stayed mostly in private homes they owned and/or rented, as I’ve written about in previous columns.

Herbert and Mummy embarked on a number of changes to create their vision of paradise. “They added a big deck on the second floor for sunbathing,” Tom explains as he leads me up the back steps. “It included a stage for impromptu drag performances and some barbells and dumbbells for nude workouts.” As if that weren’t enough, the owners turned the attic into two large orgy rooms and the basement into a sex dungeon. This I had to see, so we went into the basement. “You’d enter it through a trap door and climb down a ladder.” Unfortunately, he hasn’t been able to find photos of the dungeon, which is now just a typical basement used for storage.

Rooms at the Paradise were cheap and bareboned. Some didn’t have doors or walls, only curtain dividers. Herbert and Mummy charged extra for showers, towels, and air conditioners. There were no TVs, but there was a pay phone. “It was the most profitable item in the guest house,” Tom says with a laugh. “You also could pitch a tent in the back yard for $5.”

It is an interesting piece of Rehoboth’s gay history, that’s for sure, one that Tom is helping LGBTQ historian James T. Sears (who lives in Rehoboth now) delve into with much greater detail and with personal remembrances from guests who stayed at the Paradise. It’ll be a continuation of Sears’ research on the queering of Rehoboth (some of which has been featured here in Letters) and part of his book on the same topic which is due out next summer—a must read for sure!

In 1988, a couple named Bill and Bob bought the guest house and renamed it the Rehoboth Guest House. They cleaned it up and converted the attic into a full-sized third floor with proper rooms. They stabilized the back deck. They also began to welcome anyone, not just gay men. Current owners Frank and Garrett bought it in 2013, and undertook major structural and cosmetic renovations to bring the guest house into the 21st century, including doing away with many smaller rooms on the first floor, opening up the public living room space, and putting in a big modern kitchen.

They also hired Tom to run the guest house, which today features 18 bedrooms and 16 bathrooms. And there’s not a piece of white wicker in the entire place. I checked. It has a very contemporary West Elm look with touches of old Rehoboth like period door and window moldings, the original stairway banister, framed vintage photos, and posters and postcards of Rehoboth displayed on the walls. And, of course, the big front porch with comfortable rocking chairs. Tom says Frank and Garrett made it a point to renovate but preserve the original feel of the house.

Another surprise about the guest house is that its current clientele is 85 percent repeat guests and one-third straight. I chat up a few and hear just how personal the guest house is to them. It feels like home. And they love Tom and Cosmo, the unofficial house dog, a beagle/Chihuahua mix. One straight gentleman who visits every year explained how meeting Tom and the other guests helped him better understand his gay son and gay people in general. Others mention how the guest house and its clientele enhance their appreciation for our truly unique town. I don’t know about you, but during Pride month, it certainly makes me proud to know we’ve still got such a place in town. ▼