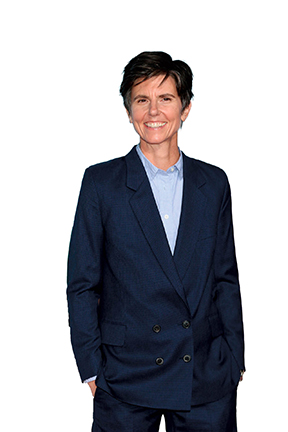 Tig Notaro Is Now a Cartoon

She wrote and starred in the sitcom One Mississippi. She’s about to be streaming in Zack Snyder’s Netflix film, Army of the Dead. She visited Star Trek: Discovery. She’s also co-directing a feature film, Am I OK?, that will star Dakota Johnson. But before all that, Tig Notaro was a stand-up comic. And now she’s aiming for history there, too, by becoming the first comedian to have a fully animated hour of stand-up. The as-yet-untitled special will air on HBO this summer, with Ellen DeGeneres serving as a producer. We can’t think of a better person to jump start this potential trend, because Notaro’s low-key demeanor seems like the perfect starting point to animate an even more deadpan version of her stage presence. As much as we plan to be finally outside this summer, we’ll make an exception for an indoor hour of Tig. ▼

They’re making Deadpool 3, which really comes as no surprise, because if Marvel knows anything, it’s how to keep you craving more Marvel. But this time out might surprise non-queer audiences. According to sources close to the project, lead Ryan Reynolds wants Deadpool’s sexuality to unfold and has apparently made explicit requests to make the anti-hero bisexual. Now, according to comic book canon, this is already approximately in the ballpark of how Deadpool’s sexuality works—as early as 2013 the wildly irreverent superhuman was described as pansexual. And we’re (potentially) thrilled that any lead Marvel character would get a chance to step outside the boundaries of strict heterosexuality when so far, all we’ve gotten is the beginnings of a same-sex relationship (in Deadpool 2) between the supporting characters Negasonic Teenage Warhead and Yukio. But we’d be even more thrilled if we knew some queer writers were on board, people who know how to make the subject come alive in an authentic way and won’t treat the subject as just another wacky Deadpool throwaway gag. Here’s hoping. ▼

Heartstopper Gives Gay Teens a Romance of Their Own

If you were a fan of Love, Victor, get ready for Heartstopper. Based on a series of YA graphic novels by Alice Oseman, the upcoming Netflix series explores high school life for two gay boys who start as friends and grow to become more. Newcomer Joe Locke has been cast alongside Kit Connor (Rocketman, His Dark Materials) as the two boys: one quiet and gentle, one more open and high-strung. Though they have a supportive community helping them accept their queerness, they still must navigate school, friends, and their own reluctance to upset a good friendship with the risks of romance. The series is currently filming in the UK throughout the summer and will involve eight 30-minute episodes that will eventually drop on Netflix. When that drop takes place is anyone’s guess, so in the meantime go get those graphic novels! ▼

With his impeccably glamorous short film The Human Voice (starring the equally impeccable Tilda Swinton) finally streaming on HBO Max, Academy Award-winning Spanish director Pedro Almodovar is teaming up with one of his longtime muses, Penelope Cruz, for his next film, Parallel Mothers. It’s another exploration of motherhood from the queer man who brought the world All About My Mother, this one about women who give birth on the same day and what happens after that. Shooting right now, headliner Cruz is joined by longtime Almodovar collaborators like Rossy de Palma and Julieta Serrano (both were in Women on the Verge of a Nervous Breakdown) as well as Israel Elejalde and transgender actor Daniela Santiago from the sensational Spanish miniseries Veneno. We’ve heard that Almodovar also has his eyes on Anya Taylor-Joy and wants to add her to the cast, but there’s no word on what she thinks of this. We’ll just live in excited anticipation until Sony Pictures Classics brings the finished product to big screens. ▼