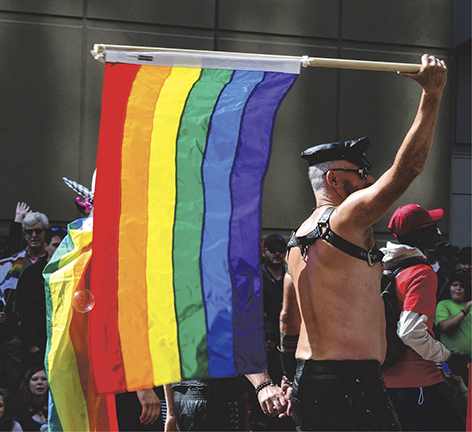 I write books for young people, which means I get a lot of mail from young people. Earlier this week, I got a message from a young man, 16, who is about to experience his first Pride. He’s very excited about it, as he should be, and he asked me what my first Pride was like.

My first Pride was 31 years ago. The summer of 1990. I had recently moved to New York City, into a studio apartment on Carmine Street in the Village, about as gay a location as you could get. I was 21, finally on my own, and finally free to be out after years spent at a Christian college where coming out meant being kicked out or, as a friend was, subjected to an exorcism.

I didn’t yet have many gay friends, so I went to that first Pride with my lesbian friend Mary and some of her friends. I remember lots of speeches about HIV/AIDS. I remember Dykes on Bikes starting off the parade and how much fun they were. I remember rainbow everything, everywhere.

I also remember thinking that for something I had been looking forward to for years, it was oddly unexciting. For most gay men, the highlight seemed to be the Sunday closing dance on the Christopher Street Pier. Mary and I had tickets for that, but after just a few songs it became clear that we weren’t really fitting in with the shirtless, buff men around us, so we left.

I went to Pride once or twice more during my years in New York, but it was never the major event for me that it seemed to be for so many. And in the years since, despite living in cities including Boston, Los Angeles, San Francisco, and Houston, I’ve never gone again. I did try to go to Pride in Toronto once, and flew there to stay with a friend and go to the celebration with him and his friends. But I ended up taking a nap instead, which earned me the enduring nickname of “The Boy Who Slept Through Pride.”

Don’t get me wrong. I think Pride is great. In theory. And every year when June rolls around again, I find myself wishing I could be more excited about it. I mean, I am, in a general way. I love that we have it. I love that most everyone else is so excited about it. I especially love when people who are about to experience their first one talk about it, and when people who have been going for years and years still find it absolutely thrilling.

But then I remember the heat. And the crowds. And the rainbows. So. Many. Rainbows.

Not being incredibly excited about Pride is not precisely a problem. Nobody cares if I go or not. But Cubby, who came out later in life, has never been to Pride and would like to go. This year the closest city to us with a Pride celebration is still holding it virtually, so it’s not an issue. And the one local event that’s happening (a happy hour at a nearby restaurant we happen to love) should be small enough and short enough that I won’t grow weary of it.

Next year is a different story. Assuming nothing new comes along to put a stop to in-person events, Pride will return in full force. Cubby will want to go. And given his love for all things colorful, he will definitely want to wear a rainbow something or other. Probably overalls. Which will look fantastic on him. And so I’ll go. And I bet I’ll have a great time, as long as it’s not too hot. I have a whole year to practice, so it should be fine.

I love picturing the young man who wrote to me going to his first Pride celebration. I can’t even imagine what it would have been like to be able to go at his age. I hope it’s everything he wants it to be, and more. I hope he finds the community he wants, and that they welcome him with open arms.

And I hope all of you reading this have the best Pride ever, whether you go out, stay home, or watch it all online. Enjoy your parades, and your cookouts, and your friends. Dance the nights away. Wear rainbow everything. And through all of it, remember that the important thing is that we let each other be who we are, whoever and whatever that is. ▼