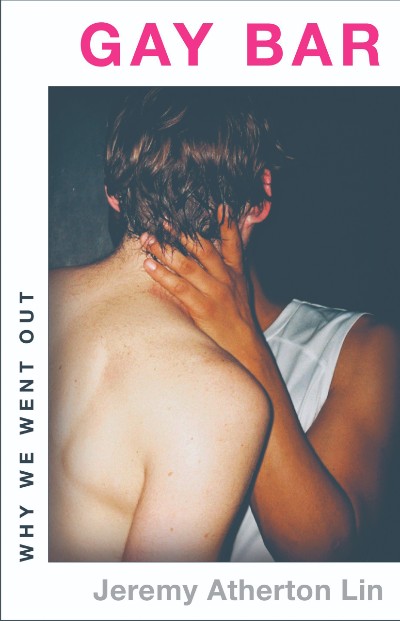 Gay Bar: Why We Went Out

The stool over by the window is all yours.

Might be because you've spent a lot of time there. It's the right height, you can easily watch the door from there, and the bartender knows your favorites, so why not? As in the new book Gay Bar by Jeremy Atherton Lin, it's one of the best places to be.

Long before it was legal for him to go there, Jeremy Atherton Lin, like most teenage boys, imagined going to the bar—though in his case, Lin imagined what it was like in a gay bar. Ironically, he says, "I can't remember my first."

As someone with a foot in each of two continents, he does have favorites, places that are now closed, re-named, or been moved. He's danced in them, had sex in them, drank and moved through gay bars with his "companion, the Famous Blue Raincoat," and anonymously, and with friends-not-friends.

Some bars were carved out of a back room or basement, or a place that used to be something else, maybe another bar. They're cavernous; or they're small and packed with men dancing or doing drugs; or they're thick with bachelorette parties and tourists, to the annoyance of the gay men who've claimed that bar. Those usurpers don't know the legacy of feeling gay, but "[I]t goes pretty deep." Some bars have opened just for the night. Others were raided once upon a time, or will close before a month has passed. Overall, they're an important part of being a gay man, pre-Stonewall, pre-AIDS, post-epidemic, and now.

And yet, says Lin, "...there does remain something embarrassing about a gay bar." Still, try to stop him from fondly remembering nights in the Castro or Los Angeles or London….

Absolutely, you could be forgiven for wondering what you got yourself into while reading the first couple dozen pages of Gay Bar. Unabashedly, without preamble, author Jeremy Atherton Lin leaps right into a hazy description of a night out or two, in a chapter that seems fragmented, like a broken strobe light. Clarity comes, but later, and it's fragile.

Part of the haze might be due to the autobiographical nature of Lin's story: there are bars in his tales, but the focus here is more going to bars, with the implied assumption that readers are familiar with those he mentions or others exactly like them. This, of course, may not be true; still, Lin's sex-and-booze-filled tales of drag, dance, and la dolce vita are compelling, woven with gay history, interesting then-and-now comparisons, and blisteringly explicit tales of being a young gay man.

And then again, while these stories take readers through the doors of a gay bar, once we've literarily entered, there are times when we're abandoned, the music's too loud, and we want to just go.

Like a song you don't particularly like, though, that won't last long. Really, the surreality of Gay Bar is not insurmountable; in fact, if you wait it out, you'll be mostly glad you did. So look for it—and take a seat.