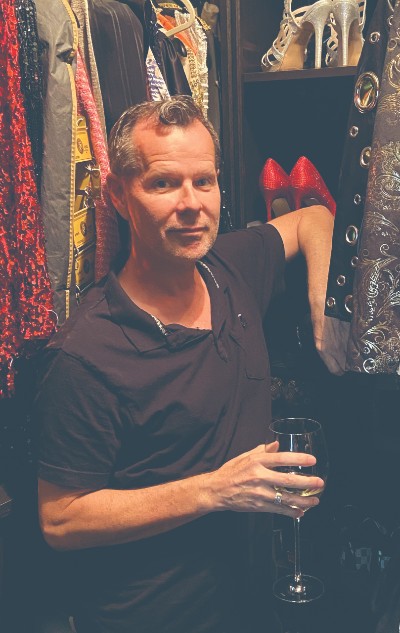 Christopher Peterson at Home (and in Rehoboth)

Renowned female impersonator Christopher Peterson will be returning to Rehoboth this summer to star in the musical Priscilla, Queen of the Desert at Clear Space Theatre. Christopher, who will play the role of Bernadette, is also designing the costumes for the production.

I caught up with Christopher recently on my winter sojourn to Key West. I wanted to hear more about his summer plans in the Nation’s Summer Capital and I was curious to see if his drag informs his design aesthetic at home.

“I’ve always had a soft spot for Rehoboth,” Christopher says as he pours us both a glass of white wine and reclines back into an enormous green velvet sofa with his little dog, Benjamin. “Those days when I was a pretty young thing working the Renegade on Route One were magical. The place had such energy. If I hadn’t fallen in love with Key West and landed a steady gig at the La-Te-Da, I’d probably have settled down in Rehoboth.”

Christopher made his full-time move to Key West 20 years ago and bought the modest prefab home he calls “The Manor on the Isle of Stock” six years ago after Hurricane Irma blasted the Florida Keys. It was a good time to make a change, he tells me, and to move from a condo to a house with more room. A lot of artists and folks in the hospitality industry have been moving out to Stock Island just north of Key West since Irma because it’s affordable. Housing in Key West, according to my research, is 143 percent higher than the national average and climbing.

“The Manor is above the flood plain and it has a generator, so I feel safe. I know the wine will remain perfectly chilled even if we lose power in the event of a hurricane. Seriously though, the main reason my late husband and I moved out here was so we could be close to work, and design and decorate the house just the way we wanted without breaking the bank.”

From my position sitting upon a fringed tuffet, I sipped my wine and looked around. The house felt both roomy and cozy with its high tray ceilings, black Italian floor tiles, and rich color pallet of green, brown, and gold, with flashes of animal print. The focal point of the open concept living area is a custom-made, pit-style green velvet sofa with black piping above which hang three large-framed black and white photos of Christopher at age 23. A nearby chest showcases several awards, more photos, and a sequined crown.

“I wanted to recreate a Las Vegas hotel suite,” Christopher explained with a dramatic wave of his hand. “Can’t you picture Marilyn curled up on the sofa and sipping a glass of wine after a show and a late-night supper?” I can, I say, looking at the man who has built quite a career bringing Marilyn Monroe and other iconic starlets to life.

I asked to see where the magic happens and Christopher escorted me into his work studio, a room stacked with wigs, hats and beaded headdresses under construction, boas, standing dress forms, bolts of fabric, and cabinets full of buttons, feathers, thread, and sequins. Naturally, there was a professional grade sewing machine. The space reeks of energy and creativity.

What catches my eye, however, are several large jewels. “I had them made in Hong Kong.” He handed me a large yellow cubic zirconia diamond. “This one is a replica of the famous Tiffany Diamond that Lady Gaga wore to the 2019 Oscars. Audrey Hepburn wore it in publicity photos for Breakfast at Tiffany’s. I’m turning it into a necklace.” He held it to his throat.

Christopher, I learn, makes most of his own jewelry for his characters and for select clients. “It’s a lot of work, but nobody else on the drag circuit is doing anything like it.” He handed me three other huge diamonds that will eventually become a choker necklace for Marilyn.

Will we see the big jewels in Rehoboth this summer? Christopher smiled, but refused to answer. He did tell me he’ll be doing a grand finale Eyecons show when he’s in town. And he’ll likely do an event with his long-time friend Freddie Lutz to celebrate the opening of Freddie’s at the Beach, the new gay bar and restaurant moving into the old Frogg Pond venue on First Street.

“Come with me darling, I’ve got another room I want to show you.” We left the workroom, made a stop in the kitchen to refill our wine glasses, and continued on into the bedroom. “This is where the real magic happens,” he says slyly. It looks like a hotel bedroom, connected to a marble and tile bathroom with double sinks and double Hollywood style vanity mirrors. We open a door and step into an enormous 10x20 walk-in closet. “Straight women—and quite a few men—orgasm when they see it. Not literally, of course, but you know what I mean.” Always the showman, Christopher posed demurely against a rack of jackets and dresses and a shelf of glamorous shoes so I can snap the perfect photo to accompany this column.

We chatted a little more and finished our wine. I thanked Christopher for sharing his home with me and the readers of Letters, and I asked him one final question. Would he say that drag influences his home and his interior design sense?

“Absolutely! Drag for me is about illusion, a little glam, and having fun. I think these sensibilities are well represented here within the walls of the Manor on the Isle of Stock. I always tell people that Marilyn, Judy, Liza, Cher, Madonna—all the ladies—paid for this house. They live here too, you know.” That I do.