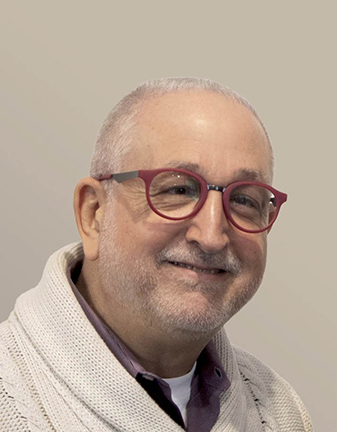 Keeping the Chorus on Course

First, he makes the bletlach. It takes eggs, milk, water, flour, salt, and a lot of butter. What he does with all of this is beyond my pay grade. He then takes anything that contains cheese or cream in the title and creates something that is really delectable. Now I am staring at Larry Rosen and the perfect blintz.

From his heavenly blintzes to his cut-with-a-fork brisket, Larry is a wonderful cook—or, as he demurs, “a good home cook.” But that’s not all he’s good at. As anyone will tell you, Larry and his housemate Barry Bugg (or BLarry, as they are singularly called) do a fantastic job managing the production side of the CAMP Rehoboth Chorus. And part of the reason for the success of the chorus is the bang-up job Larry and Barry do for them, performance after performance.

So how did Larry get to this place, Rehoboth, and the chorus? It all started in Waltham, Massachusetts, where his dad served in the Army. After several moves (all of us military “brats” can identify with that), Larry ended up in Rockville, Maryland. That raised some eyebrows from this interviewer, as I also ended up in Rockville at the same time. It gets spookier, as Larry also attended the same elementary school as my wife and was at the University of Maryland at the same time as me AND my wife. And now, Delaware. I suppose it’s all coincidence, but I keep looking over my shoulder to check and see if he’s following me.

After living in Rockville for several years, Larry’s parents moved. In a Home Alone moment, Larry stayed. He spent two years at Miami University of Ohio before graduating from the University of Maryland in elementary education in 1979. Soon after, he found the only full-time job he’s ever had.

In 1979, Giant Food was in the process of converting their registers to scanning technology. Seeing an opportunity, Larry read all the technical manuals, and became a PC specialist (did I mention he’s very smart?). He would remain with Giant for 17 years. When faced with a downsizing move in 1996, Larry retired on disability after suffering from chronic fatigue syndrome and arthritis, which still hinder him today.

That’s how Larry made a living. But his after-hours activities during this time would change his life forever.

Larry always knew he was gay (the boy crushes in elementary school were a good clue). Larry chuckles and says, “in college, I did fall in love with a boy and a girl at the same time. It was a…very confusing time!”

In the 1980s, Larry performed stage manager duties, talent searches, even master of ceremony gigs for LGBTQ organizations in DC. In 1993, he joined the Gay Men’s Chorus of Washington as a member of the stage crew. His myriad tech experiences there would prepare him for his Rehoboth future.

It was while working with the Gay Men’s Chorus of Washington that Larry met his friend and future housemate, Barry Bugg (and BLarry was born). Together they worked long hours for the chorus, performing both administrative and technical duties.

When it came time to retire, Barry asked Larry if he wanted to go with him to Rehoboth. Larry had lost his long-time partner to AIDS in 2011 and had stopped working with the chorus in 2014. So in 2015, Larry said yes, packed up his vintage tie collection and crepe pan, and drove off toward the morning sun.

That journey led to the CAMP Rehoboth Chorus and a partnership with Director Doug Yetter. Larry and Barry would become the production team behind the chorus so Doug wouldn’t have to sweat the not-so-small stuff.

Interestingly, Larry had another connection to Rehoboth. When he was much younger, he bought his first gay book at Browseabout Books. He says he doesn’t remember which was better—the joy of reading books about people like him for the first time, or the adrenaline rush he felt smuggling the book past his parents.

What makes Larry happy these days? Family, a long walk along Gordon’s Pond, and cooking up a storm for his grateful friends. Larry says that he is glad to be in Rehoboth, glad to be alive, and glad to be my favorite cook. Interview over. Make me a blintz. ▼