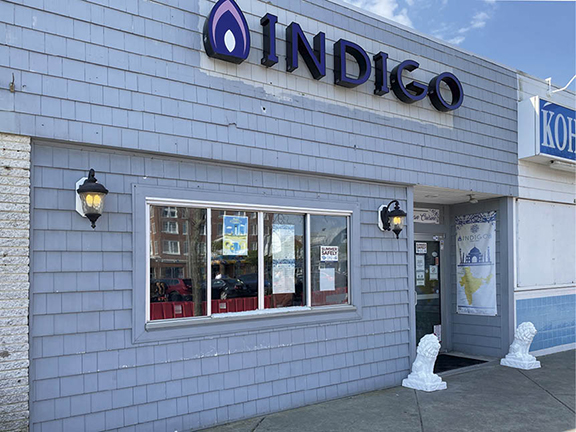 Rehoboth Beach cuisine has come a long way, baby, since it was all pizza, fried seafood, and saltwater taffy.

In addition to some mighty fine pizza, seafood, and candy stores harkening to the past, there’s been an explosion of delicious ethnic foods at area restaurants. These would be at home in urban foodie hubs as well as here at the beach.

Recently, I visited Indigo, in Indian restaurant on the ocean block of Rehoboth Avenue, for a delightful dining experience and an introduction to some marvelous dishes.

The restaurant is a spacious spot with booths along a long storefront, and tables in the back as well. With its COVID restrictions and procedures, it feels very safe indeed.
From the jeweled sconces on the walls and the wood panel décor, to the soft Indian music, the space says, “we’re not near the boardwalk anymore, Toto.” And the white-aproned staff provides friendly, welcoming, and really excellent service.

Indigo offers bar service of beer and wine, so we started off with two ice-cold Stella’s and an appetizer of Shrimp Pakora—crispy fried shrimp marinated in sour cream and herbs. It’s a street snack in many parts of India and proved a terrific starter for us.

From there, we studied the menu, which offered many chicken, lamb, and seafood dishes, a very large selection of vegetarian and vegan entrees, and India’s traditional tandoor oven cooking.

The tandoor oven is generally a cylindrical clay pot or even metal pot, heated by a charcoal or wood fire, burning within the tandoor itself at a very high temperature. Contemporary tandoors can be heated electrically as well.

For our meal we enjoyed the Lamb Rogan Josh—lamb cooked in onion sauce, with yogurt, almonds, cream, and spices. It was deliciously spicy but not so hot as to be uncomfortable. The accompanying garlic naan was great with it, along with basmati rice and chickpeas (served with most entrees).

Our second selection was the signature Chicken Tikka Masala—chicken pieces broiled in the tandoor, then cooked in garlic, tomatoes, onion, and spices. It was also a wonderful combination with basmati rice and beer.

From the exotic Indian specialty entrees to the tandoor kebabs there is something for every taste at Indigo. I’m anxious to return to sample some of the fish dishes as well as the other breads, leavened and unleavened, that they offer. There are also soups, including the Chicken Shorba—traditional Indian soup with chicken, lemon and coconut—and the Dal Shorba.

Some of the intriguing entrees offered include Gosht Vindaloo—lamb pieces and potatoes cooked in curry and Shrimp Biryani—an East Indian rice dish cooked with shrimp. Biryani is served throughout India as well as Iraq, Iran, and Afghanistan.

A cooling dessert is perfect after all the flavors and spices making up an Indigo dinner. We had the Kheer—a cardamom-flavored rice pudding, chilled and sweet. They also have Gaijar Halwa (carrot pudding), Gulab Jaman (a light pastry), and ice cream—both Kulfi, an Indian treat made from thickened milk with almonds and pistachios, and traditional Rehoboth Beach chocolate and vanilla.

As for the beverages at Indigo, diners are happy to find Dogfish Head beer as well as several others, bottled or draught. There are also chai teas, a yogurt drink called Lassi (sweet or salty), or Indian tea.

Since we cannot travel for a while, try a trip to Indigo at 44 Rehoboth Avenue. Or order a carry-out. It’s an exciting part of Delaware’s contemporary culinary coast. ▼

Fay Jacobs is the author five published books of humor and LGBTQ advocacy essays. Her new book, Big Girls Don’t Fry, will be published next winter.