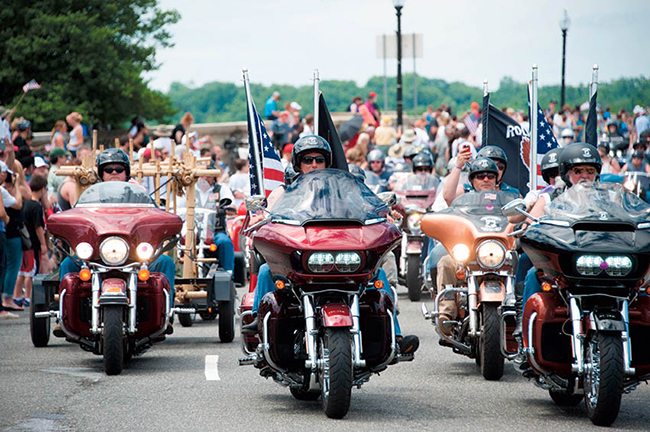 For me, Memorial Day is all about the motorcycles.

Given I live in a coastal resort community, this may seem like heresy. Here, the weekend is all about kick-off to The Season. The one where the people flocking to our beaches outnumber the gulls doing the same, where the scent of sunscreen and French fries overwhelms that of saltwater, and where local businesses welcome the uptick in customers. It’s all about throwing out that big sandy welcome mat, holding our collective breaths for sun and warm temps, and preparing for the influx.

This year—after last year’s necessarily muted season—there’s a special sense of anticipation in the air. This Season, despite continuing COVID-19 restrictions, holds more promise than did last year’s—and a great deal of pent-up demand for some sun-and-fun.

Of course, for the epidemiologist part of me (conservatively estimated at 80 percent), all that sun-and-fun also makes it the season-of-cautionary-tales. As others’ thoughts race to the beach or the water or the parties, mine run just as fast toward sunscreen or water safety or safe sex. More about those in upcoming columns. Because this is the Memorial Day issue of Letters and for me, Memorial Day is all about the motorcycles.

But it’s not only about the motorcycles. It’s also about the missing man (or fallen comrade) ceremony, which I once was privileged to attend. This deeply symbolic ritual is a memorial tribute to fallen, missing, or imprisoned service members.

The centerpiece of the ceremony is a small table, which serves as a focal point of remembrance. It’s set close to the entrance of a military dining room, or VFW or American Legion hall, or even at some restaurants. It may turn up there on Memorial Day, Veterans Day, or POW/MIA Recognition Day (the third Friday in September).

The table, and each element on it, has special significance:
★ The table is round, representing the everlasting concern the survivors have for the missing and fallen.
★ It may be set for one, symbolizing the isolation of the absent service member. Or it may be set for six, with a place for each of the five armed services (Army, Navy, Air Force, Marine Corps, and Coast Guard), and a sixth for the civilians who died during armed conflict.
★ A white tablecloth symbolizes the pure intentions of the service members who responded to their country’s call.
★ A single red rose in a vase represents the blood service members have shed in service to the US; it also may represent the family and friends who await the return of missing service members.
★ A red ribbon tied around the vase represents the love of country that inspired the fallen and missing to serve.
★ A slice of lemon on the bread plate represents the bitter fate of the missing.
★ Salt sprinkled on the bread plate symbolizes the tears shed by family and friends.
★ An inverted glass represents the inability of the missing and fallen to partake.
★ A lit candle symbolizes a light of hope and/or the spirit of the fallen or missing.
★ One or more empty chairs represent the absence of the missing and fallen.

The elements of the ceremony, which originated in US citizens’ concerns over the POWs and MIAs of the Vietnam War, are traditional v. prescribed, and have evolved over time. For example, a bible (representing spiritual strength and faith) is often included but is not used in non-Christian or secular settings.

The missing man ceremony is one of the most poignant I’ve ever attended; even this one-time Vietnam War protestor was moved to tears.

But it’s another tradition arising out of the Vietnam War that means Memorial Day to me. It’s those motorcycles….

I lived in the Washington, DC metro area for over 25 years; for the last 10 of those, I lived in a suburb north of the city. Each weekday afternoon I commuted home along route I-270. Typically, I was fully engaged just negotiating my five northbound lanes of traffic; I gave little thought to the five southbound lanes. But even I could not miss the many motorcycles turning up in those southbound lanes by late May, their numbers increasing daily. By the Thursday before Memorial Day, hundreds of motorcycles were cresting a small rise in the lanes to my left and streaming south.

Those motorcycles, intent on their mission, were arriving for Rolling Thunder’s Ride for Freedom, held annually in Washington, DC (1987 through 2019) on the Sunday before Memorial Day. The ride started at the Pentagon parking lot and ended at the Vietnam Veterans Memorial.

Each year, the motorcycles signaled the bittersweet arrival of Memorial Day weekend for me as their engines’ thrumming reverberated in my chest, breaking my heart—once again—over the terrible sacrifices they represented. For me, Memorial Day will always be all about the motorcycles. ▼

Marj Shannon is an epidemiologist and wordsmith who has devoted her life to minutiae. She reports that yes, the devils are in the details.