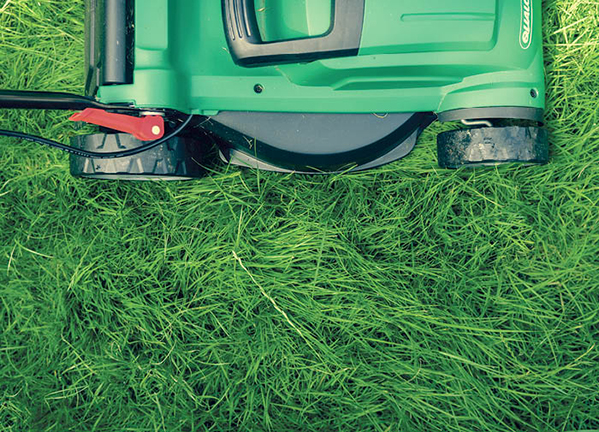 When we did the final walkthrough before closing on our house, the previous owner said something that at the time seemed perfectly harmless. “People around here like to mow their lawns,” she remarked as we stood looking at the front yard. “It’s kind of a thing.”

A few months later, I would realize that it was a warning.

We purchased our house in January, when snow was covering the ground and mowing the grass was the least of my concerns. We didn’t even own a lawnmower and I figured I wouldn’t have to worry about it until maybe May. But the snow disappeared in March. Then, seemingly overnight, the grass leapt up as if it realized it was late for work and had to make up for lost time.

Fortunately for me, our neighbor runs a landscaping business. He offered to cut the grass for us. “First one is free,” he joked, like a sketchy older kid on the playground offering me a joint. And it almost worked. Until he told me that based on how quickly our lawn grows it would need cutting twice a week. I did the math, figured out that I could buy seven lawnmowers for the same cost, and decided I needed the exercise anyway.

At first, I also doubted his claim that our property would need so much attention. But sure enough, just a couple of days after being cut, the grass was just as high as before. Smallest Dog, looking for a place to pee, declared the situation intolerable. And so off to Lowe’s I went in search of a mower.

The first time I mowed, it was actually kind of fun. At least at first. The weather was cool, it was nice to be outside, and taking care of our house felt very grown up. But then I almost ran over a baby rabbit. It was huddled in the grass, minding its own business. Fortunately, I noticed movement in time and disaster was averted. Still, it made me tense. By the time I was done, almost three hours later, the novelty had definitely worn off.

It only got worse. Every time I mowed, there was something new to watch out for. Snakes, for instance, which apparently like to lie in the grass just waiting to be run over. Bees, which stubbornly refuse to get off the dandelions you’re about to mow down. Having to shoo the critters out of the way doubled the amount of time it took to get the mowing done. Feeling like Godzilla destroying Tokyo every time I saw a moth or grasshopper fleeing from my advancing mower was emotionally exhausting. It was like I’d become the Destroyer of Worlds, bringing death and destruction to my backyard universe.

As if the guilt wasn’t enough, I soon realized that I was also involved in a competition. My neighbors, it turned out, had a long-established rivalry when it came to yard maintenance. Every day in warm weather, the sound of lawnmowers and weed whackers filled the air. When I went outside, I saw people on all sides of our property tending to their own lawns.

On the surface, it seemed like a friendly enough event. Everyone waved to one another as we pushed mowers from one end of our yards to the other, as if participating in some elaborate group dance number. But one day the neighbor whose property abuts ours, a lovely woman in her eighties, casually mentioned that, “Your grass is getting pretty high.”

I looked at our shared lawn. Her side was neat enough to play croquet on (which she in fact does). Our side looked like we were late on harvesting the hay crop. “We’re leaving it long for the pollinators,” I said, trying to sound convincing.

Eventually I settled into an uneasy truce with the lawn. I divided it into five sections, and each one gets attended to once a week. It’s an imperfect system, and it means our property always looks like a patchwork of grass at different heights. It also means I mow some part of the yard pretty much every day from the end of March through the beginning of December. But it mostly works.

As for the neighbors, last week while picking up dinner at our village’s lone restaurant, one of the owners introduced me to the new employee. “His grandmother is your next-door neighbor,” she said. The guy looked at me. “So, you’re the one whose grass is always too long,” he said.

When I got home, I put the bags of food on the counter and headed for the garage.

Photo by Daniel Watson on Unsplash