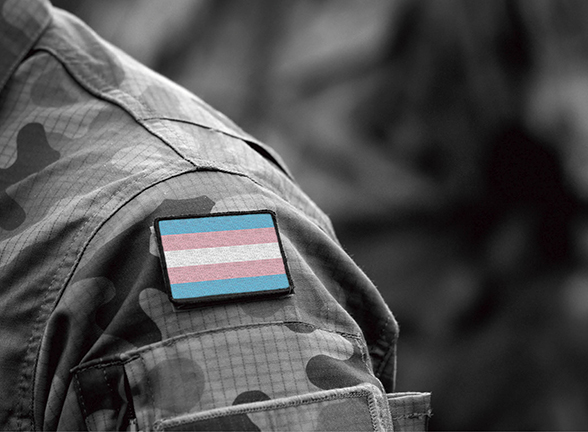 A Tale of Two Machinists

It’s an expression you sometimes hear in the Air Force. Like any big institution, there are always processes and hoops to jump through. These days, Airman First Class Thomas is waiting to be sent out to the Joint-Base San Antonio Gender Health Clinic. while Allegra, a transgender man, will head to the clinic to pursue gender-affirming surgery.

A bit of a wait is probably to be expected. After all, the ban on transgender service members put in place by the Trump administration was only lifted in January 2021. Allegra is one of many trans service members who came out after that. The clinic never stopped assisting transgender clients, even during the ban, but Allegra, like others, was hesitant: “I didn’t know what it really meant for me if I went there.”

The ban was lifted on January 25, and Allegra came out to his coworkers on the following day. “I’m a worrier, so I was so nervous,” Allegra said.

“At some point I remember somebody offering me a bottle of water, and I remember my hand shaking as I reached for it. I’m definitely somebody who worries a lot. But I really received nothing but love and support. It definitely felt like being received by my family.”

Allegra works as a machinist at Dover Air Force Base and is one of an estimated 15,000 transgender individuals who are currently serving in the military. Of course, transgender service members have always been in the military, but their experiences have not necessarily been like Allegra’s.

Like Allegra, Amanda White also served in the Air Force here in Delaware. Amanda is a transgender woman who you may know as an organizer of Delaware Pride. Amanda and Allegra have a lot in common right down to their job descriptions. Amanda also worked as a machinist for 13 years, ending her career as a machinist’s mate. Their experiences in the military, however, are quite different.

Amanda enlisted in 1989, three years before “Don’t Ask, Don’t Tell” began. At the time, she didn’t know of any LGBTQ people in the military at all. “There were rumors, of course,” she said.

Amanda was not out (even to herself) yet. “I struggled to fit in, and to be like ‘the guys,’ but back then the possibility of living my life as a transgender woman was not even on my radar yet,” she said. “It was not a great experience for me,” she continued, “I would not discourage anyone from joining the military. For a lot of people, it’s a very good decision—especially if college is not for you—because it can train you in a trade.”

Allegra added that everyone’s experience is different and he is thankful for where he is. He is particularly grateful for his therapist, provided by the Air Force, who is helping him through this journey.

His advice? “I’m not saying it’s going to be all sunshine and rainbows, but honestly, I would say as long as you feel safe and you have a little bit of faith in the people around you, come on out. I personally was so caught up in trying to imagine people’s reactions, that I didn’t give them the chance to react. People can’t show you they love you unless you let them.”

I asked Amanda if she is surprised by Allegra’s experience, and specifically the Joint-Base San Antonio Gender Health Clinic.

Amanda paused and said, “It’s not surprising to me that something like this is coming. But it is a bit surprising that they already have it.” ▼