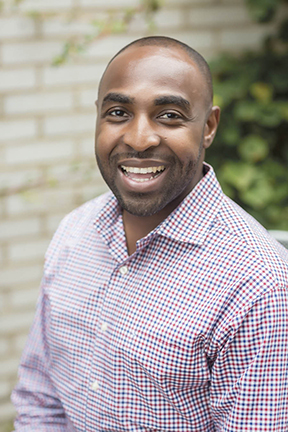 One of my favorite pastimes as a teenager was snooping through my sibling’s room. It was a new adventure each time. I never knew what I’d discover. The summer before my senior year of high school, while thumbing through my sister’s bookcase, I came across a book that would significantly change my life and how I perceived myself and the world around me.

There was a book on the shelf that I’d never seen, written by an author I’d never heard of. The book was Invisible Life by E. Lynn Harris. I picked it up and randomly selected a page to skim. I couldn’t put the book down. Black gay and bisexual characters living ordinary lives, with careers, families, and romantic pursuits. I’d never read anything like it. In fact, I didn’t even know that literature like that existed. Written by a Black gay man. To me it was extraordinary.

I read as much as I could that day and placed it back on the shelf before she arrived back home. For the next two days, whenever I was home alone, I’d return to her room to read more until I’d finished the book. Then I combed her shelves for more. There was another E. Lynn Harris novel and two books written by James Earl Hardy, B-Boy Blues and 2nd Time Around. It was the ‘90s and ample access to stories and visuals about the lives of Black LGBTQ+ people were not common—particularly those shaped by us and not through the narrow lenses of others.

In college, with a new world opening to me through the internet, I was able to become familiar with an even broader range of voices, like Essex Hemphill. In addition to the voices through written words, I was drawn to the visuals of the groundbreaking films of Marlon Riggs. Seeing Tongues Untied and Black Is…Black Ain’t are two of the most influential experiences of my development.

Those explorations of Black gay and same gender loving identity were authentic, thought-provoking, nuanced, diverse, and freeing. Defining yourself for yourself was radical then and now. The journeys of those men gave me permission and offered a light to guide a path for my own journey to freedom and self-expression—just as I am. I give thanks and honor the elders and ancestors who came before me. I also smile widely seeing how their spirit lives on and moves through modern creators.

In December 2018, the internet personality Lil Nas X released the country rap song “Old Town Road.” The song eventually went viral and became one of the biggest hits of 2019. A young Black man was taking the world by storm with a song that mixed music from what most would consider very opposite ends of musical, social, and political spectrums.

“Old Town Road” garnered him awards from BET, MTV, Billboard, Apple Music, Teen Choice, American Music Awards, and the Grammys. His fan base and Twitter following grew by the millions. He catapulted to international fame. In 2019, on the last day of Pride Month, he used the very social media platform that jumpstarted his musical career to invite the world in and share that he was gay.

Since then, as an artist and high-profile social media influencer, he’s been freely expressing himself, sparking conversations around gender, sexuality, race, and the everyday experiences of people of his generation. He shares his whole self with the world and we’re fortunate, at all age levels, to have him help broaden the lens through which we see Black LGBTQ+ people and create social, cultural, and political reference points for those who’ll follow.

This spring he released his much-anticipated new single “MONTERO (Call Me by Your Name),” with an accompanying video that explored identity, queer themes, and the duality of masculinity and femininity. All art is subjective; some people praised the song and video, while others were particularly disturbed by the music video which uses religious symbolism and includes a moment when Lil Nas X gives the devil a lap dance.

His artistic expression and public exploration of his sexuality, fighting stigma and shame and owning his body and presence as a Black gay man reminded me of the work of the elders and ancestors. On the largest platforms ever created, he was doing what others had done before him and others will continue to do, boldly. A bit of Essex, a bit of Marlon, a bit of Sylvester, and all of his own powerful and playful style, Lil Nas X is perhaps his ancestors’ wildest dream. ▼

Clarence J. Fluker is a public affairs and social impact strategist. Since 2008, he’s also been a contributing writer for Swerv, a lifestyle periodical celebrating African American LGBTQ+ culture and community. Follow him on Twitter: @CJFluker or Instagram: Mr_CJFluker.