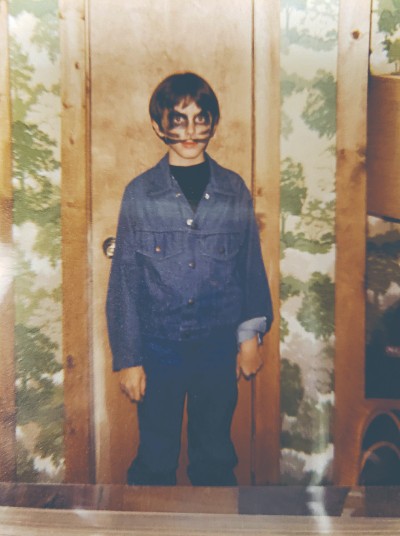 I Wanna Trick or Treat All Nite

A few weeks before she died, my sister sent me several photographs. “Look what I found in one of mom’s albums,” she said.

The photos were all taken in 1978, the year that my family moved from a city in Virginia to the small country town in New York where my father had grown up. I was 10, and although part of me was excited about the new adventure, I was also sad to be leaving behind my best friend, Stephanie, who lived across the street from us.

One of the cornerstones of my friendship with Stephanie was a mutual love of the band KISS. We were exactly the right age to find their music both scandalous and thrilling. My mother forbade me to play them in our house, but fortunately Stephanie’s parents had no such qualms and she had all of their albums. We spent a lot of time in her bedroom, listening to songs like “Calling Dr. Love” and “Love Gun” and discussing which band member was our favorite. Stephanie liked Paul Stanley best. I liked Ace Frehley.

When the first Halloween in my new town arrived, I expected that, as in years past, my mother and I would head to the drugstore and look through the stacks of boxed Collegeville and Ben Cooper costumes with plastic masks and cheap smocks to find exactly the right one. (I’d been Sylvester the Cat the previous year.) I’d forgotten that we no longer lived in a city, and that there was no drugstore. Also, there was really nowhere to trick-or-treat. The country road we lived on had only a half-dozen houses on it, most of them belonging to my uncles and their families.

My mother assured me that we would go trick-or-treating in a nearby town. But that still left the problem of a costume. My mother was not exactly handy in that department, and I rejected her suggestion of a bedsheet ghost. Perhaps because it was easier than trying to come up with something better, she finally agreed to let me go as one of the members of KISS.

The band had recently released their ill-fated quartet of solo albums, and on a rare shopping trip without my mother to the closest city, my father had purchased for me the Ace Frehley and Peter Criss LPs, which I was obsessed with. Because I could find no silver makeup with which to replicate Ace’s look, I decided to go as Peter Criss. My costume consisted of a black t-shirt and a too-large jean jacket I had inherited from my older cousin, Jay.

I remember the night being very cold and that I scored a surprising amount of candy. In fact, it’s one of the few Halloweens I remember with any clarity at all. I also recalled there being a photograph of me in my costume. But I could never find it, and once Alzheimer’s took all of my mother’s memories away, I assumed I never would. I even began to wonder if I had made it all up.

But there in the group of photographs my sister sent me was one slightly blurry shot of me standing in the living room of our old house, dressed as Peter Criss. It had been tucked into an album and stuck in a box, discovered when my sister decided it was time to clean up her basement.

My memory of that Halloween has always been a mostly happy one. I recall being thrilled that I finally got to dress up as a member of my favorite band (even if he wasn’t my favorite member). I remember having fun trick-or-treating. But it was also a very stressful time in my life. A new school, where already I had gotten tagged as queer. No friends, and the one friend I desperately wanted to be trick-or-treating with living in another state, seven hours away.

It’s strange to look at that photo and the boy in it. Halloween is all about becoming someone or something else for the night, and that Halloween night in 1978 I probably wanted to be anyone other than who I was. And so I became a rock star, the Catman who pounded out the beat to some of my favorite songs while the Demon, the Starchild, and the Space Ace stormed around the stage. The next morning, I would have to wake up and go back to my new, difficult reality. But for a few hours I could pretend I was untouchable.

Last Halloween, our first in our new village, Cubby and I sat on the porch while the small number of trick-or-treaters came by and took candy from the bowl on the steps. It was a small moment of joy in what had been for all of us a very tough year. When one little boy, dressed in some unidentifiable homemade costume, asked, “How many pieces can I take?” I thought about how I’d felt on that Halloween night 42 years ago and said, “As many as you want.” ▼