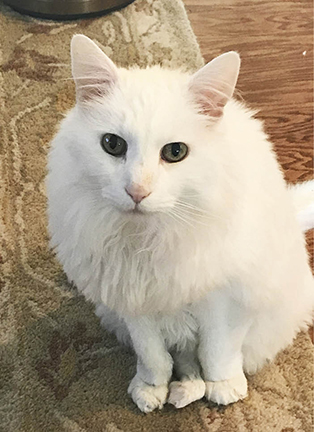 My Geoffrey. That’s my cat. Who names their cat Geoffrey? Long story short: My 27-year-old daughter was nine when we found Geoffrey. We let her name the cat. Enough said.

How can I tell that Geoffrey is old? Well, he sleeps all day, for one. He demands his food at the same time each day. He limps all over the house whenever he finally gets off his chair. Oh wait, that’s me.

In truth, my baby may have feline dementia. According to Dr. Karen Louis from VetChick.com, cats, like people, can become senile as they age. Here are some signs my cat may have dementia instead of just being old:
• He is disorientated, or seems lost. He walks into a room, then leaves right away to go somewhere else. Yep, that’s Geoffrey.
• He vocalizes. MEOW has become a part of the vocabulary of our house.
• He sleeps a lot during the day. Of course, he sleeps all night, too. C’mon, he’s 76. What do you expect?
• He urinates or lets loose the other thing outside the litter box. Now I’m thinking he’s had dementia since he was two.

Wow. I feel really bad. I make fun of Geoffrey whenever I can. What’s worse, I have all the symptoms above, except that I hit the human litter box almost all the time. Any day now, we’ll be sitting next to each other on the couch wondering who the thing is beside us.

Dementia beside the point, Geoffrey is a fascinating cat. He was born without most ligaments in his hind legs. If that had happened to me, I would have spent my life flopping around like a Raggedy Ann doll. But Geoffrey copes. We are very careful not to discuss his disability in front of him, but he probably has noticed he’s not like other cats. And what’s more, he doesn’t care. He navigates stairs better than I do. It takes me half an hour to walk down our stairs. Because of his physical limitations, he can’t jump (again, neither can I), but he’s learned to stand up on his hind legs to beg for food or some unconditional love, which he gets.

What’s more, he does his chores around the house. Geoffrey is a Turkish Angora,  which means he’s got long and poofy hair. A few carefully placed kitty treats, and he’s off and running, dragging his posterior behind him. Which means what? He’s a living vacuum cleaner!

See, I make fun of Geoff a lot. But the truth is, he’s a sweet cat who just wants to be loved. When you’ve owned a cat for 18 years, you discover that he gives you as many gifts as you give him, or more. Sure, he can be a pain in the tuchus, especially when his “gifts” are found underneath the dining room table when company is there. But what’s a little poo when he loves you so much?

I have often suspected Geoffrey is thick as a brick, or at least I unfairly tell him so all the time. But what if he’s not a doofus, but has feline dementia? I prefer the former; I fear the latter. What can I do for this long-time friend?

Dr. Louis suggests that the first thing to do is get a thorough assessment of his neurologic status. Once he is diagnosed, medications and supplements may be in order. Talk to your vet!
Keep food and water bowls easy to reach. Have the litter box on the floor of the house the cat spend his time in. We have laid down stair treads on the hardwood steps of our foyer so Geoff can reach his favorite resting place, the front door.

Just as their human counterparts require mental stimulation, so do cats. Keep his mind sharp. Have him do sudoku. I’m kidding. Heck, I can’t even do that.

But seriously, look at your cat’s face and imagine him with a smile. A kitty cat smile, even an imagined one, makes you realize what you get out of having your cat, and give it back tenfold.
Meanwhile, Geoffrey is pooping away under the dining room table. Excuse me. I have to go love my cat. ▼