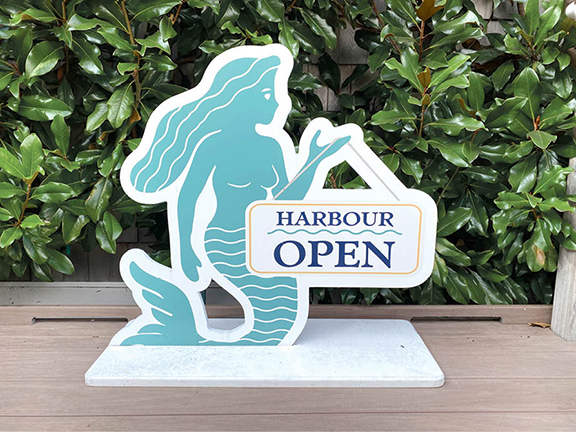 Delicious Dining on the Waterfront

As you approach the entrance to Harbour at 134 W Market Street in Lewes, you will be greeted by a mermaid who floats in an elegant sea of flowers and escorts you to a magical place of yummy goodness. I swear, it’s true!

Well, at least it was true for us…. My wife, Diane, and I had the pleasure of dining at Harbour Restaurant at Canal Square recently on the eve of their one-year anniversary. After we passed the gorgeous mermaid, we entered a welcoming foyer and got our first peek at the view of the Lewes Harbor. When you see that view, let yourself exhale and be in the moment.
As we were escorted to our table, we saw several groups of acquaintances dining inside and out on the large deck. We also saw popular local bartender Rob Bagley. He’s the Beverage Manager at Harbour, a Level One Sommelier and an expert mixologist. He introduced us to Tavish, the owners’ son, who was also behind the bar.

Harbour is owned by Lorraine and Gary Papp, formerly of Palate Bistro & Catering and the Essential Chef Catering. Lorraine runs the front of house and Gary is in the kitchen with a team of chefs including Tim McNitt, Tom Wiswell, and Eric Fitzgerald. Gary and Lorraine don’t do catering any longer, but they have created a wide menu at Harbour. Our fun server, Kim, told us that the New York Strip is probably the most popular entrée.

I started with a drink created by Tavish called the Ginger Rabbit, containing Tanqueray Sevilla gin, carrot shrub, and Fever Tree ginger beer. It turned my lips orange, and I loved it. Diane ordered the Japonica, with Roku Japanese gin and Fever Tree Refreshingly Light Cucumber Tonic. The cocktail menu contains original twists on classics with lots of high-end mixers and freshly squeezed juices. Most impressive on the cocktail menu was the substantial list of Zero Proof choices including cosmos, gimlets, punches, tiki drinks, and more. There also is an extensive wine list.

To start, we ordered appetizers from the “specials” list: I got the gazpacho and Diane got the heirloom tomato & peach salad. 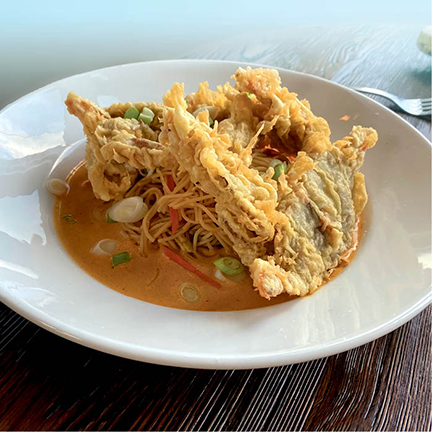 The gazpacho was unique. Normally one thinks of gazpacho as a raw soup which can sometimes taste like salsa in a bowl. Harbour’s version is a Spanish style that is cooked and then cooled resulting in a thick soup, yet bright and fresh with crunchy corn and onion. My favorite part was the Cilantro Crema on top which is fresh cilantro and lime mixed into sour cream.
The salad was an explosion of flavors with heirloom tomatoes and baby arugula as the base, topped with peaches, hand-pulled burrata, bits of basil and mint, and topped with a mustard and pepper vinaigrette. The pistachios on top were great.

For her entree, Diane ordered Jumbo Maryland Soft Shell Tempura. It was a mountain of tempura crab on a pile of delicious sesame noodles in a Thai red coconut curry sauce that was not spicy but did have a bit of sneaky heat. The tempura batter was a nice light alternative to a traditional deep-fried softshell crab.

For my entrée, I ordered the Pan-Seared Halibut. It was beautiful and delicious. The fish itself was really simple (which I love) and cooked all the way through without being even one second overcooked. (How do they do that?!) It was served on top of lentils cooked in a green Thai curry sauce with wilted spinach, serrano chiles, and a cantaloupe lime salsa—which sounds like an aggressive pairing, but it didn’t overwhelm the fish. As I ate the fish, I could get as little or as much of the accompaniment as I wanted. It was lovely.

The appetizers and entrees were generous portion sizes—but save room for dessert. The dessert menu is carefully curated by Lorraine. She brings in Hopkins Dairy Farm Ice Cream and Smith Island Cake, but the rest of the items she makes in house. She has won awards for her desserts. You must try the famous Coconut Cake with Lemon. On this night, they were also offering tiramisu, flourless chocolate ganache, crème brûlée, and more.

Have I convinced you yet? I hope so. And when you visit, try this joke out on the mermaid: What did the sea say to the mermaid? Nothing. It just waved. ▼