Pictured here is Becky, who may well be my last dog. She is just six, so I’m hoping to enjoy her for several years yet. But beyond that, well…. I’ve been walking dogs, and making vet and groomer visits, and holding every-evening training/playtime sessions with them for decades. Maybe I’ll be ready for a change.

But I won’t be ready to be dog-less. I love having an animal companion. As I also love technology, it occurred to me that maybe I’d like a robotic dog. Studies demonstrate the benefits of pets (both real and robotic), e.g., reduced stress, better mood, and less loneliness. Many models are readily available and, though pricey, the lifetime cost of the real thing is pricey too.

I thought first about Aibo, Sony’s robotic dog that entered the consumer market in 1999. I was intrigued when I read about it in the early-aughts, but in 2006 it was discontinued. However—it reappeared in 2018, new-and-improved. Once very robotic in appearance, Aibo now vaguely resembles a terrier and comes in colors much more alluring than its original metallic silver, e.g., white, caramel, and tri-color.

There are other robotic pets—chiefly dogs and cats—available from other manufacturers as well. The range of capability is broad, from cats that may “purr” or move a bit in response to petting or grooming (some have cat-like fur v. plush) to dogs, like Aibo, which come knowing how to play fetch and obey basic commands. Aibo can explore its environment independently (it’s full of cameras and sensors) and learn new commands.

Not all robotic dogs are destined for the consumer market. About 500 of Boston Dynamics’ “Spot” robots—which are useful in hazardous situations, such as exploring downed power lines or searching debris—are doing work for utility companies and police departments.

There are military robotic dogs as well; earlier this year, “Quad-legged Unmanned Ground Vehicles” (Q-UGVs), designed by Ghost Robotics and Immersive Wisdom, began patrolling remote areas of Tyndall Air Force Base in Florida. They are expected to become an important component of base security. The Q-UGVs are ideal for the task, as they can navigate difficult terrain on their jointed legs and can operate across a broad range of temperatures.

There’s another market for robotic pets, too (though not for Spot or Q-UGVs): healthcare facilities. There’s been interest from that sector for a while—a Japanese company began marketing PARO, a robotic, plush white baby seal to facilities in 2009. Many nursing home residents once had beloved pets; though they can no longer care for one, they may still be able to enjoy one. 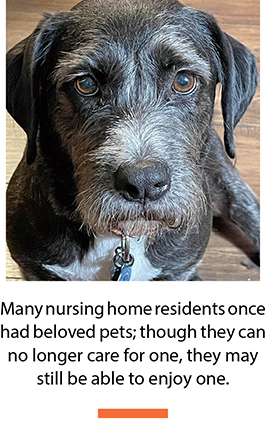 A bonus for the PARO: listed by the FDA as a biofeedback device, its purchase and use by therapists is covered by Medicare. It’s cost—about $6,000—limits the market chiefly to hospitals, nursing homes, and assisted living facilities. Dementia patients’ use of PARO has been documented to reduce the need for behavior-modifying and pain medications, and to reduce stress and anxiety.

The pandemic—with nursing home residents isolated in their rooms for months on end—served to silence some of those objections. It was only too clear that staff were stretched and stressed, and that residents were lonely, with few distractions and interactions. Suddenly, a soft, robotic cat that purred or a robotic dog that woofed and wagged its tail seemed like an idea worth trying, as families sought ways to relieve their loved ones’ loneliness and boredom.

But back to me, and my interest in a robotic pet. The Spot and Q-UGV, though each is well-suited to its purpose, consist of a sleek metal rectangle (the cameras) atop agile, spindly legs. They’re just not very visually appealing. The PARO is well out of my price range and—well—it’s a plush baby seal. What would I do with a seal?

I’d be seeking companionship, fun, and a bit of a technological challenge as I work to “train” my pet. I find a lot of joy online and get a kick out of using my Echo and Google Home devices. I’m looking hard at that Aibo, even as I cherish the time I get to spend, these days, with Becky.▼

Marj Shannon is a writer and epidemiologist.