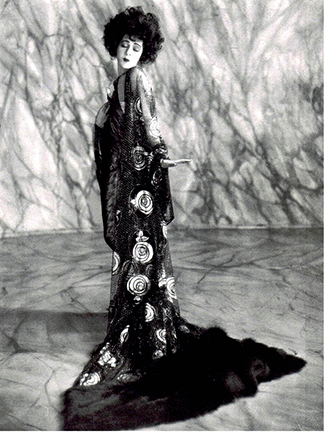 If you’re going to call yourself Alla Nazimova, you’re not planning a dull life.

Born Marem-Ides Leventon in 1879, the youngest of three children to Jewish parents in the Russian Crimea, her parents divorced when she was eight. The children were shifted among relatives and shuffled in and out of schools. The only emotional escape from this instability was, of course, a child’s immersion into fantasy, into a world she could control. A teenage Marem-Ides found it in theater. Determined to make a life on the stage, she enrolled in the Moscow Acting Academy.

Her talent was unleashed, catching the attention of the lively Russian theater crowd. She was invited to join Konstantine Stanislavski’s prestigious Moscow Art Theater.

She was soon a star of the company, outgrowing the routine of reparatory with its rotating assignment of roles. By 1903, she left the Moscow Art Theater to tour the Russian provinces.

In 1905, together with Orlenev, with whom she was having an affair, she went to New York. It was around this time that she created the name Alla Nazimova, taking the surname of Nadezhda Nazimova, the heroine of a popular Russian novel, Children of the Streets.

Nazimova’s New York performances, despite being in Russian, wowed the Shubert brothers, then the reigning Broadway producers. They offered her a starring role on Broadway on the condition that she learn to speak English in six months. She met the challenge and starred in Henry Miller’s famed production of Ibsen’s Hedda Gabler.

Nazimova spent the next few years earning rave reviews for her performances in other Ibsen plays, notably A Doll’s House. By 1910, her fame was such that the Shuberts financed a theater built just for her. The Nazimova Theater opened on April 18, 1910.

But the grander glamour of Hollywood beckoned. And, just as she’d conquered the American stage, Nazimova conquered American movies.

In Hollywood, she evidently also conquered quite a few hearts. There were love affairs, and a rather complicated “lavender marriage” with actor Charles Bryant: an arrangement that later had to be untangled in conjunction with Nazimova’s earlier marriage in Russia and divorce in the US, and Bryant’s eventual marriage to another woman.

But it was affairs with women which dominated Nazimova’s romantic and sexual life. Among her reported liaisons were actress Eva Le Gallienne, director Dorothy Arzner, writer Mercedes de Acosta, Jean Acker (Rudolph Valentino’s first wife), and Dolly Wilde (niece of Oscar Wilde). Nazimova used the term “Sewing Circle,” her code for the subrosa group of bisexual and lesbian women loving and bedding on the sly. Her Garden of Alla mansion was rumored to be the site of wild lesbian parties.

Meanwhile, Nazimova’s screen popularity soared. In 1917 she took control of her career, forming Nazimova Productions, writing screenplays under the pseudonym Peter M. Winters. She became a director, lighting designer, even a costume designer, mastering the technology and creative techniques of film. In 1922, she produced and starred in Salome. The film credits Charles Bryant as director, but there is evidence that Nazimova possibly directed the film. Not a critical success at the time, Salome has since been considered Nazimova’s finest work, employing unique cinema techniques. The movie was added to the National Film Registry in 2000.

By 1926, though, her Hollywood career waned. Nazimova sold the Garden of Alla, which was then converted to a hotel with 25 villas on the grounds and renamed the Garden of Allah.
Nazimova returned to Broadway, where she again triumphed. Critic Pauline Kael, in her pre-film critic days, wrote that Nazimova’s portrayal of Mrs. Alving in the 1935-36 production of Ibsen’s Ghosts, which Nazimova also directed, as “the greatest performance she had ever seen on the American stage.”

But Hollywood beckoned again. The advent of sound required actors who could speak effectively, actors who knew how to wield words instead of just their faces and bodies. Nazimova, empress of the stage, was a natural, appearing in 1940 with Robert Taylor in Escape, and with Tyrone Power in the 1941 remake of Blood and Sand.

Nazimova’s return to Hollywood had a touch of irony: she rented villa number 24 at the Garden of Allah hotel!

She’d also settled down romantically a bit, though just a bit. In 1929, Nazimova began a relationship with actress Glesca Marshall, a partnership which lasted until Nazimova’s death. That didn’t constrain Nazimova’s roving eye, and she conducted an affair with surrealist painter Bridget Bate Tichenor from 1940 to 1942.

Alla Nazimova died on July 13, 1945, of coronary thrombosis, at age 66. Her films immortalized her, her star on the Hollywood Walk of Fame honors her. Audiences—and her lovers—could never forget her. ▼