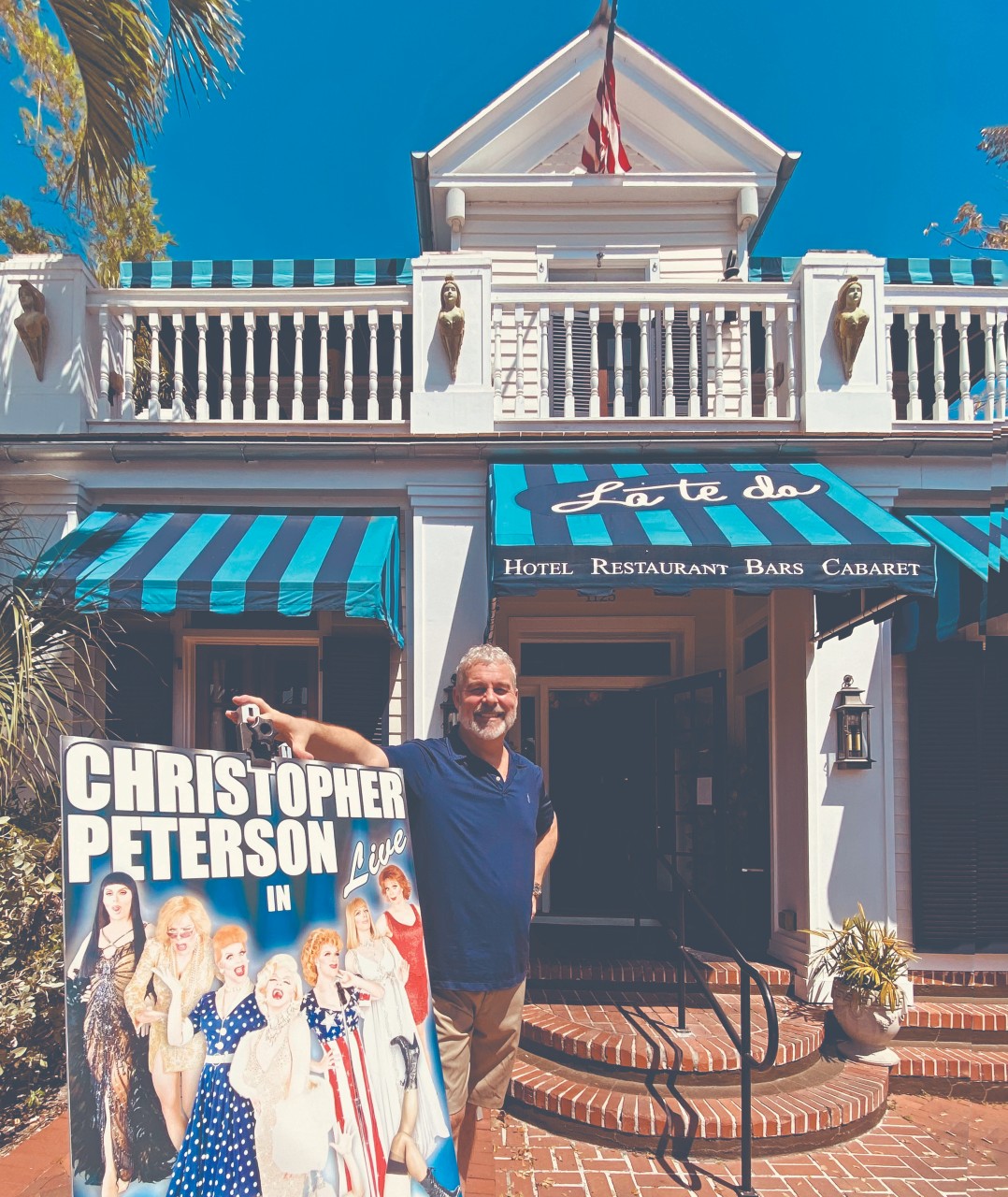 The Pirate King of the LaTeDa

The first time I set foot in Key West’s LaTeDa hotel and bar in the early 1990s, I couldn’t stop ogling the tasty selection of half-naked men who had gathered on a sunny Sunday afternoon to sip cocktails, dance, and cruise beneath swaying palms by the swimming pool. I thought I’d died and gone to heaven.

Fast forward 30 years. Men and women, gay and straight, still gather on Sunday afternoons at LaTeDa to sip and twirl as the day slowly relaxes into the evening. Yes, the LaTeDa tea dance is still a tradition in Key West albeit quite a bit tamer today. But that’s okay because so am I. And rather than tasty men, it’s the chicken wings, fried and coated in a sweet and spicy glaze of coconut rum and hot pepper, that have me licking my lips. It’s a personal recipe, according to current owner Christopher Rounds, whom I recently had the pleasure of hanging out with to learn the history of the LaTeDa.

But first a word about Christopher and his connection to Rehoboth. Before moving to Key West, he and his partner Patrick Hegarty lived in Fenwick Island for many years while running their two restaurants in Ocean City, Maryland—Tutti Gusti on 33rd Street and the Crab Bag on 130th Street. It’s no surprise then that Rehoboth became their preferred stomping ground when they weren’t working, especially the Nomad, the Blue Moon, and the Renegade.

The fellas still know a lot of people from those days. In addition, it should be noted that the one and only Christopher Peterson, a Rehoboth favorite, presents his Eyecons show in the LaTeDa cabaret most of the year. Another LaTeDa act—Patrick and Debra—now bring their music to Rehoboth’s Top of the Pines in the summertime. Perhaps all this helps explain why I almost always recognize someone from lower slower Delaware at the LaTeDa.

Anyway, back to our story…. The wooden-frame house that is now LaTeDa at 1125 Duval Street on the south side of Key West was constructed in 1892 by Teodoro Perez, the island’s premier cigar manufacturer and a well-known supporter of the Cuban independence movement. As soon as his house was finished, he invited his friend José Martí, the poet and head of the Cuba Revolutionary Party, to visit and to drum up money for weapons and ammunition.

As the closest port to Havana, the island was a hotbed of anti-Spanish sentiment. During his stay, Martí gave speeches from the second-floor balcony overlooking Duval Street. A large banner ran across the entire balcony railing reading “CUBA” in the middle and “Martí” on both ends. Local Cubans soon began referring to Perez’s house as “La Terraza de Martí” or “the Balcony of Martí.”

The house began catering to another set of revolutionaries in the 1970s when a small flamboyant man named Larry Formica bought the property and turned it into a rooming house for gay men who had begun coming to Key West in droves as word spread the island was an accepting, quirky, fun place.

Formica started off serving breakfast and eventually added a full restaurant and brought in a French chef. A 1982 travel piece in the New York Times refers to lunch by the LaTeDa pool where tables were dressed in pink tablecloths and pink napkins and fine crystal. Guests were served by waiters attired in bikini bathing suits.

It was during those heady days that La Terraza de Marti became shortened to “LaTeDa.” According to local lore, a drag performer named Holly Woodlawn mangled the name. Holly, it seems, was a Puerto Rican transgender actress from Miami who had appeared in several of Andy Warhol movies and claimed to be the “Holly” in Lou Reed’s song “Walk on the Wild Side.” The new name stuck.

By the time Christopher and Patrick purchased the property in 2013, the LaTeDa sadly was on its last legs. Larry Formica died in the 80s. Subsequent popular owners Mark and Claude passed away and the swank property passed to absentee family members in California who cared not a bit for it—or for Key West. “It was a wreck,” Christopher explains, “and but for the loyal staff who loved the place, it would have been totally run into the ground.” Christopher and Patrick, with their restaurant experience and creative know how, began methodically bringing the place back to life, starting with the iconic balcony of Martí, which according to Christopher, “was so rotted it couldn’t be used.”

Over the next couple of years, the two men renovated all the hotel rooms, replacing window air conditioners and pulling out all jacuzzi tubs and mirrors. They redid all the bars and replaced all the decking, expanded and upgraded the kitchen, and even resurfaced the bottom of the swimming pool.

My favorite renovation anecdote is the one Christopher tells about two queens in the hive—and no, he’s not referring to Christopher Peterson and Randy Roberts, the divas who do their shows in the second floor cabaret. Seems that during work on the balcony, everyone kept hearing a faint buzzing sound and assumed it was coming from an old electrical socket due to be replaced.

Well, you guessed it, the buzzing was due to thousands and thousands of honeybees. The entire inside of the front wall of the house was infested and when the bee experts began removing the bees, they discovered an enormous hive. As the experts gently extracted large sticky slabs of honeycomb, they found two queens in the hive, a rare, but not unheard of, occurrence. For the LaTeDa, however, it seemed apropos. And the honey? “We used it on our cheese plates,” Christopher says with a sly grin.

Christopher’s hard work hasn’t been limited to the property. His commitment to the greater Key West community is well known. He’s a supporter of causes for animals and kids and opens the LaTeDa each year for Toys for Tots and Pride events. In 2016, he was named a Fantasy Fest King, one of Key West’s top honors, and raised over $340,000 for local AIDS charities.
The LaTeDa is such an institution in Key West that in 2020 Jimmy Buffet even wrote a song about this special place at the end of the world where the perfect margarita awaits you when the sun goes down and the pirate king buys all his guests another round. 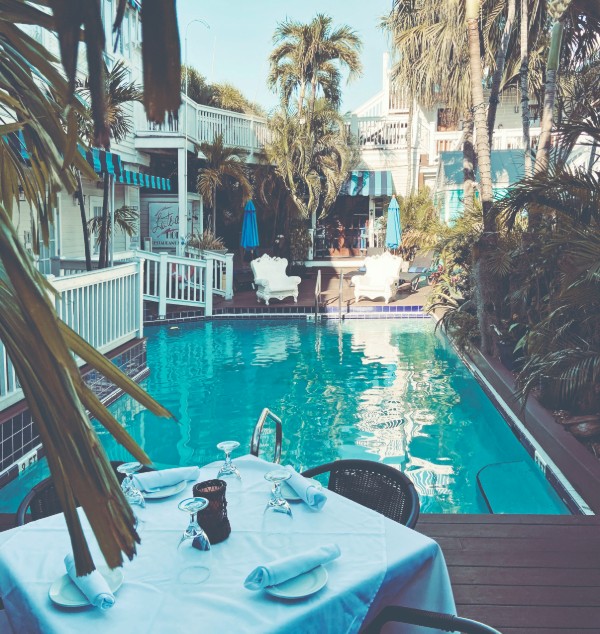 This past year, Christopher and Patrick put the finishing touches on a new project—a home in Rehoboth’s North Shores neighborhood, cattycorner to President Biden’s house.

Christopher says the house is a retirement place, close to both of their families, and that he doesn’t have designs on a new project in town. Like the honey on the cheese plates, I’m not quite sure whether to believe him. He is, after all, a visionary, and a tireless showman, greeting all his guests with a big smile and a light touch to the shoulder or arm. Can a pirate king really sit still? ▼

Rich Barnett is the author of The Discreet Charms of a Bourgeois Beach Town, and Fun with Dick and James. ▼