On November 19, after a three-year hiatus, CAMP Rehoboth and the Volunteer Development Committee hosted a Volunteer Appreciation Party. The theme was “Giving Thanks,” in the spirit of the holidays. The spirit of gratitude was at an all-time high.

Catered food included turkey and cranberry sliders, stuffing balls, and other holiday-centric finger foods, while the decor team set up corn stalks and decorative turkeys throughout the atrium. Over 100 volunteers attended, and shared camaraderie as Thanksgiving drew near. On this day, and all days, CAMP Rehoboth thanks all its volunteers for living its mission to create a more positive Rehoboth. ▼

CAMP Rehoboth stands with the victims and loved ones of the five killed and many injured after a hate crime shooting at Club Q, a gay nightclub in Colorado Springs on the eve of Transgender Day of Remembrance. May their memories be a blessing.

There has been a fund set up—the Colorado Healing Fund—for the victims and survivors of the Club Q shooting. According to CenterLink, the Fund is where people are encouraged to direct financial resources: coloradogives.org/organization/COHealingFund.

The Colorado Healing Fund was founded in 2018 in the Colorado Attorney General’s Office by victim advocates and community leaders. It was established for the express purpose of providing a secure way for people to directly support those affected by mass tragedies in Colorado.

The fund’s Board of Trustees has already authorized $50,000 to be made available for the immediate needs of victims and their families. ▼ 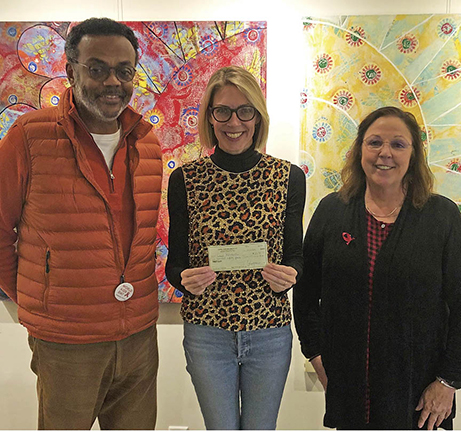 Giving Tuesday was a big success at CAMP Rehoboth, thanks to the generosity of 34 donors who contributed a total of $8,695, exceeding CAMP Rehoboth’s goal of $7,500. No event is successful without the help of many supporters and CAMP Rehoboth sends a special thank you to Natalie Moss for her generous matching gift of $2,500 that encouraged so many donors to support CAMP Rehoboth on Giving Tuesday.

Special thanks to Coral Cove, a small business in downtown Rehoboth, who donated 100 percent of their sales, totaling more than $2,000, on Giving Tuesday.

On December 1, CAMP Rehoboth hosted a community service of hope and remembrance for World AIDS Day. Community members walked to All Saints’ Episcopal Church, where a portion of the AIDS Memorial Quilt was hosted. One of the panels featured Rehoboth Beach’s own Tom Wilson.

The service featured blessings, performances by the CAMP Rehoboth Chorus Ensemble and soloist Donna de Kuyper, and opportunities for attendees to share names and stories of loved ones who had passed away from AIDS.

CAMP Rehoboth Health & Wellness Coordinator Amber Lee said the work to prevent HIV/AIDS is ongoing. “Something that is free and only takes 20 minutes can impact the rest of your life,” said Lee, remarking on the importance of getting tested regularly. “Know your status.” ▼

Passing the Respect for Marriage Act

In late November, the Respect for Marriage Act (RFMA) passed the United States Senate as a bipartisan effort to codify the right to marry for same-sex and interracial couples. To honor this, Senator Tom Carper visited CAMP Rehoboth on Friday, December 2. “Every American deserves the constitutional right to enter into that profound union—marriage—with the person they love,” said Carper in a statement on the historic Senate passage of the bill. Aws of this writing, the legislation also has passed the House of Representatives.

“We are so appreciative that Senator Carper took the time to celebrate this legislative milestone with us. Having the right to marry the one you love is fundamental to the concept of family—the Respect for Marriage Act certainly aligns with CAMP’s mission to support fundamental rights for all,” said Leslie Ledogar, Vice President of the CAMP Rehoboth Board.▼

Book a Women’s FEST Stay for 30 percent Off!

CAMP Rehoboth has something particularly festive for spring: next year’s Women’s FEST, taking over Rehoboth Beach from April 27-30! 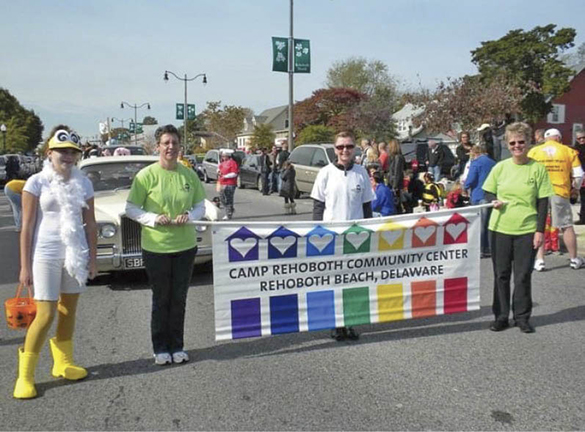 When I was reading the November issue of Letters I saw that it said that this year was the first time in the Sea Witch® parade’s history that CAMP Rehoboth was represented. Not so!

I’m happy to report we were in the parade in 2010. There were not a lot of us folks from CAMP Rehoboth, but we were so proud to represent CAMP in the parade that year. I was on the board at the time; I cannot remember if Kathy [Wiz] was yet. We wanted to have CAMP represented and so put a team together.

It was not something we planned well in advance. I believe we asked for volunteers via email. Sue Goudy had purchased the 1967 Rolls Royce Silver Shadow at the 2010 Sundance Auction and the car was part of our team (see photo).

I still remember the judges announcing CAMP Rehoboth—it filled my heart with joy. I had been taking my friends and nieces & nephews to Sea Witch for years, and to hear CAMP announced was wonderful!

I was so happy to see CAMP represented—again this year—as I watched the parade go down Rehoboth Avenue!

Send letters to the editor (up to 300 words) to editor@camprehoboth.com