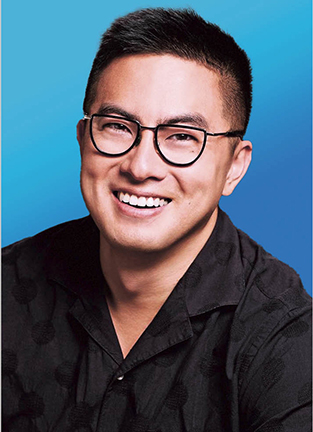 Maybe Bowen Yang will just forever live the Fire Island fantasy wherever he is. Is that what happens when you make a movie in what many consider gay paradise? Who knows, but based on Yang’s attire on Zoom—a beaded, rainbow-colored flower necklace and a casual white-and-blue checkered shirt, his white undershirt exposed—the Australian-born Chinese American actor looks ready to challenge the rich, white gays known for essentially claiming the queer party town just off the southern shore of Long Island, New York, as their own.

But not in Hulu’s Fire Island, a movie that can make us believe it isn’t exclusive to any group as a boatload of intersectional queers—the main friend group is refreshingly Asian American and Black—sail away to the island for more than just wild nights and romantic seashore walks. They know what they’re getting into—drugs, drinking, and all those white gays—and they’re the kind of besties who know exactly what’s on everyone’s Fire Island agenda.

For some, obviously, that’s a little more than a snuggle. For Howie, though, that is a snuggle. Yang plays Howie, and his very good friend Noah (Joel Kim Booster, who wrote the script as a modern retelling of Pride and Prejudice) knows that Howie won’t ever be the slut he wants him to be. “You’re cute, you’re funny, you’re consistently the least repellent of men out of all of us,” he tells Howie, earnestly. The same could be said of Yang.

In a recent conversation, Yang chatted about being a leading man for the first time.

Chris Azzopardi: Every time I watch a queer movie, I just wish it existed sooner.

Bowen Yang: Is that like our lot in audience life? I think we’re just gonna think that for everything.

CA: So the whole time I was watching Fire Island, I wanted to know how you got cast as Howie, the non-slutty character?

BY: I think Joel was doing this great thing, which is to map it onto our friendship a bit while also mapping it onto the source material of Pride and Prejudice and having it be like Jane and Liz. But then also just outlining the ways that a lot of queer people, and maybe specifically gay men, might not share an organizing principle in that way. Like, there are some people who really go for it and just catch as many Pokémon as they can, so to speak, and there are some who choose not to.

BY: Oh, and then that shifted?

CA: It did shift. And it feels good.

BY: Great. I think maybe that’s in store for me.

BY: I mean, if you create a liberated space for people, then their thoughts might kind of reach just a bit beyond the pale in a setting outside of that. And so I think Joel’s whole thesis for the movie is “what happens when gay people go to an all-gay space, and then gay people start to bring all their societal baggage onto each other and turn it inward.”

I think he did a great job of balancing all those things. I think he just recognized that Fire Island is this wonderful stew pot full of different kinds of people, and that you get all these different elements to that when everyone co-mingles in that way.

CA: I love that there’s a group of queer people of color who are just like, “Gonna sail over, and you know? This is also our place.”

BY: Yeah. And in my experience going there—and I go at least once a year, every summer—it is weirdly still a given that you’re gonna see that it’s a bit dominated by one kind of person.

I’m always really delighted by the people I see there who are there driven by the same sort of mission of just spending time with their queer friends. Going to the beach, just getting away from all the things that sort of bog them down on the mainland.

CA: I’ve never been to Fire Island, but I think I may be more of a P-town gay.

BY: Listen, I am about to go there for the first time this summer. And part of me is a little scared that I’m gonna be a turncoat and just fully, like, be a P-town gay for the rest of my life. ▼