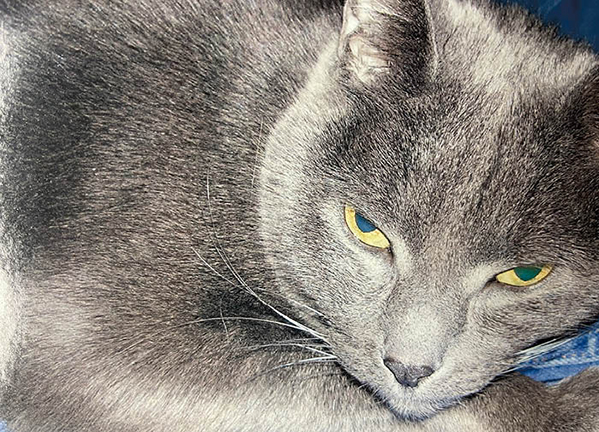 “How about this little grey one?” my partner asked, as we perused the rows of kitties at the Montgomery County, Maryland, animal shelter that spring day in 1991. She was all by herself in a cage on the bottom row, a tiny baby curled up in her litter box. I hadn’t seen her on the first pass. I hunched down and she came forward, her little green eyes sparkling with mischief. All grey, with three little white furs on her chest. The shelter lady tried to warn me off. “Oh no,” she said. “She’s feral—we found her in a field all by herself. She may not make a good pet.” But in my heart I knew we would be bringing this kitten home. And after we passed the shelter’s required home visit, I went back to retrieve my little Lucy.

Lucy was, indeed, a little hellion. It took some time to get her used to being inside the house. Her sharp little claws and teeth lacerated my flesh as we got used to each other. She would play for hours with string, plastic springs, and crushed-up cigarette packs that she would fetch and chase after again and again. It took time, but Lucy eventually became a cuddle bug, sleeping on my pillow by my head.

In 1993, my partner’s work took us to New York City. I got a job at a radio station in the Hamptons and my partner bought a Brooklyn brownstone. Lucy and I were together in my apartment in Montauk while my partner would join us on the weekends. A year later, I snagged a job in Manhattan and Lucy and I moved into the brownstone. She much preferred all the opulent space (four floors of it) and she was able to play in the backyard.

My bond with Lucy intensified when my partner and I realized, after seven years, that we could no longer be together. One of the hardest things I’ve ever done was leave that relationship. By that time, I was working as political speechwriter. On just my salary, I could afford only a tiny, shabby, junior-one-bedroom in Brooklyn Heights. I was so sad and depressed I stayed on the living room floor for three days. I couldn’t move or unpack. Lucy’s fur soaked up gallons of tears.

Months later, I found a much larger apartment in Park Slope. It was a railroad fourth-floor walk-up, and every night as I grabbed my mail from the slot on the ground floor, I could hear Lucy “eeping” in excitement as I climbed the stairs. The “eeps” would grow louder and then came the joyful headbutts, moto-purring, and lap jumping when I came through the front door.

Lucy and I were happy together there for many years. My apartment had a window with just enough room for her to catch the afternoon sun as it set. We lived through 9/11, the discovery of a terrorist cell making bombs in the building next door, and numerous relationships.

She even helped choose the woman who became my wife. When Lucy met her the first time, she sat on Sandy’s lap—something she had never done with anyone else, as if to say, “see, Mom, pick this one.” And I did. So we moved yet again, this time to Delaware, so Sandy and I could be together.

Lucy had been having kidney trouble while we were still in New York, a condition that was manageable with diet and meds. But it was chronic, and it worsened as the years passed. Then, soon after she turned 18, she got much worse very quickly. You know how this ends. She let me know it was time, so we took our last trip together to the vet. I was with her for the shots and saw her out of this world and across the bridge. I had read about keening but had never experienced it until then. My grief was immense, and her death still brings me to tears, 13 years later.

I love animals and am blessed to share my life with two German shepherds and three kitty brothers that we rescued after Lucy died. I dearly love them all. But there is a special place in my heart for Lucy. She holds part of my spirit. And we will meet again. I have a feeling I’ll hear her “eeping” to welcome me when my time comes. ▼

Beth Shockley is a public affairs specialist and a former editor of Letters.