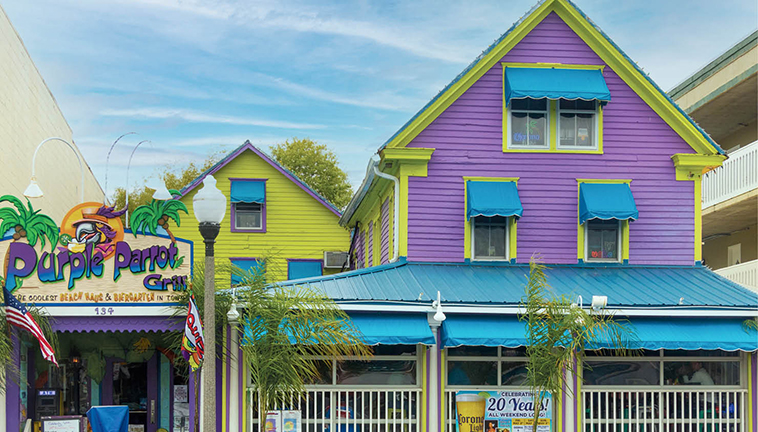 Purple Parrot Grill is one of those places everyone goes when they want to have fun. It’s a great place after a day on the beach, or for a beer on a rainy afternoon. It’s open late—even in the dead of winter, and the joint is always entertaining, whether they have paid entertainment or not. Spend an evening drinking at picnic tables in the Biergarten or come to sing karaoke.

We parked on Wilmington Avenue and entered through the Biergarten, which was surprisingly full for a not-so-warm April evening. Though the restaurant and bar were brimming with folks of all ages, we were seated without a wait, and our waitress, Kristina, took our drink order within a minute of being seated.

I started with the Crab & Artichoke dip, served with an assortment of colorful tortilla chips. The succulent dip was covered with a melted cheese (Cheddar jack and Parmesan), and the chips were sturdy enough to hold a good-sized serving of the dip. (I warmed up my leftovers for lunch the next day, adding a dash of creole seasoning—yum!) My husband, Mark, had the Crab Balls—a smaller version of their very popular crabcake—and he finished the basket of five in nothing flat.

I ordered the Pork Schnitzel as my main course—one of a few German favorites still on the menu to honor owner Hugh Fuller’s heritage—served with mushroom gravy, red cabbage, and steak fries. The fries were crispy and seemingly homemade, though Kristina admitted they are frozen pre-seasoned. Don’t discount the joys of a good fry no matter what it was doing before it hit your table.

Mark indulged in the Parrot’s Famous Jumbo Wings served Asian style, which he reported were “meaty with a nice kick.” You can also have them Teriyaki, Plain Jane, Old Bay, or Buffalo Hot.

For dessert, there’s Key Lime pie, Cheesecake, and a Chocolate Lava Cake. Mark ordered the cheesecake drizzled with chocolate and finished every delectable morsel. I found the promise of “The Best Key Lime Pie outside the Keys!” irresistible. And, indeed, the in-house creation was one of the tastiest I’ve had in the area with exactly the right proportions of tangy key lime juice and zest to custard, with a sturdy graham cracker crust, and three large dollops of sweetened whipped cream.

Pandemic supply chain shortages have hit food suppliers particularly hard. But the paucity of certain foods seems to have worked to the Parrot’s advantage as they were forced to pare their extensive menu to a more (ahem...) digestible size.

Notably missing is their infamous “Parrot Poop Dip” (spicy black beans and avocado)—something my children always loved when they were young. Their weekly specials continue to be popular, from their Sunday Brunch (9:00 a.m.-1:00 p.m.) to the Prime Rib special starting at 5:00 p.m. Mondays are Meatloaf & Taters ($7.75) or their “Famous One-Pound Burger with Fixings Bar” ($8.75). I’ve heard good things about their Friday $10 Fried Fish Sandwich, and Thursday $9.75 Prime Rib Sandwich.

The new menu features 10 appetizers, from a basket of those delicious fries, coconut shrimp, peel-and-eat shrimp (half- and full-pound), a veritable cornucopia of nachos, as well as jumbo clam strips, and The Big Helga—a giant German pretzel with horseradish cheese sauce. If you leave the Parrot hungry, it’s not their fault.