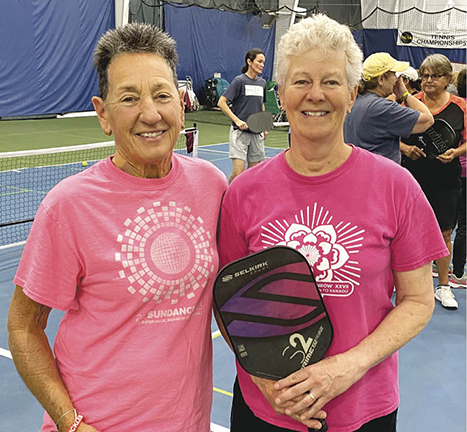 Can you have a Women’s FEST weekend where hundreds of lesbians gather, without sports? Clearly not, as several hundred women participated in the 18-hole golf, 9-hole golf, pickleball, and cornhole tournaments throughout the weekend.

The sports at FEST began on Thursday with an 18-hole scramble. Twenty-one teams were registered, but rain and cold weather prompted three teams to cancel. Those remaining toughed it out earning prizes for the first and second place team.

First place winners were Carol Miller, BJ Ferguson, Mary Ann DeLorenzo, and Linda De Wick, at six under par. Just behind them, at five under, were Erin Reed, Beth Petite (more on her later), Lisa Lekawa, and Lori Guitson (more on her later, too). And, at four under par, was the team of Barb Thompson, Joann Yurik, Lisa Dillon, and Diane Statina (also more on her later).

Even more winners at the 18-hole event included four “closest to the pin” contests, won by Ann Reed, Barb Lewis, Clare Kennedy, and Kathryn Martin. Longest drive was won by Lori Guitson (even more on her later).  The contest that might be called “straightest” drive, but this event calls it “closest to a line down the fairway,” was won by Deb Bievenour.

In the B flight, the top place was claimed by Katie Rickards and Susan Martyn, while second place went to Mary Jo Tolliver and Maddie Cunningham. Terry Koff and Claire McCraken took third place, while Michelle Steadman and Stacey Hannhoe finished fourth.

In the A flight, the toughest of the competition, the first-place finishers were Karen Faber and Alexa Rupnik in a hard-fought game against second-place finishers Kathy Dougherty and L’Oreal Endy. Taking third were Lori Guitson and Beth Petite (a double win for this team, golf and pickleball). Rounding out the fourth place were Diane Sweeney and Cindy Murphy.

On Saturday, the final competition of the weekend was held. For the first time, the cornhole tournament was played on the beach. Thirty-two two-player teams battled it out for the championship. In first place were Carol Pellicano and Jody Foster. Second place was claimed by Karen Jorgensen and Diane Pasetieri (this very athletic team also placed in pickleball). Third place finishers were Beth Toney and Molly Quinn.

While all these women were winners in their respective events, it is also fair to say that all participants were winners. There were reconnections with old friends, meeting new friends, seeing some amazing play, and mostly just having fun.

And the list of volunteers for each event is almost as long as the list of champs. None of those events would have happened without the tireless help of the volunteers setting up, scoring, and generally keeping things moving. Big kudos to those women!

Shout out to the facilities who rented us their spaces for our tournaments and made everyone feel so welcome: American Classic Golf, Dave Marshall Tennis, and The Rookery.
And finally, each sport was coordinated by women who spent weeks and months working with the venues, arranging pairings for play, and keeping it all running smoothly. The event coordinators are the biggest winners of all: Barb Thompson in 18-hole golf, Nan Martino in 9-hole golf, Mary Rossetini and Sandy Oropel in pickleball, and Rina Pellegrini in cornhole. You made the weekend a huge success. Here’s to all the winners!

Connie Fox is a retired university administrator and sports coordinator for Women’s FEST.