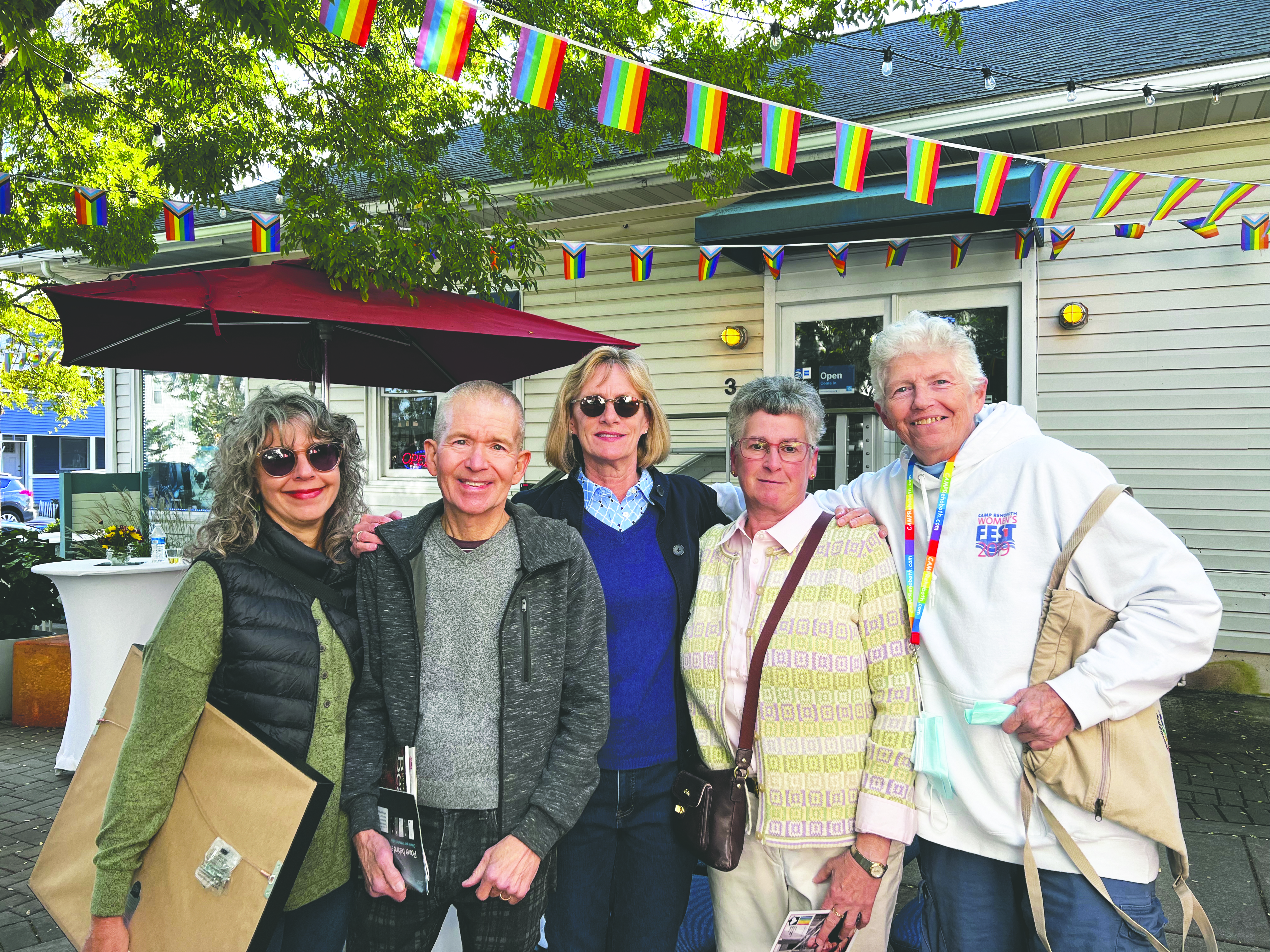 Dedicated to a Higher Cause: Community

On Saturday, October 8, the CAMP Rehoboth community gathered to dedicate the room formerly known as “the big room” as the Elkins-Archibald Atrium. A lot of time has been spent in that room, from community meetings to art exhibitions, from theater to the spookiest Halloween parties ever. From the signing of Delaware SB-121—the bill that added sexual orientation to Delaware’s non-discrimination legislation—to wedding receptions to memorials for too many, I’ve personally been at a lot of events under that roof that have included both laughter and tears.

It was flawless weather to enjoy the courtyard and see so many friends. For many, it was the first gathering since 2019, which seems a lifetime ago. The program included comments from various Board members including current president Wes Combs, past-president Chris Beagle, and past-vice president (and Chair of the Arts Committee) Leslie Sinclair, Rehoboth Beach Mayor (and neighbor) Stan Mills, Speaker of the Delaware House of Representatives (and friend) Pete Schwartzkopf, and songs performed by Peggy Raley-Ward and the CAMP Rehoboth Chorus Ensemble. Some tears of joy were shed.

Family was asked to sit up front, which was likely a good thing, so nobody saw me pass my damp tissue to Mary Beth, to wipe her eyes, or the three of us clasp hands at one point and all look in different directions to keep from ugly sobbing in public. Coming shortly after both a family wedding and reunion, Mary Beth and I were the only ones representing Steve and Murray’s family (she true, me auxiliary), but we were backed by a crowd of “family” if you know what I mean. I noticed at one point that our feet sat on the heartstone in the center of the courtyard, its faded inscription dedicated to Steve and Murray by Ward Ellinger and Allen Jarmon in 2006.

In the speeches that day, Steve and Murray were celebrated for their vision and leadership, and Murray acknowledged that there were also a lot of other people whose dedication was a guiding force in the vision of the physical CAMP-us. From many town hall meetings to countless volunteer hours, from fundraising to programming, so many folks stepped up and worked hard because they were dedicated to the same vision. 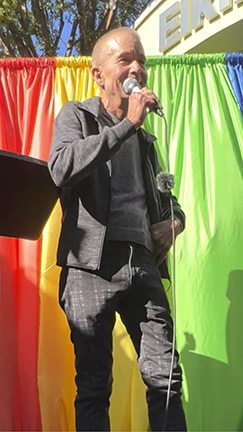 Even before that day, and my being asked to report on it, the many meanings of dedication had been on my mind. Dedicating a physical space, dedicating a book, being a dedicated worker, being dedicated to a task or purpose…it seemed to me that we’d be celebrating the enormous commitment that it’s taken to amalgamate the power of this community, in addition to dedicating a physical space to permanently acknowledge the leaders at its heart.

Often, I’ve pondered whether it was Pied Piper-ing or Tom Sawyer-ing that Steve and Murray did to get so many people involved, but in looking up those references, they both have a deleterious tone. We weren’t being led along by false promises or being asked to do anything they wouldn’t do themselves. We just shouldered whatever part of the load suited our superpowers and plowed ahead. We, and countless others.

Mary Beth and her husband Bob Ramsey, I and my husband Ron, plus dogs, all bunked up in the little apartment that Steve and Murray rented at 39 Baltimore Avenue since 1990, and as amazing as this sounds, we somehow adhered to a “house rule” to leave the business of CAMP Rehoboth behind. I think it is because the house came before the organization even existed. 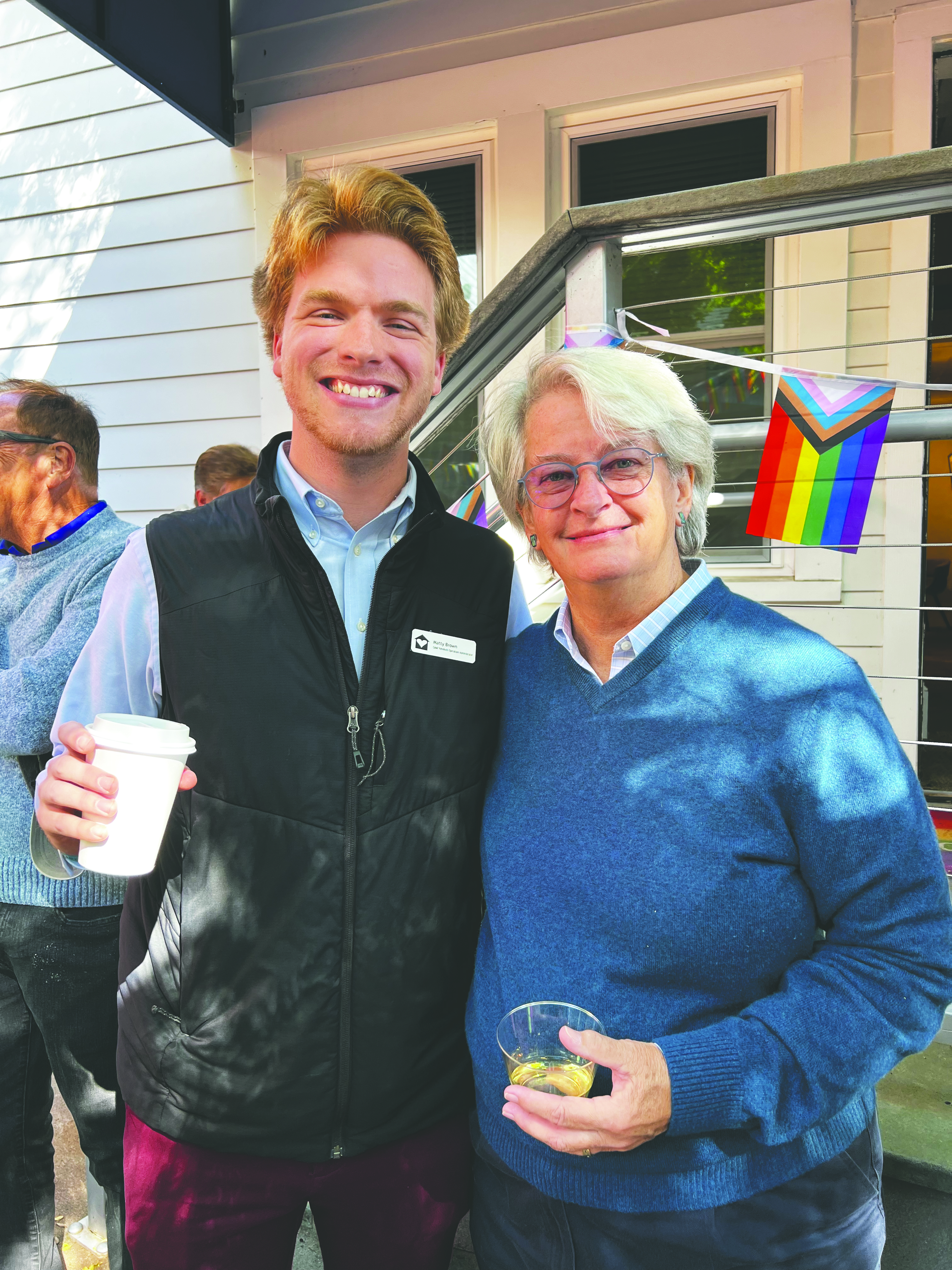 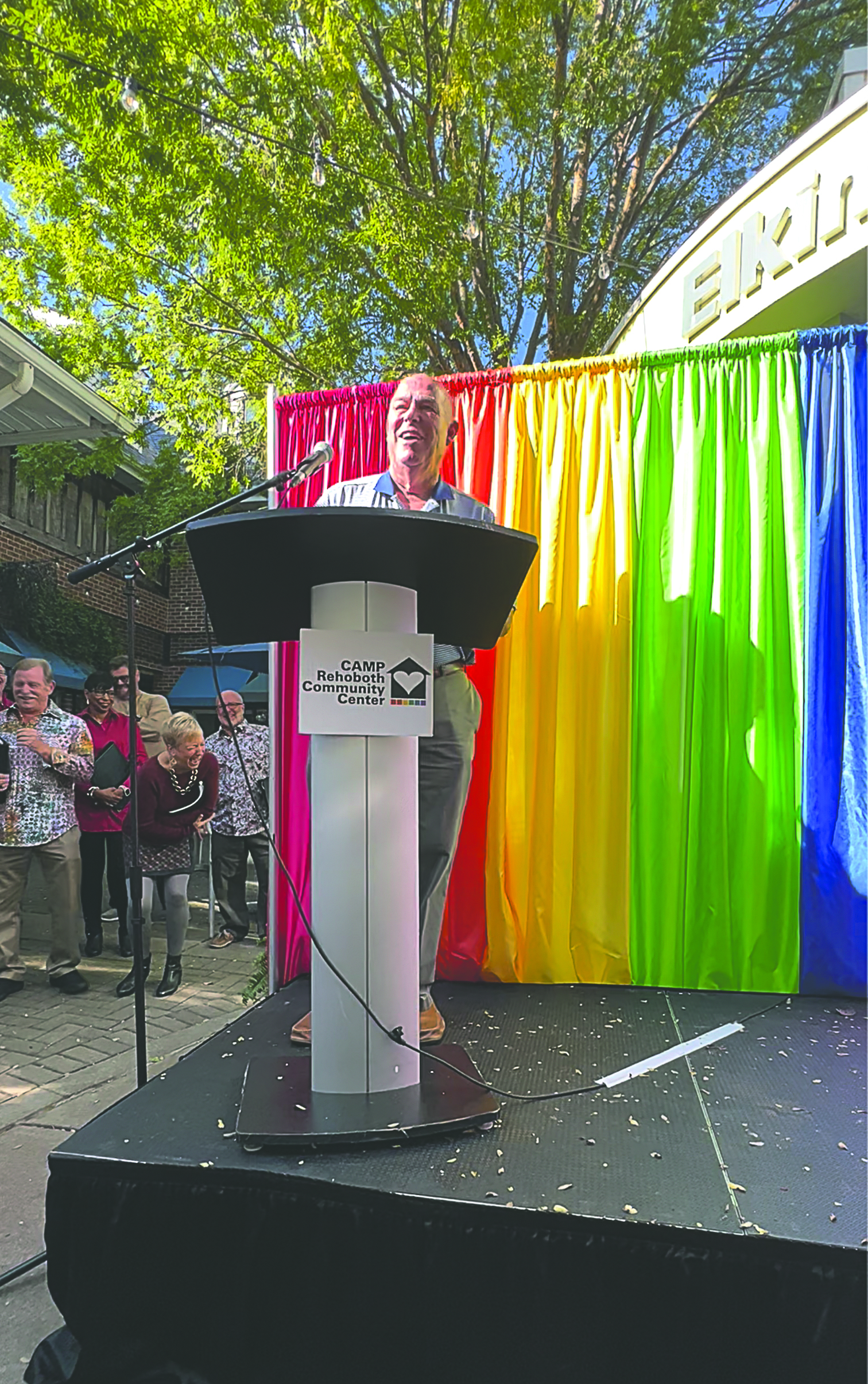 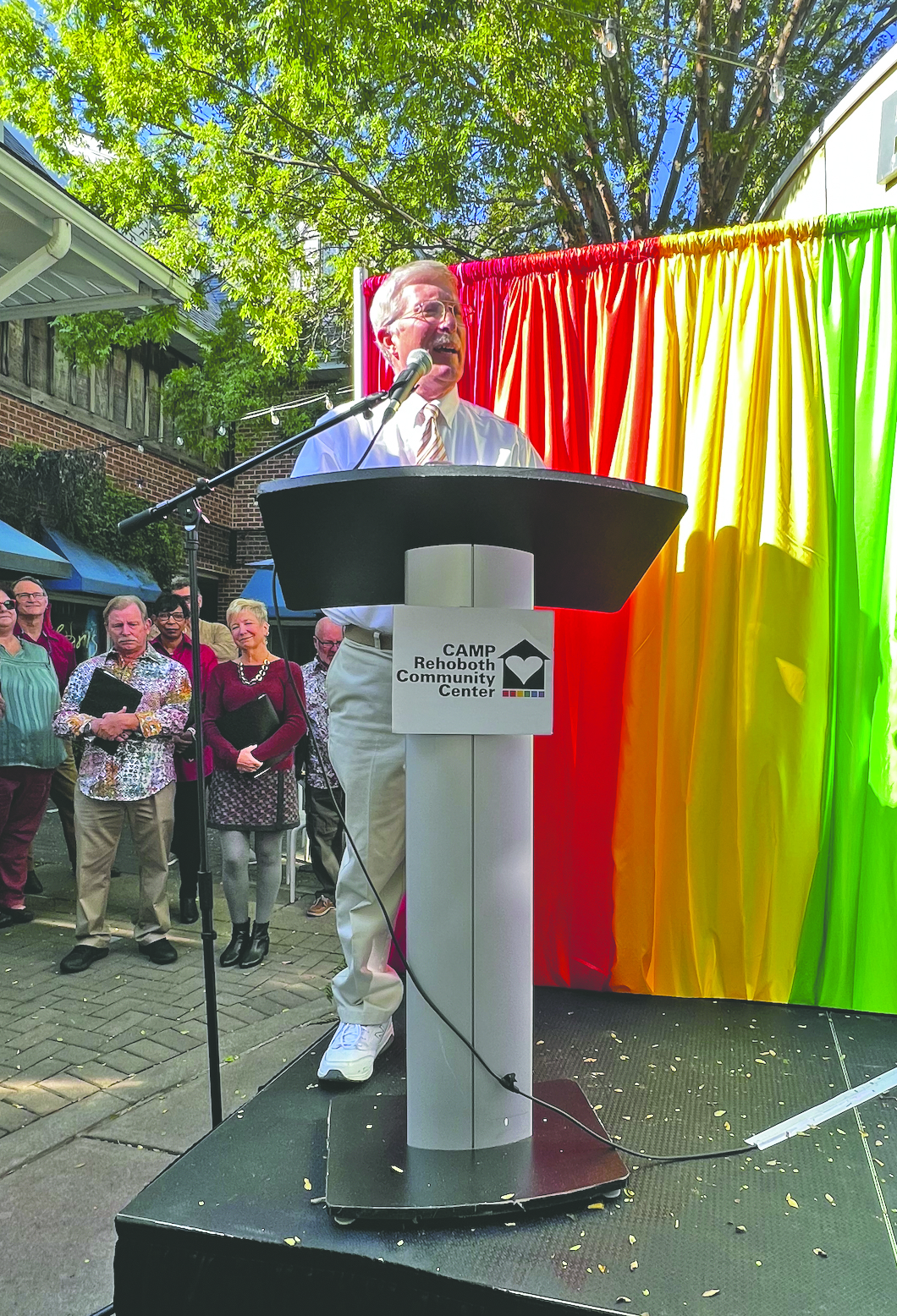 But more than a decade ago, we noticed that Murray had given up creating in the studio to work full time as a volunteer, and frankly the best way for us to all spend time together was to work on CAMP Rehoboth stuff. And so more and more we found ourselves in the office, or toting and carrying, or loading in and out, or sweeping up, or preparing for whatever event was on the schedule. We worked hard and had fun doing it for our community.

But every board member, every volunteer, every team captain, every staff member—everyone connected with CAMP Rehoboth—works hard and is dedicated to making the organization work. We all want to have fun and be good hosts and set good examples and be a positive influence. We all want to hang out with our community and make safe spaces and address inequalities and make a difference. We dance, we work, we travel, we laugh, we bitch, we march, we cry, we hang out, we move on. We did, and do, those things together. 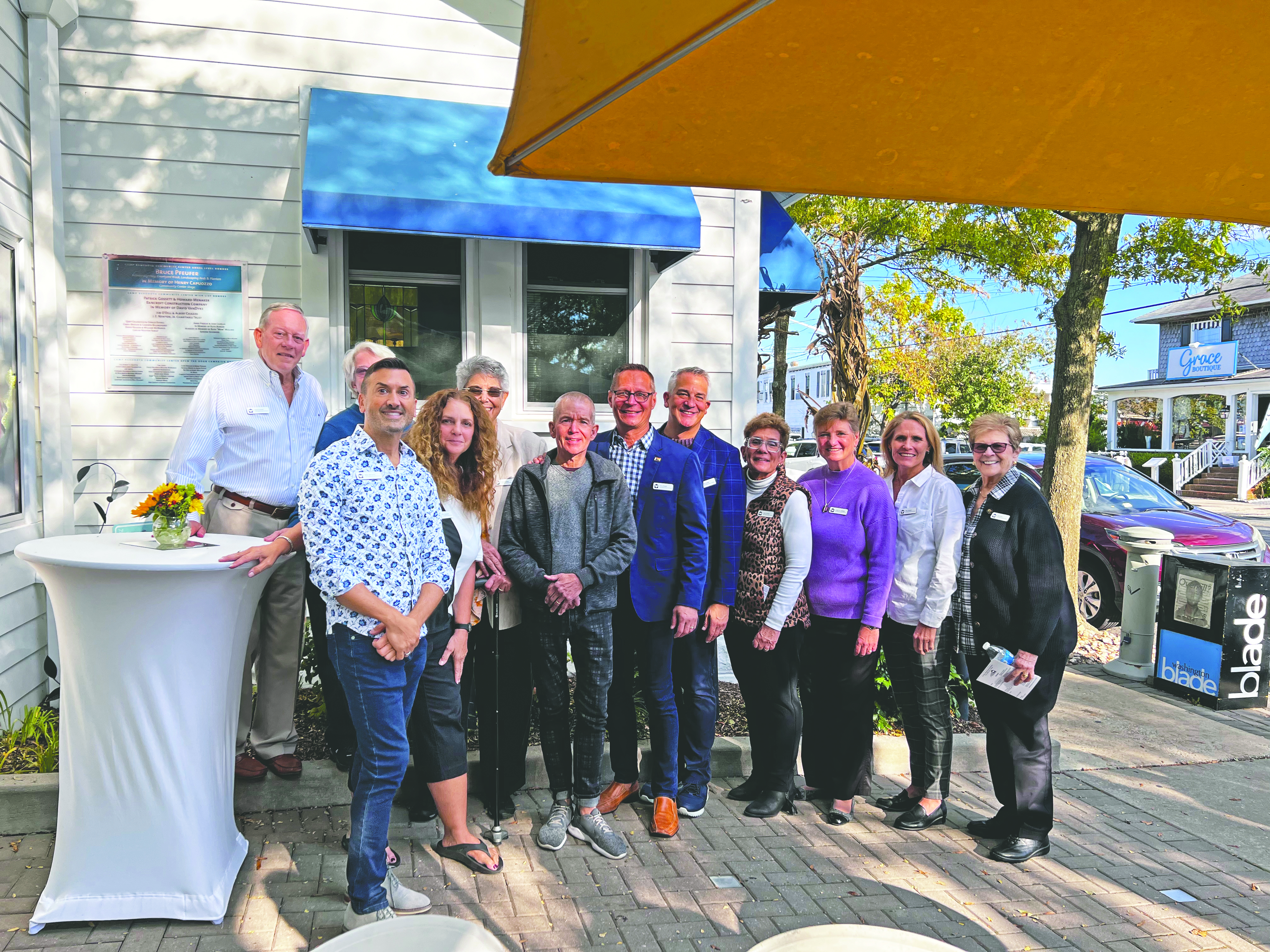 While we honor Steve and Murray with this naming, in this issue we also honor other leaders. With several board members coming to the end of their service, we honor Chris Beagle, Jane Blue, Natalie Moss, and Leslie Sinclair for their more than full-time dedication to this organization, for many late nights, weekends, and overall extraordinary work. Moving on while staying connected can be challenging; being connected while no longer in leadership can be tricky; but staying dedicated to the organization’s mission and giving support while sitting on your hands is easy. Okay, easy-ish.

Lastly, I couldn’t have been more delighted that Chris Flood at the Cape Gazette used the title I quipped of “auxiliary sister” in his photo caption, or when that photo and caption were texted to me with a giant red heart drawn on from our friend John Sadler, formerly of Abizak’s—the retail space on Rehoboth Avenue where Dos Locos is now—who read the story online from Asheville, NC.

We move on. Murray has moved out of the little apartment to our house “out on the highway.” I gotta admit it is weird to be outside of downtown and not have Baltimore Avenue be the nexus of our Delaware universe. But our community stretches wide and far with people who share our ideas of love and friendship, so, we will see you around. Even through changes in leadership, we all remain dedicated to a higher cause: community. ▼

To the Board of Directors, staff, and friends of CAMP Rehoboth,

Transitions are not easy. The leadership of CAMP Rehoboth was aware of that fact years before the need for a founder transition arrived. That transition, as they so often are, was hastened by Steve’s death in 2018 and by my decision a year later to step back from my leadership role.

Transition plus pandemic made the task even more difficult.

I say all that as a backdrop for my deep appreciation to everyone who worked to make the dedication of the Elkins-Archibald Atrium a special and memorable day.

The process of change is rarely easy, but eventually we come to a new understanding—to a new alignment with the world within us and around us.

The Atrium Dedication was just such a moment.

Standing in the CAMP Rehoboth courtyard with family, friends, friends who are family, community leaders, and the leadership of CAMP Rehoboth—there was a powerful sense of healing.

The last few years have not been easy for any of us. We have all tried to find our balance in this sometimes-strange world that seems to have become our new reality.

The Dedication reminded us of the essence of CAMP Rehoboth: love, laughter, hope, and a never-ending welcome for all people.

Room for All. Heart of the Community. All means all. Those are sacred words for CAMP Rehoboth, and the building blocks upon which it was built.

And they still stand today.

My deepest thanks to the Board, staff, and volunteers who worked to make the Atrium Dedication an afternoon I will never forget.

I am honored and thankful.