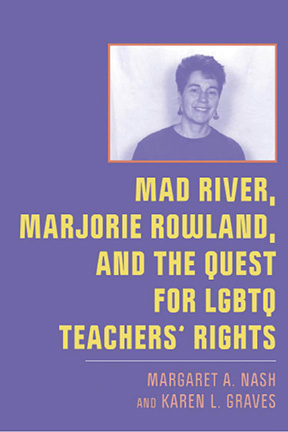 Tuesday evening, November 1, you may want to be at the Lewes Library. Three courageous leaders in advocacy for LGBTQ rights in Delaware and the country at large will be making a special presentation. These three committed leaders are Mike Brickner, Executive Director of ACLU of Delaware, and Karen Graves and Margaret Nash, co-authors of their new book, Mad River, Marjorie Rowland, and the Quest for LGBTQ Teachers’ Rights.

Margaret is professor emerita at the School of Education at the University of California Riverside, now living in Cleveland, Ohio. Karen is a retired professor in the Department of Education at Denison University in Granville, Ohio. Both will be present in Lewes to introduce their book.

Few people know about Marjorie Rowland. She was an Ohio guidance counselor who was fired in 1974 for being bisexual. A legal case, Marjorie Rowland v. Mad River School District, went through the courts up to the Supreme Court. The Justices there declined to hear the case, however. In his dissent, Justice Brennan laid out riveting arguments for why the First and Fourteenth Amendments apply to bisexuals, gays, and lesbians. His published dissent has been the foundation for LGBTQ civil rights advances since.

Mike shared a story of a traumatic experience that he helped resolve through Ohio’s ACLU. A gay student was beaten up at school and subsequently suspended from school for getting beaten up. This took place in Chillicothe, Ohio, a rural town south of Columbus. ACLU attorneys defended this student in court and were able to secure a fair settlement from the school district.

Here in Delaware, there is no shortage of instances where LGBTQ students face opposition and discrimination in schools. The need for resources and support has never been greater. That is what Mike and ACLU of Delaware are prepared to provide.

The event in Lewes on November 1 is open to the public and will involve a panel discussion on the Know Your Rights Guide from the ACLU. This guide highlights First Amendment rights that students have but may not understand. Using your preferred pronouns, expressing your true self, having the school district use the name that you choose, and being treated with basic human dignity and respect all derive from First Amendment protection.

Following this panel discussion, Margaret and Karen will share from their book the lessons learned during the early 1970s through the following decades. These lessons are intended for primary and secondary educators, students, and their families. They are also for everyone who values free speech, equal protection, LGBTQ rights, or the democratic potential of our school system. As presented in their book, Marjorie Rowland’s legal case also invokes First and Fourteenth Amendment issues.

Margaret and Karen focus on key issues in education. “At the core of citizenship education in the United States is the teacher’s responsibility not only to ensure that students’ rights are protected but also to protect their own constitutional rights…. Educational institutions claim a particular responsibility to the notions of free inquiry and debate. When school officials stifle speech and close off debate on LGBTQ issues...they betray the basic principles of academic freedom.”

It is important to emphasize that this event at the Lewes Library will qualify for Continuing Education credit for attorneys (CLE), and for educators and social workers (CEU). It will begin at 5:00 p.m. on Tuesday, November 1. CAMP Rehoboth and PFLAG-Rehoboth Beach are proud to co-sponsor this event. Both professionals and students themselves will share common challenges and common goals in education. ▼