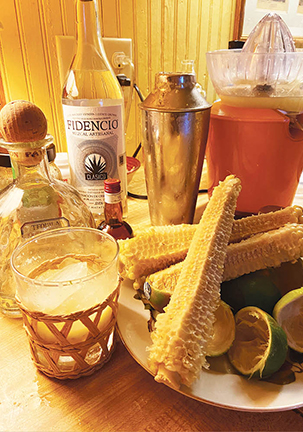 A Tippler’s Tribute to Late Summer

I don’t know about you, but I am not ready to give up the summer. My zinnias are at their peak and the cherry tomato plant now stands taller than six feet and continues to produce handfuls of sweet golden globes. It irks me that the American retail establishment tries to lure everyone into thinking about Halloween candy and pumpkin spice lattes when it’s still 80 degrees outside.

Just the other day upon returning from a late afternoon foray to the beach, I discovered three clothing catalogues in my mailbox, each one touting sweaters, jackets, and—heaven forbid—corduroy pants. I don’t even consider putting on a pair of long pants until after the UVA-Georgia Tech football game in mid-October.

No, I can’t turn my back on summer when the farm stands are still showing watermelons, lima beans, and sweet corn. Nothing says late summer, in my opinion, like sweet corn. And the sweet corn this season has been superb, which is probably why I found myself one evening staring at a stack of of ears on the kitchen counter and wondering what the hell I was gonna do with all of them. I certainly couldn’t eat 18 ears, but perhaps, just maybe, I might drink some of them....

What? I know it sounds a bit crazy until you remember that corn is the main ingredient in bourbon whiskey and moonshine. There is a relationship. I began snooping around and lo and behold discovered an entire genre of sweet corn cocktails. Okay, that’s a reach. But there are a few cocktail enthusiasts out there experimenting with sweet corn to mix up a “tippler’s tribute to late summer.” My words, not theirs.

Recipes for a corn-tini and a corn-y old fashioned caught my eye, but despite their use of sweet corn, they didn’t feel quite summer-y enough for my taste. Then I came across a slew of recipes blending corn with tequila. Now we were talking. Margaritas are made for summer. And a sweet corn one—perfecto!

I perused a few of these recipes just for inspiration. I tend to follow my own cocktail knowledge and instincts, and I do not like to follow drink recipes word for word. Trust me, I certainly don’t need advice on how to make a basic margarita. The tricky part with these corn margaritas, however, was the corn—or I should say, making the corn milk.

In every good story there’s an obstacle the protagonist must overcome to get what he wants, and in this case, it was the corn milk. I scraped the corn cob with a sharp knife. I brought out my sterling silver muddler and muddled corn kernels for about a half-hour until I feared I might sprain my wrist. There was no way in hell I was ever going to draw forth several ounces of corn milk by hand. When all appeared lost, my drinking companion suggested I use a food processor. Duh? But of course! All I needed to do was hit the liquify button and within seconds I had the elusive corn milk. It made me wonder if any of the purveyors of any of these corn cocktail recipes had even really made them.

Obstacle overcome, I moved on to mixing the margarita. Into a chilled cocktail shaker, I added a half shot of Grand Mariner, a quarter shot of mezcal, some shredded basil leaves (another great summer flavor) and a tablespoon of sweet corn salsa I found in the ‘fridge (to add a little kick and some more sugar). I muddled them—successfully this time—and then added 4 ounces of white tequila and 2 ounces of fresh lime juice. To this mixture, I added 4 ounces of corn milk, a couple cubes of ice, and then shook vigorously to blend everything together and produce a bit of froth. I strained the mixture into two chilled glasses. Voila—sweet corn margaritas!

Truth told, it wasn’t that easy. It took me a few rounds of too much tequila, too much lime, and not enough corn before I landed on this ratio of ingredients. And I was a wee bit tipsy. But don’t let that deter you.

Lucius Beebe was a columnist who documented New York café society in the 1930s for the New York Herald. He wrote in the introduction to his Stork Club Bar Book of 1938 that mixing a cocktail is all about individual taste and practice. So, practice away if you’re interested. Delaware’s sweet corn season officially runs from July 4 to October 1, so, there’s still plenty of time to grab a few ears and enjoy the taste of late summer. Cheers! ▼